KKK Billboard In Arkansas: ‘It’s Not Racist To (Heart) Your People’ 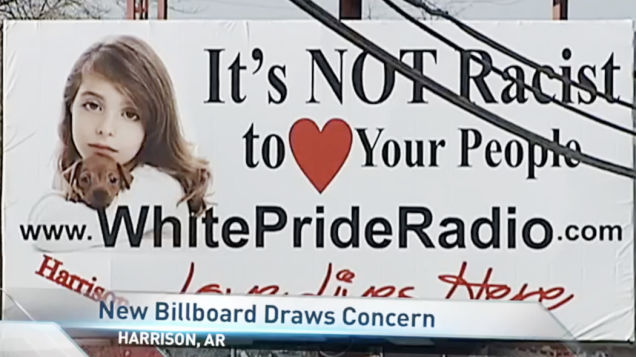 KKK Billboard In Arkansas: 'It's Not Racist To (Heart) Your People'

A KKK-funded billboard in Harrison, Arkansas has declared “it’s not racist to (heart) your people,” beside an image of a...

My folks went through recently and got a shot of the prior billboard:

And the unfortunately named store across the road:

These are certainly salad days for the Klan. They don’t have to figure out march routes, or houses to target: they can just repeat talking points from Fox News in their advertising.

These are certainly salad days for the Klan. They don’t have to figure out march routes, or houses to target: they can just repeat talking points from Fox News in their advertising.

Now I’m wondering what kind of web presence the KKK has these days, although I think I’ll regret googling around to find out.

I abhor this. But at some (deeply disappointed) level, I understand it.

As a middle aged white guy living in the heart of the red belt, I’ve only in the past half decade come to understand what privilege even is, much less come to terms with how it [an awareness of mine] can productively inform my actions. There was some soul-searching and some anger (kind of like the grieving process) as I adjusted my thinking to my new understanding.

I wonder if some of the people who actually believe what that sign says are trapped in that stage of cognitive dissonance where they are blaming the source of the new data for their discomfort.

Again, this is not to condone or excuse or even mitigate how appalled I am at the idea the sign conveys.

Anyway, isn’t the whole “anti-racist is a code word…” thing itself a white supremacist mantra? Code words within code words. I guess no one could accuse them of being self-aware.

Beautiful Town (Horrible Residents)
Beautiful People (Hideous Souls)
No Wrong Exits (If you find any exit from this place, take it immediately)
No Bad Neighborhoods (It’s all equally shitty)

Too bad there’s not room for a third billboard that decodes all of those phrases.

Am I just falling into a roiling pit of confirmation bias, or are the people and places proudest of the ‘white race’ so frequently the ones that aren’t…exactly…shining object lessons in its superiority?

The billboard is for rent! We could crowdfund a third sign below that one…

I’d kick in a bit for that.

No, I think you’re right. I’d say their entire world view (and that of many others) is constructed on exactly that kind of projection, paranoia, and sublimated guilt.

While I have a certain sympathy for people trapped in a town with noxious fascists: few places in America aren’t:

“I would hope more people would stand up and say this isn’t us. We’re not all about this,” the mayor added.

But the last two lines on the Harrison sign really read strongly as code for “no black people” to small town southern whites.

They don’t have to figure out march routes, or houses to target: they can just repeat talking points from Fox News in their advertising. 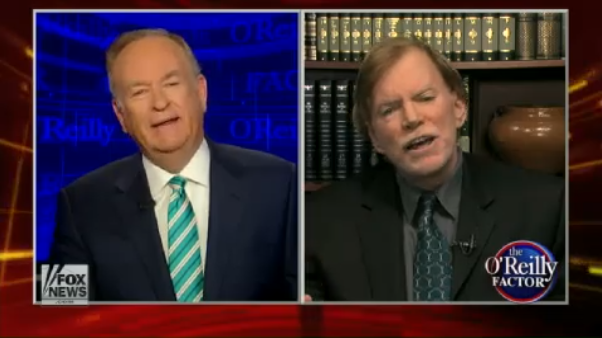 Duke protested, arguing that he was making sure Europeans aren’t “discriminated against” for jobs or scholarships. O’Reilly conceded that those kinds of issues are “being debated all over the place.”

Next, Duke brought up Nelson Mandela, slamming the media’s hypocrisy for attacking Scalise for his connections to EURO but seldom mentioning Mandela’s connections to international communism.

O’Reilly granted Duke’s point that the mainstream media is “sympathetic for the left.”

“You don’t care about the mass media, you know they despise you, and you’re not gonna get a fair shake from them,” O’Reilly said.

I’d kick in for an alternate message below that one. Perhaps one of those Benetton’s ads:

This topic was automatically closed after 774 days. New replies are no longer allowed.