If it’s a teacher’s certification, it’s the PGCE (which Cambridge do offer). You’re correct that it’s not a degree, but I think an American high-school student might not know the difference. It partly depends on the phrasing of this email and how the journalists phrased their question to Cambridge.

There is also the PGCE-MEd programme at Cambridge- but again they are qualified to teach after the PGCE, it just means that they can do the MEd more quickly.

Incidentally, the paragraph I quoted continues:

. Also during the conference call interview, Robertson said she received a bachelor’s of fine arts (BFA) in theater arts from the University of Tulsa (UT) in 1991. The Booster continued to fact check Robertson’s education and contacted UT. According to the registrar’s office, a BFA has never been offered at the institution. The university was specific in the degrees offered; only a bachelor of arts in theater was available at that time, not a BFA.

Given Kansas’s recent budget woes, and the severe cuts to education, someone with a pseudo degree is probably all they can afford. The kids are alright!

I actually did a quick search after I posted my comment. He got all his degrees from Pittsburg State. He’s also spent his entire life in southeast Kansas. His credentials are legit, but a bit insular.

This is easy. Many of the site’s links don’t work, as the articles mentioned. The WHOIS record is strange (the site is owned by Mr. Joe of Standard Engineering, NewYork, NewYork, New York 555NY). But, for fun, let’s Google Image Search the home page slideshow from Corllins’ website.

Thousands of graduates throwing their hats in the air.

That’s a photo of graduation at Wake Forest University in 2014: 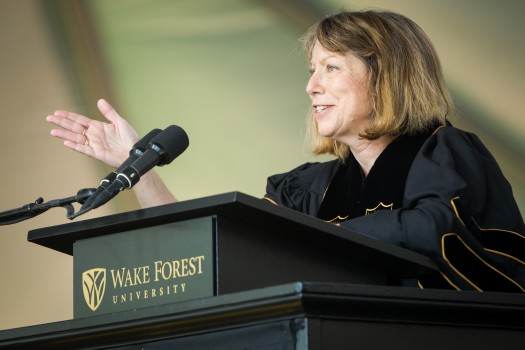 ‘Show what you are made of’

It was the commencement ceremony the entire country was watching. Former New York Times executive editor Jill Abramson addresses the Class of 2014 and members of more than 30 media organizations less than a week after losing the top job at the...

The standard photo of students at corluni.org/images/header2.jpg. That comes up as a header photo for the Student Exchange Programs page at Benedict College.
http://www.bcoip.net/study-abroad/student-exchange-programs/

Another photo of students (header3.jpg) is available from stock photo sites.

It must be exhausting, spending your life waiting to get found out.

People worry a lot about the Millenials and younger people, with good reason given the environmental and economic hands they’ve been dealt. Stories like this give me hope that they’ll find their way through.

It must be exhausting, spending your life waiting to get found out.

It might be. Maybe someone will ask at the next White House press conference…

They have two websites, and the seemingly older of the two uses the least convincing stock photos:

They even provide their degree holders with a service whereby they’ll assure potential employers of the degree’s authenticity for $199 / year.

So who goes to jail for crap like this?

In a world where it seems most people don’t know the difference between “then” and “than,” your Ivey league degrees are as good as any, ok!

Just did a quick LinkedIn search - there are 751 people who list Corllins University as their alma mater. Fortunately no one I work with or any 1st degree connections. I see IT Directors, salespeople, recruiters, “Legal Advisors”, engineers (!), etc. all over the world at big, well-know companies.

“I went to Corllins. It’s a small private con arts college. I graduated with dishonors with a major in grifting and a minor in cheating. We almost beat Trump U at the long-game championships couple years ago.”

Something that might explain the Cambridge Forestry degree is that at least here in Germany forestry is considered possibly the poshest of all degrees.

I say this as someone who took a graduate level forestry class.*

*Technically a math class, but co-listed under forestry.

Sounds interesting. Was is anything like the course Tom Leinster is running at Edinburgh on Biological Diversity/Functional Equations/Entropy? They are posting some discussion on the n-Category Café:
https://golem.ph.utexas.edu/category/2017/04/functional_equations_ix_entrop.html