It is no secret wild pigs are decimating everything from crops to whitetail deer populations. Some people say ask, "Whitetail deer?" Yep, if wild pigs come across a fawn, they will kill and eat the fawn. Here in southeast Texas, a decade ago it...

I can think of one solution. 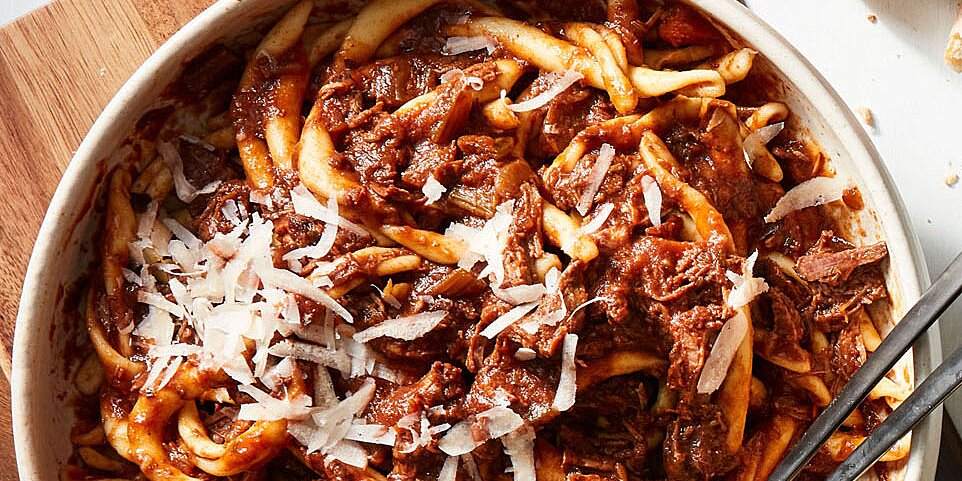 This ragù is a sneak-peak into Rach's newest book, Rachael Ray 50.

I have had wild boar sauce on pasta twice and it is delicious.

Some people say ask, “Whitetail deer?” Yep, if wild pigs come across a fawn, they will kill and eat the fawn.

I don’t know that we can take it as a given that an animal is harmful to the local ecosystem because it kills deer. In that respect aren’t they filling a biological niche once filled by other predators that have been largely eradicated by humans?

Hogs are the ultimate opportunists and deer are effing stupid.

In October 2020 I saw Blitzen and Cupid run full speed through a field and Blitzen rammed itself onto the hood of an sedan in front of me. Luckily it was a slow afternoon so a pileup didn’t happen.

While I think nobody really needs to own automatic weapons, I have to admit I am OK with them being used to eradicate an invasive species, particularly one like this.

Shooting the hogs only makes them mad.

Seriously though, simply killing the beasts one by one is ineffective, as more will move in to fill the void. (Much like the law of conservation of squirrel mass.) The preferred method is to trap whole groups of, say, 30-50. Missouri employs 5 or 6 full-time feral hog trappers, with reasonably effective, though slow success so far.

full auto would be a waste of ammo, as the accuracy drops. sure “spray and pray” works,

but a hunter with a semi-auto, or even a lever action, will be much more effective against feral hogs - an invasive species, that breeds rapidly, and sestroys everything in its path. Which, btw, were initially imported (long ago) and released for sport…

Feral hogs (Sus scrofa) are an old world species belonging to the family Suidae, and in Texas include European wild hogs, feral hogs, and European-feral crossbreeds. Feral hogs are domestic hogs that either escaped or were released for hunting...

Using an automatic (or semi-automatic) weapon to shoot dozens of feral hogs at a time is an ammosexual fantasy scenario, not an actual hunting practice.

Not to mention needlessly cruel. That kind of approach would surely cause many painful but non-fatal wounds and you’d have a lot of suffering animals run off into the bushes where they wouldn’t be caught right away. Real hunters carefully aim for vital organs for a quick end to the animal.

I have seen the technology to pen a dozen or so of them at once has been progressing.

My dad was in vegetation management for like 40+ years of his life. All kinds of things put somewhere it shouldn’t because they were pretty or could be used for a specific purpose later got out and just took over ecosystems they shouldn’t be in.

used for a specific purpose later got out and just took over ecosystems they shouldn’t be in.

The US used to pay people to plant kudzu to prevent soil erosion, now we have forests that look like this:

One of the rocket engines at the Cosmosphere - I believe from an Atlas? It has been too long.

Anyway, they found it covered in Kudzu in Alabama, IIRC.

Lots of plants brought over for ornamentation are just out of control. Like Honey Suckle in Kansas.

that an animal is harmful to the local ecosystem because it kills deer.

Somewhat critically. Deer are pretty harmful to these same ecosystems, down to insane over population.

I don’t think hogs are eating enough deer to impact populations though.

with them being used to eradicate an invasive species

Hunting and culling are pretty bad methods to do that. It’s useful as a spot treatment, more for moving groups of hogs off problem areas than impacting overall population.

Bait stations to poison or sterilize them. As well as trapping. Either for sterilization and release, or for slaughter is far more effective. And costs less than culling programs to boot.

Sterilization via bait stations has had very good results with White Tailed Deer in pilot programs in the North East/New England. Better than poisoning or trapping. But eradication isn’t the goal there.

but a hunter with a semi-auto, or even a lever action, will be much more effective against feral hogs

Not really. They scatter the minute the gun goes off. Some use that to argue for silencers.

But apparently bows and cross bows are way more effective, because they don’t startle the entire group.

Best case scenario with that sort of culling is “hey we killed 10!”. A poison bait station can take out the entire sounder. Which can be hundred of animals.

Using an automatic (or semi-automatic) weapon to shoot dozens of feral hogs at a time is an ammosexual fantasy scenario, not an actual hunting practice.

True, it isn’t a hunting practice, but it was, at least back in the 80s, one way to deal with the huge herds of deer that were devastating the crops in rural Wisconsin farms. Some relatives got word from neighors while I was visiting that a couple of hundred deer were headed their way: they called the local game warden, who gave them the ok to hunt with semi-autos out of season, and even showed up a while later to help cull the herd. Even with a half dozen men shooting they were only able to cull about 50, and then we had to haul the corpses out to the road for the county to pick up and dispose of. The corn crop was, in the end, a total loss because of this and other mass invasions by deer.

My suggestion of reintroducing mountain lions and bobcat to the area was not received well.

My suggestion of reintroducing mountain lions and bobcat to the area was not received well.

Farmers tend to not be keen on the introduction of predators.

Given how environmentally destructive - and dangerous - feral hogs are, I was rather surprised to read how big a problem people deliberately introducing them to different parts of the US is. Not in the past, when people were ignorant of the problems, but now, by people who know what they’re doing is incredibly damaging, but don’t care because they want to hunt. (Hello, climate change metaphor…)

In that respect aren’t they filling a biological niche once filled by other predators that have been largely eradicated by humans?

Not so much. They’re not mostly predators, and the animals they do eat are small (i.e. also eaten by predators that weren’t eradicated by humans). And they eat everything else and reproduce quickly. So they’re just introduced pests, damaging to the environment, not re-filling any emptied ecological niches.