Great. Go you. Write a directive to that effect!

But everyone deserves to decide that for themselves and their families, even if that’s put off due to a pandemic.

Burying the dead seems to create a a long term issue when it comes to space for the remains, that’s where my thought process is coming from but i am aware that crematoriums will be unable to keep up with the number of deceased. From what i know China had the same issue despite them working day and night.

It’s scary to think about though, i hope everyone here and their loved ones stay healthy and safe.

NYC maintains multiple public cemeteries (potters fields) for unclaimed bodies, prisoners, and stuff like this. Most of them are technically city parks or managed by the parks and prison/jail systems. So it’s likely that’s what they’re talking about.

There’s also a bunch of parks on the Islands that dot the area that aren’t open to the public and aren’t much used for anything. And sadly this is a thing for which there are already contingency plans. It’s likely the parks in question are those areas that are already ear marked for this sort of thing. As the existing potters fields are already sort of tapped out.

Think about that. It’s pretty early in this thing and our largest city has already filled up it’s depressing public cemetaries.

You’d think there were contingency plans from the cold war era; they used to have a plan for every “unthinkable” scenario a sick mind could come up with.

There are plans for scenarios exactly like this. What we’re missing is competent execution. Pandemic planning has been a government staple for ages.

Probably not every person that will pass away will wish it but i think it’d be better to cremate the dead than bury them when possible.

Cremation is slow and irreversible. Burial is faster and when things settle down it leaves the possibility of families opting to follow other mourning practices, either through transferring the body or cremation. The space issue is not really more pressing than it is for any other burial. It is more of a logistics bottleneck than a absolute resources issue.

In powerful show of defiance of #coronavirus scare, huge crowds gathering in NYC’s Chinatown for ceremony ahead of annual #LunarNewYear parade. Chants of “be strong Wuhan!”

Yes and check the date on that. New York wouldn’t have a case for another month. Showing support for the people who were actually suffering is a good thing. That image has been passed around in right wing circles to pump up sinophobia.

New York wouldn’t have a case for another month.

Wouldn’t have a known case for another month. But… since testing was so restricted in the early days of the tests, it’s sure to have been spreading before then. Note the first confirmed case was a healthcare worker. She probably got it travelling, or from a patient. And tests are still restricted, so there are for sure people who are infected that aren’t getting tested.

It’s an indication that leadership wasn’t taking it seriously. It’s not: Chinese people bad. It’s: why the hell was huge crowds gathering a good thing? Why call it a “scare”? The US already had 12 cases at that point, and not all of them were evacuees from Wuhan.

Given what we know of incubation periods for COVID there is no reason to think that event served as an infection vector. https://www.sciencedaily.com/releases/2020/03/200317175438.htm 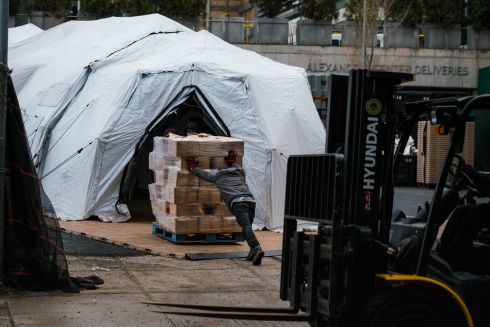 "When we train, we never really think that it's going to be more like real life, like a virus," said Staff Sgt. Gabrielle Bellina.