Well, not that shocked.

Only shocked that they actually managed to get it struck down before November.

North Carolina said this IN OPEN COURT and thought it was okay. https://t.co/qonanLiep1 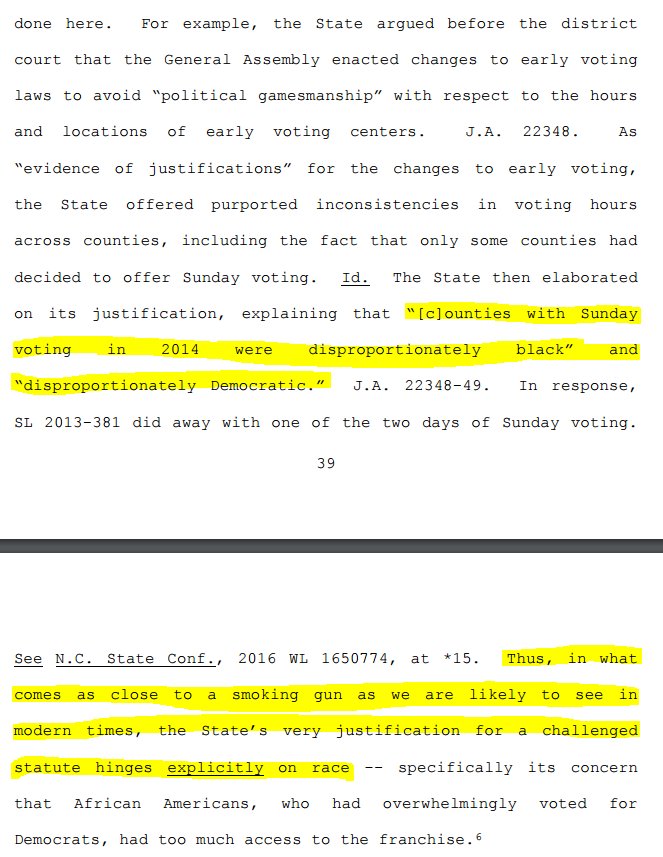 Do most states allow voting without showing any ID?

Voter ID laws in the United States are laws that require a person to provide some form of official identification before they are permitted to register to vote, receive a ballot for an election, or to actually vote. At the federal level, the Help America Vote Act of 2002 requires voter ID for all new voters in federal elections who registered by mail and who did not provide a driver's license number or the last four digits of a Social Security number that was matched against government records. T...

Notice of course that many of the ones with the most harsh voter ID laws also have large African American populations.

Poor North Carolina, All they wanted to do was get back to hating and hurting the traditional targets of small minds and the whole damn world calls them out on it and took their laws away. No wonder they’re pouting. Nobody will come play ball with them and they got queers peeing in whatever bathroom feels right for them. No wonder they feel so sorry for themselves.

And now, the people responsible are going to be fired, fined, jailed, barred from having anything to do with public office?

I doubt this will be the last attempt at voter suppression but at least this was nipped in the bud.

I get that the NC law seems to have been passed with a racist agenda. But in states that do not require any ID to vote, what is keeping people from voting lots of times at different polling places? I do not know much about this, except what I have read recently. I kind of get a deceptive vibe from arguments on both sides, and would like to be educated objectively on the issue. I did read the Brennan study, but found it incomplete.

You seem to get consistently “suspicious” on a not-objective selection of topics.

Everything you need to know about the voter ID controversy

Are voter ID laws a ploy to disenfranchise minority voters — or a useful tool against election fraud?

Registration. You have to be on the voting rolls in order to vote. So if you want to go around and vote a bunch of times you’ll have to impersonate someone registered at each of the different polling places you go to. And you have to hope that they don’t actually show up to vote and discover that someone else already voted in their name.

So yes, it is theoretically possible to a very limited degree that is completely out of proportion to the “voter id” remedy.

I don’t know about your “vibes” but the deception is demonstrably on one side. These voter laws are being justified by the idea of fraudulent voters - people who aren’t registered voters who are voting, or registered voters voting multiple times - that have been thoroughly investigated and found to be factually untrue in any significant number (i.e. not more than three times in 20 years in one state, for example).

Some of these people have no concept of when they should be ashamed, do they?

Two things:
First when you register, you’re on the voting roll for your polling place. You can’t just wander to another polling place you’re not registered for. And you have to show your voter registration card.
Second, the felony and massive fines for vote fraud are a pretty good deterrent. It’s a very high risk, low reward crime.

Voter ID doesn’t really solve a problem with the voting system as it’s implemented (other than the perceived problem of the poor, minorities, the elderly, and students voting). If someone shows up and uses someone else’s name at a polling place with a fake registration card, then not only will election officials quickly know and investigate, but there’s no possibility of that being abused as anything other than a one-off.

We manage to stop that from happening in Britain

Electoral registration in the United Kingdom

Electors must be on the electoral register in order to vote in elections and referendums in the UK. Electoral Registration Officers within local authorities have a duty to compile and maintain accurate electoral registers. Registration was introduced for all constituencies as a result of the Reform Act 1832, which took effect for the election of the same year. Since 1832, only those registered to vote can do so, and the government invariably runs nonpartisan get out the vote campaigns for each el...

Some of these people have no concept of when they should be ashamed, do they?

This shouldn’t come as a surprise given the laws that North Carolina has been passing lately–and not just ones related to voting.

I…I did not even know this existed, but the cast is awesome!