According to the sheriff’s office, the animal was put down and will be tested for rabies and other diseases.

ETA: it does look like the law as written is pretty unequivocal on the topic though.

Ownership of raccoons and skunks is prohibited. A person may not keep a skunk or raccoon in captivity. […] Any animal kept in violation must be confiscated and disposed of.

She should have skedaddled the second she was asked to leave. Poor little trash panda.

The cruelty is the point.

the law as written is pretty unequivocal on the topic though

Yeah, raccoons have a very high rate of rabies. 30%!

I would think that even if she found it as a baby, it would still have a very high risk of being infected.

Map and Links on Wild Animal Rabies Surveillance in the US

Huh, I thought rabies usually killed the carrier within a matter of days but apparently the virus can take longer to reach the brain and become infectious than I realized.

I do think its tragic that they had to kill the animal. Though from what i checked online blood tests on animals is not reliable enough to determine if they’re infected or not and a brain tissue sample is needed. That sucks and would hope that there would be a better way to check that doesn’t involve killing an animal

ETA: it does look like the law as written is pretty unequivocal on the topic though.

Ironic that these guys seem to have an easier time as pets in countries where they’re an invasive species. 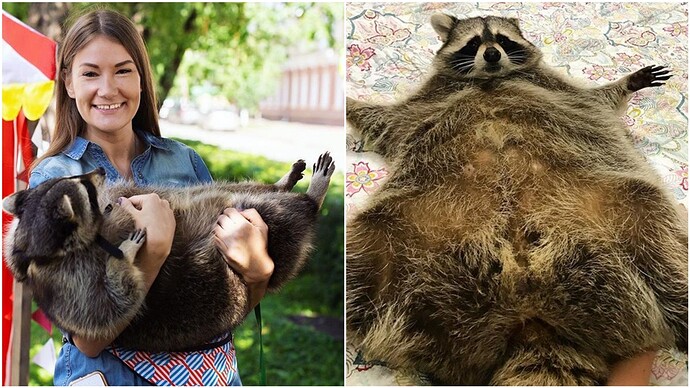 Tema, the king of Russian raccoon Instagram, is a breath of fresh air. 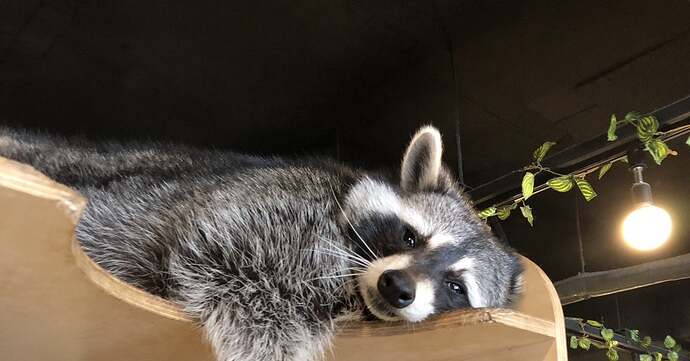 There's Literally A Raccoon Cafe In Seoul, Korea And It Will Change Your Life

This is not an overstatement. I'm serious. Your life will be changed.

Guns, of course, are always welcome in the bar.

Trash Pandas break the ice at parties. Experience tells me so.

“I took him to the zoo, now we’re at Happy Hour and later we’re going to catch a movie.”

In Frank Herbert’s Dune Universe and ConSentiency Universe, mentioned here and there are Bedogs and Chairdogs… dogs bred for size, shape, and disposition to be beds and chairs for those who could afford them. That racoon could be a pillow.

It may seem cruel, but it really is for public health. Rabies is no joke. There is a vaccine, but if you get infected and don’t get it soon enough, you die. IIRC there has been one person in the modern medical era that has survived rabies.

Yup. Clutching your pearls about this has a whiff of anti-mask/anti-vaxx about it. As in; “All we’re saying is that subjecting others to the risk of rabies should be a choice”.

She should have skedaddled the second she was asked to leave. Poor little trash panda.

Poor little trash panda indeed. However the perpetrator is not the state here, it is the woman who chose to keep a wild animal in her home and treat it like a pet, very much against that animal’s best interest.

This is not a case of the state being bastards. Wild animal laws exist for good reason and people need to stop getting their understandings of nature from Disney movies.

DON’T FEED WILDLIFE. Domestication is not “being nice to things” and animals can’t be pets just because you really really want them to.

Rocky Raccoon, went into saloon
Only to be uninvited
He had just one drink, got thrown in the clink
And killed though he no one had bited.

I think that person was saved via medically induced coma as a last ditch effort. Let the body do its thing, without going into shock and the person dying, or something like that.

Personal bias confession here: I’ve lost too many of my backyard chickens to raccoons to spare much love for them. Even their poop is evil.

Yes, that is right, IIRC, But it hasn’t been a repeatable cure. Someone just got super lucky.

What is the deal with their poop?

Very sticky and filled with parasites. Must be handled as hazmat.

Generally correct, but I’m going to continue to feed the backyard birds.

Feel free to chuck me a cheese burger every now and then as well.