Has Christopher Lloyd played a young man? Of course he has! On Taxi, he played a younger version of his character - Jim Ignatowski - while he was a student at Harvard. We saw the moment when he consumed The Fatal Special Brownie that altered the course of his entire life.

I didn’t expect to see that it’s not okay for humans to find Jessica Rabbit attractive on Boingboing. Sounds like some conservative prudish opinion there. Most people find themselves attracted to fictional characters from stories Don Juan to Fanny Hill to Lady Chatterley’s Lover. Switching to another medium like comics or animation doesn’t change that. It’s completely human to find fictional characters attractive. It’s only non-humans for which fiction doesn’t mean anything.

Are you sure you’re human?

1: You are totally allowed to be attracted to Jessica Rabbit what the hell. Next you’re going to tell me that it wasn’t hot when Bugs dressed up like a girl bunny.

2: Freaking Judge Doom man. He gave me nightmares when I was little and just seeing that picture makes me think it’s very likely I will have them again tonight. The scene where he dips the shoe…easily one of the most disturbing things to happen on film. Those eyes. Yeesh.

Also Doctor Who let the dogs out.

China Town was supposed to be a trilogy.

I was very upset that they terminated the series based on the box-office performance of The Two Jakes. Then Who Framed Roger Rabbit came out…I caught it on video & thought it was a worthy and well-made conclusion to the trilogy.

However, Who Framed Roger Rabbi was really, really, lame. Ron Jeremy does not make a convincing rabbi, among the raft of other problems the movie had.

I still can’t believe anyone in Hollywood could have watched this movie and still decided that Arnold Schwarzenegger was the best choice out there to portray Mr. Freeze.

The animator on that film, Richard Williams, did this movie to fund his masterpiece, the Thief and the Cobbler, which sadly was never finished.

The Thief and the Cobbler

The Thief and the Cobbler is a British-American-Canadian animated fantasy film directed, co-written and co-produced by Canadian animator Richard Williams. The film is known for its long, troubled history. Due to independent funding and ambitiously complex animation, The Thief and the Cobbler was in and out of production for over three decades. It was finally placed into full production in 1988 when Warner Bros. agreed to finance and distribute the film. Negotiations broke down when production Wi...

Link to stills and tumbler: 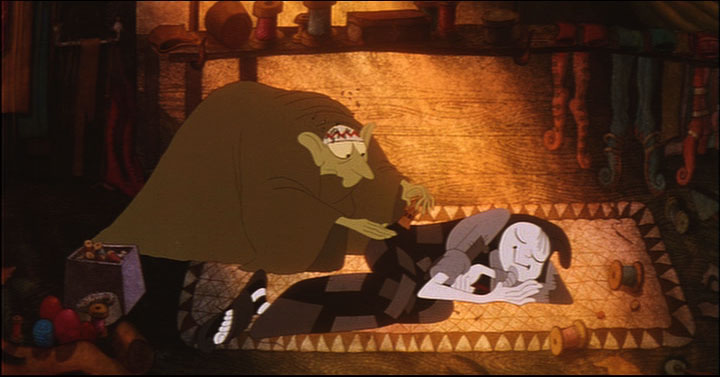 The Thief and the Cobbler: Recobbled Cut Mk4

Alex Williams, who animated on The Thief and the Cobbler and is Richard Williams’ son, asked me to write up an interview for his blog. As usual I wrote something extremely long. I can’t seem to help...

I find it hard to believe Christopher Lloyd has never played a young man, since he’s played everything.

However even if he hasn’t there’s still time.