NYT jumps on our smelly old 'I don't use soap' bandwagon

My wife and I have been not using soap for over a year. My hair is decidedly NOT greasy, nor is hers. We don’t stink - though I do use a fragrance made from oils when I am working in my photographic studio - I get pretty exercised during sessions with kids - all the running back and forth is a work out, trust me!

I don’t have any magical cured-me-from-cancer-and-a-bad-stepmother stories, it’s just easier (less gear), and we don’t smell like the detergent aisle at the grocery store.

We stopped because we wanted to reduce the overall load of crap that our bodies run into daily, and putting a LOT of stuff directly on your skin is a heck of a load overall.

The only soap I do use is when I shave using olive oil and then wash that off using some Bronner’s soap, and a scrub with a washcloth.

And, yes I use soap to wash my hands all the time, though I absolutely DESPISE the smelly crap soap in most public restrooms. Yech! What DO they put in there?!

And, just to totally send many people over the edge, we eat raw eggs, raw milk, and meat from our friend’s non-USDA ranch. Horrors! We’ll die of everything!! :- )

I have no idea whether or not bathing with soap and shampooing is harmful. All I can say is that from my own anecdotal evidence, I have extremely greasy skin, and if I go a day or two without showering, my forehead erupts in acne. If I go longer I develop acne all over my body.

I’d rather shower once a day with a mildly irritating shampoo than deal with painful, scarring, disgusting pustules of rotting sebum covering my body.

I shower daily - just without soap.
Nice warm water and a happy scrub with a roughish washcloth is great!
I can;t go without a shower every day - my chest gets a little rashy thing on it if I miss a day or two.

Well, I don’t shower (or even use soap) every day. But I definitely don’t go a year without it/them.

However, I’d hazard a guess that Sean Bonner - …a Los Angeles based entrepreneur, journalist, activist and enthusiast… - doesn’t often do work that leaves him coated with food, grease, chemicals, gyprock dust, or, um, sweat.

/I bet he’d be fired on the spot if he had to earn a living as an employee, say in a kitchen, and refused to use soap.

As Sean remarkably wrote it : YMMV ! I, for one, have a skin that stinks if I don’t wash (with soap) every 2 days. Regarding soap, I have found that very natural soap (that is soap obtained by oil and lye, i.e. alep soap and/or marseille soap) is way better for me than whatever P&G or Unilever are trying to sell us. Most ‘brand’ soaps either dry my skin or give me acne.

No one around here wastes water in this manner. Good sand scrub. That’s the best that we can hope for. 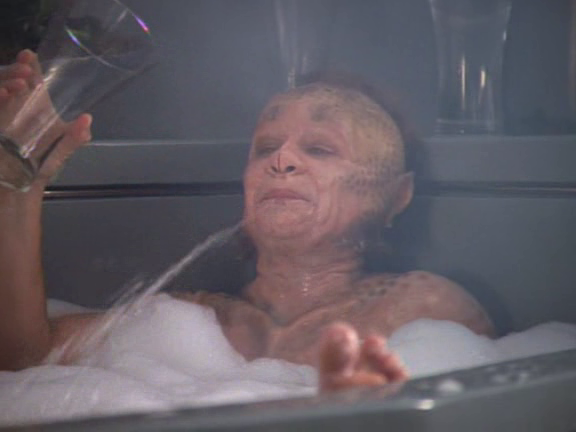 Since I originally read that article here on BB in 2011 I stopped using showergel and shampoo (though still use soap to wash my hands) and it’s been great! No greasy hair or general smelliness. No need to remember to buy/pack shampoo etc.
If a conversation ever arises about it, eg when I get a hair-cut, the people I mention it to don’t think I’m weird or anything, they usually nod and agree that they heard the body takes care of itself and congrats to me for giving it a go.

I’m not doing it to help the planet or anything, I’m just plain lazy

I never used to use soap on my body, but I had a nice bar I put in the shower and added to my routine. I am 100% sure I have gotten smellier, and while it could relate to living in a much drier environment, I resent it. That said? The “your scalp will balance out the oils” is a lie. I really wanted it to be true. I gave it months. But the fact is that different people have different hair types, and the amount of oil that does not register as greasy for coarser hair makes my fine hair look like tar sands crude. Also, since dating a guy who had very … different standards about these things, I trust none of y’all’s personal anecdotes. Maybe you don’t notice your hair being greasy, and people have been polite in mentioning nothing… Here’s the thing: even if there’s an amount of grease and stink that’s Natural or ideally Healthy, that isn’t necessarily the amount of grease and stink which manifests to the modern nose as inoffensive.

Aren’t there lots of places where people don’t have access to showers and soup? Do they have these bacteria on their skin?

Should be easy enough to test.

Get a job, hippie!

I take it a step further, and don’t bathe at all. At least, that is to say, I don’t like to get wet. Instead, I prefer to roll around in the dirt, and will occasionally rub horse dung into my hair. I’ve never felt better, and people are often excited when I come to greet them. One whiff of my coat, and they know I’m a real dog.

When our area had it’s water cut off for a couple of weeks, we basically washed at the sink with a small amount if water. But when the water came back on and I had a shower at last, it felt like I’d lost a lot of oil from my skin, and it didn’t feel right. I love showers though, so it won the argument.

I couldn’t do it. Soap helps my razor work without painful pulling and makes my bunghole feel fresher. I use a nice rosemary shampoo in bar form made by Just Soap as a dual purpose shampoo and soap to reduce the hassle of multiple products. I learned from a Cuban doctor in Miami on the radio that milk of magnesia is a safer deodorant and that along with shaved underarm hair keeps odor down.

Does anyone else see some parallels between those who don’t use soap and those who refuse to have their babies vaccinated? I mean, really the Blissfully Unwashed are just vectors for disease that rely on everyone else washing regularly to prevent a major pandemic…

Yeah, what on Earth are those surgeons thinking? Lister is Hitler!

Which pandemic-worthy bacteria or virus live on unwashed humans long enough to be a danger to others ? Not counting doctors and people in food preparation.

Also, you confuse not using soap with being unwashed. I’m a soapist myself, but as I understand the principle, it’s about using plain water and mechanical means in favor of water and chemicals processes.

Influenza, for one. Flu pandemics can kill thousands, or even millions. There are lots of others, of course - e coli, bacterial meningitis, strep, staph, etc. And I don’t even want to get in to the venereal diseases… Every bacteria or virus is assisted through a lack of washing. And water alone doesn’t prevent transmission, as the mythbusters recently showed.

I was being somewhat cheeky when I suggested that those who don’t bathe are equivalent to antivaxers, but I think there’s some truth to it. They seem to me to be people who think that somehow their natural state is “clean” and that they don’t pick up or transmit germs to others. That seems willfully ignorant of how germs and disease are actually spread, and if it were practiced by everyone, I think it would likely result in higher infection rates for a whole host of diseases that can be easily prevented by washing.