NYT: Trump inquired about adding his face to Mount Rushmore 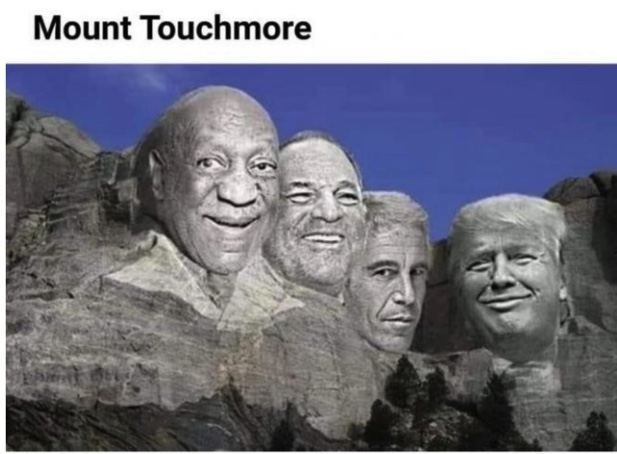 He can make all the lasting monuments to himself he wants. It shows a lack of foresight, I think, that he wants these things, with no clue what is going to happen to them brief moments after he is out of power. He might as well just forget about having a Presidential library.

last year, a White House aide reached out to the governor’s office with a question, according to a Republican official familiar with the conversation: What’s the process to add additional presidents to Mount Rushmore?

It’s amazing they believe there’s a “process” in place for something that’s never been done. The existing sculpture was designed around those four Presidents when they started the work. The four were selected specifically to represent the nation’s birth (Washington), growth (Jefferson), preservation (Lincoln) and development (Roosevelt).

The idea that there’s some kind of application to fill out to get someone added to the mountain is so stupid that it’s hard to imagine anyone but a Trumper conceiving of it. It’s literally cartoon supervillain nonsense.

I’d never heard this before. Of course, if that’s the logic, I could see how Trump would fit in. (Although we’d probably need one more president before him, decline then destruction.) 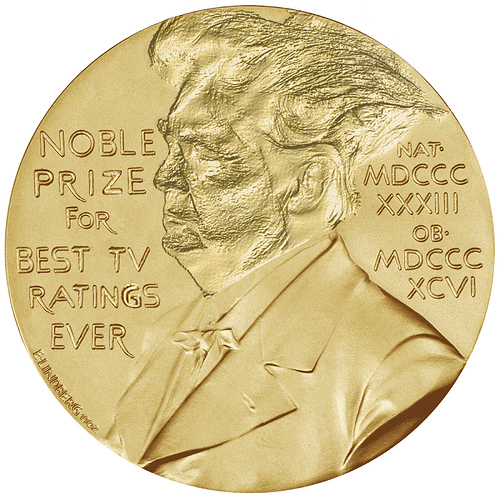 I’m all for it, so long as we respect the tradition that only dead presidents go up on Rushmore. In that case right away.

Because of course he did.
The only place where his fat orange mug should be placed is the inside of a pissoir.
I mean he DOES enjoy water sports, or so people say.

Oooh, a Trump Presidential Library. I can see it in my mind: a Tiny Free LIbrary, sitting on a post at Mara Lago, with nothing but copies of “The Art Of The Deal” that nobody has ever looked at. 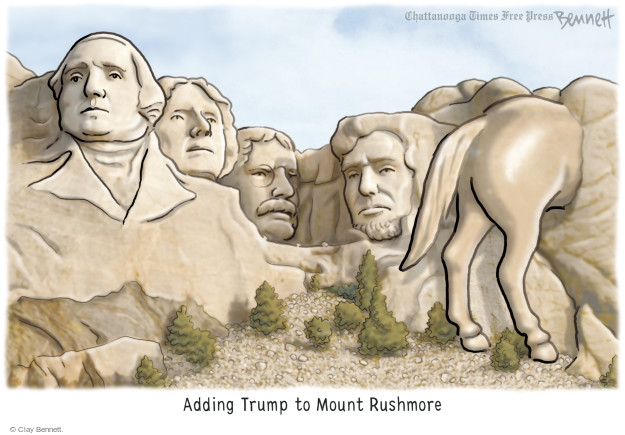 (I recall a cartoon, maybe from Playboy magazine, of Reagan being added to Mt. Rushmore, that showed an actual puckered sphincter to the right of Lincoln. Image search isn’t bringing it up.)

They’ll be there for Mein Kampf and deep dives into the Q archives.

You people are WAY too sensitive. There’s no better way to MAKE AMERICA GREAT AGAIN than by putting Trump on Mount Rushmore!

Trump tweeted out this picture, and all I could think was, if they added Trump’s head to the mountain, making this expression, future generations would blow the whole thing up just to get rid of him: 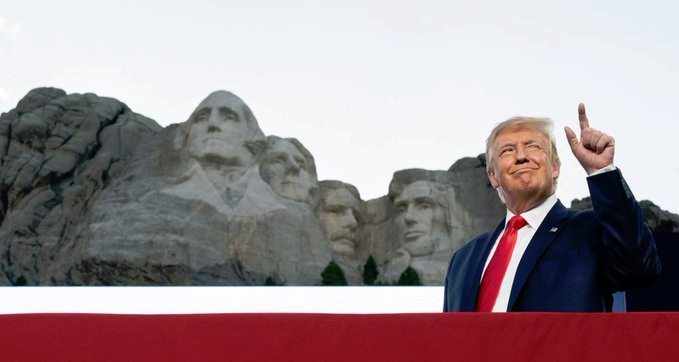 Also, I’m just reeling at Trump thinking this made him look good, or that he was comparable to anyone up there, as fucked up as they were. That Trump thought he could essentially buy his way onto Rushmore via the state governor is the kind of venal idiocy we’ve come to expect from him.

Yes, I would be totally in favor of him being suspended in some way on Mount Rushmore.

I love how he truly seems to believe he’s achieved anything (positive) during his time in office.

Trump’s idea of an accomplishment is pretty open ended. This is real and available on the whitehouse gift shop web page. 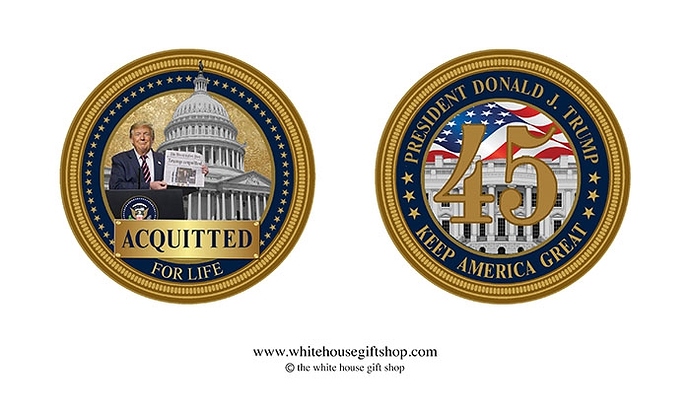 You’ll have to link it. I can’t believe this is real. And I’ve seen the North Korea nuclear deal challenge coins on there that were released before there was a deal which never materialised.

How strange, I had no idea that existed:

" White House Gift Shop is a gift shop that was founded on 1950 during the Truman administration. The headquarters is located at Lititz, Pennsylvania since 2012. However, the gift shop has no connection with the White House.[1]" 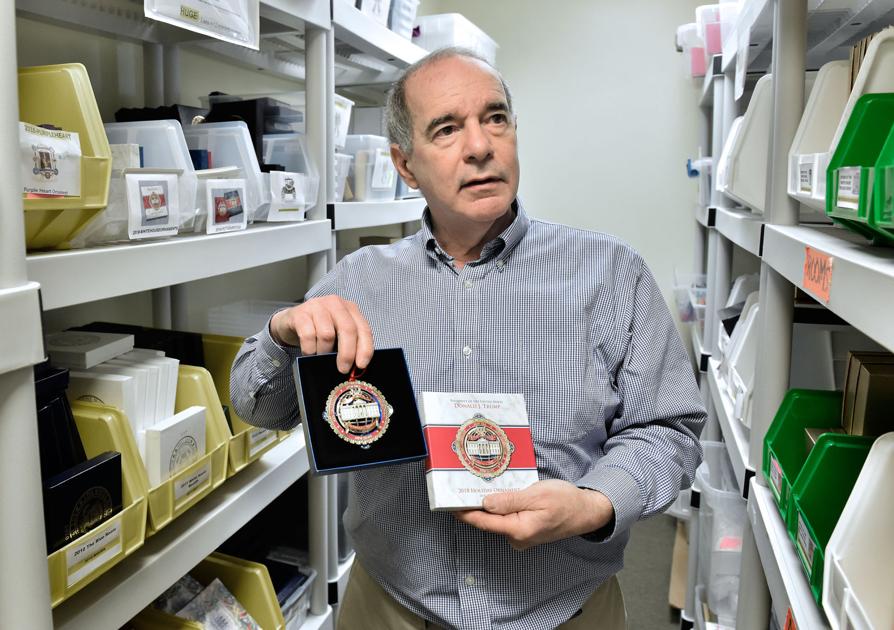 From 1600 Pennsylvania Ave. to Warwick Center: How the White House Gift Shop...

After a summit was announced early last year between President Donald Trump and North Korean Leader Kim Jong-un, the White House Gift Shop unveiled plans for a commemorative coin to 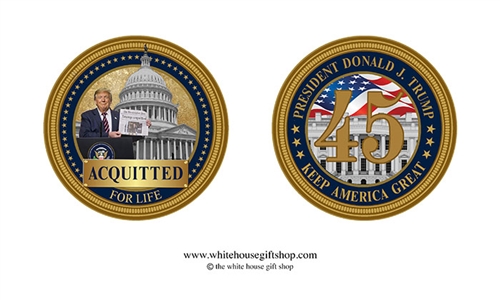 The Aquittal of President Donald J. Trump, 45th President of the United...

Coin and Medallion with presidential seal presentation case. Title: Impeachment & Aquittal of Donald J. Trump, 45th President of the United States. Coinage design by artist Anthony Giannini who is the maker of the Trump & Putin challenge...

It’s amazing they believe there’s a “process” in place […]

They probably think its’s like getting a star on the Hollywood Walk of Fame, only yuuuuuger.

Ugh. I appreciate the sentiment, but, wow, this must be the most American thing I have ever seen. This is Soviet level stuff.

And this! I had no idea you could capture gloating in jewelry form!