On conservative attempts to co-opt MLK

I hope people take the time to read some of the pieces they site, because, hey, it’s typical Gawker linkbait.

Or, you can use the fact that King won the legal battle against segregation as a segue into a Booker T. Washington-esque call for black people to turn their attention away from what is being done to them, and focus exclusively on self-improvement

horribly misrepresents what John McWhorter said in the post as a whole. Go ahead and read it; it could be that his piece is full of straw men and poorly-made conclusions, but he’s not calling on black people (a group he’s a member of) to exclusively focus on self-improvement. But he seems to have hit the nail on the head with relation to Gawker’s reaction:

Too many blacks seem to have internalized just that: The essence of contemporary blackness in America is eternal indignation. Notice, for example, the fire-breathing hostility that against-the-grain black writers attract from other blacks. As I know from personal experience, these writers are accused of tempting whites into some kind of antiblack backlash.

Instead, in recent years, the black middle class has flourished. Housing segregation for blacks is the lowest it has been since the 1920s. And a black president has been elected twice. Yet the fury persists, since what actually rankles these critics is the threat to what they feel is their very identity: underdogs with a bone to pick.

And as far as I know, King never called for a perpetual state of government-enforced anti-discrimination and reparations, he called for a helping hand, a boost to get poor black people out of the mire. The thing is, if someone throws you a lifeline to save you from drowning, you’ve got to grab the rope and hang on.

There’s at least 3 tenets of just the I Have a Dream speech that have clearly been moving the the wrong direction for years largely thanks to the GOP.

Looks like we still need a fair amount of federal government enforced anti-discrimination to me.

Everyone is trying to co-opt MLK - even the Neo-Liberals aka the leadership of the Democrat Party. See, The Dreamer with a Kill List

Baraka Obama is the great prize, the racial victory that must be
defended at any and all costs. The collapse of the Black economy, the
evisceration of the Constitution, mass Black incarceration, multiple
and constant U.S. wars against weaker peoples – none of this can be
allowed to tarnish or undermine the embodiment of Black progress,
Barack Obama. Which is why it is perfectly logical to Sharpton and Ben
Jealous and their ilk that Obama star in the March on Washington
commemoration, as both the symbol and the personification of “The
Dream.” It is the dream of those who want nothing more than to become
full-fledged partners in U.S. imperialism.

Frankly, I find conservative and “liberal” attempts to co-opt King offensive. The right pretends to wrap themselves in his mantle in order to bask in the glow of his righteousness. But so does Obama and the democratic “leadership” class. Obama is no MLK. MLK would be horrified at most, if not all, of Obama’s political positions and acts: his blatant imperialism, blind support for the criminal capitalist corporate state, and utter disregard for the new jim crow and civil rights and protections. What have we achieved when we have a few token “black” men in powerful positions trampling down the poor black, white and brown citizens they nominally represent? Obama is a travesty, and MLK would’ve said so. The shameless, unhinged and morally vicious right wing is a joke, and if they want to pretend King’s project is complete they may as well do so for all anyone listens to them anymore.

The sheer audacity certainly differs; but even the oh-so-enthusiastic-about-King segment (If I may be so bold as to suspect that a black faculty member whose office is plastered with posters celebrating various black American notables, King definitely not excluded, and a pan-african flag in one corner, is a member of such a segment) seems to do a bit of whitewashing about some of King’s economic policies. I know that my (relatively liberal) schooling on the subject was of the “Dr. King as an inspiring fellow who, correctly, thought that Civil Rights and Tolerance, and Equality for all were pretty excellent.” flavor, with some very…tactful… elision of his positions on labor organization and all matters economic.

I watched a local area that had historically extremely high incidents of Klan violence vote overwhelmingly for a black President, twice. Times have changed. The differences between Democrats and Republicans over race, in three charts

A Pew poll shows most Republicans say the country has made "a lot" of progress. A majority of Democrats say they see shorter strides.

And as far as I know, King never called for a perpetual state of government-enforced anti-discrimination and reparations, he called for a helping hand, a boost to get poor black people out of the mire. The thing is, if someone throws you a lifeline to save you from drowning, you’ve got to grab the rope and hang on.

I don’t think anyone supports a perpetual state of whatever, but MLK most certainly did support things like Affirmative Action because you don’t go from 300 years of oppression to equal opportunities just because things like forced segregation are changed in the lawbooks.

Once you factor in the fact that people with “black names” are still far less likely to get the same jobs as whites (source, source), it trumps all the arguments about dismantling things like Affirmative Action today until this changes.

More on this in regards to MLK: 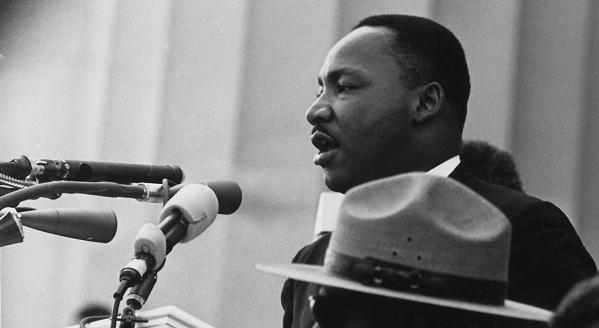 Gary Younge on ‘I Have a Dream,’ Susan Ohanian on Common Core

Media are flooding with coverage commemorating the 1963 March on Washington and Martin Luther King, Jr.'s iconic 'I Have a Dream' speech. But corporate media's King says more about their own self-image and desire for 'post-racialism' than about...

I do as well, but don’t let that angst get you delving into false equivalency either.
They are different.

Just speaking up to defend Booker T. Washington, and not meaning to address your main points.

I recently read his book Up From Slavery. The introduction said that during the entire time that Booker T. Washington was using the language of “accommodationism” to allay white fears and cozen money from wealthy whites who were terrified of other black leaders (like W.E.B. du Bois) he was secretly funding those same more controversial leaders and directly intervening monetarily in various causes and cases related to racial equality. It said that very long after his death, it became apparent from historical records that Washington played both the white establishment and his black followers for nearly his entire life, saying whatever he had to in order to build the Tuskegee Machine and provide the maximum benefit not only for the descendants of American slaves, but for the entire human race. He willingly allowed himself to be seen as the puppet of racial supremacists and an “Uncle Tom”, and gave up the respect of people that he himself admired, for what he believed was a righteous cause.

One hell of a man in any case, who did nearly incalculable good that endures to this day. But take any claims that he was truly callous towards the suffering inflicted on disenfranchised Americans by racists with a large grain of salt; he needed to portray that image to get his life’s work done, but he apparently also did whatever he could for true racial equality behind the scenes.

Tangentially related: I quite enjoyed Sarah Vowell’s 2001 essay about how so many people love to compare themselves to Rosa Parks, which ends thusly:

In defense of Ted Nugent, the street performer, the mayor, the dairy farmer, the lap dancers, the Naderites and a fictional sportscaster, I will point out that Katherine Harris is the only person on my list of people lamely compared to a civil rights icon who is actually being sued for “massive voter disenfranchisement of people of color during the presidential election” by the NAACP.