On-duty NYPD officers admit handcuffing teenage girl, putting her in van, and having sex with her, but say it wasn't rape

Some pigs, I mean animals, are more special.

“They said that it’s supposed to be in the bottle but they just gave it back to me.”

Fuck that, I can’t carry the pills I take around in the original bottles. Thats why they make pill cases.

Their duty should be modified to incarceration pending trial.

I mean, let’s just say for one minute, she was into it. Wanted to maybe do a little trading to get out of trouble. Let’s just say that is true. What is wrong with your moral compass - AS A COP - that you would have sex with a teenage (presumably underage) girl?

But likely this wasn’t consensual so this goes to 11 on the “WTF?!” meter.

the girl happily consented to having sex with them

I cannot believe (read: I don’t want to believe) that there is a legal definition of consent in these circumstances. It really doesn’t matter, morally, whether the girl truly, truly in her heart* consented to these acts. Police officers should be legally obligated to not have sex on duty. Honestly, off duty is even problematic given the amount of power they wield over civilian life, and should probably include other consent-related legal safeguards. Of course Priests have near immunity when raping children, and cops have near immunity in taking lives on the street, so we’re a long way from sanity…

*not saying there is any way that this is true,

Edit: to @GulliverFoyle’s point, let me just clarify. My only argument here is that if any phase of trying or sentencing of this case hinges on trying to determine whether or to what degree this victim of brutal, state sponsored rape “consented” then we are already fucked beyond belief

Officer Funny, this isn’t your pension. This is her pension.

But likely this wasn’t consensual

When the state has the sole authority to violence, there can be no consent in such circumstance.

It’s not a matter of likely so much as one of definitionally.

Michael Palladino, the president of the Detectives’ Endowment Association, declined to comment on the probe. “The investigation is ongoing and the information is changing hourly,” he said.

He means their story, not the information.

yo…Alan…wanna help a brother out?

Don’t worry. The cops will be fine

I’ll give them a “modified duty.”

This incident is rage inducing.

I wonder if either of these gentlemen are married and if so, what do their spouses think of the charges?

Don’t worry. The cops will be fine

lets go with ‘okay’. I don’t even see fines in their future. 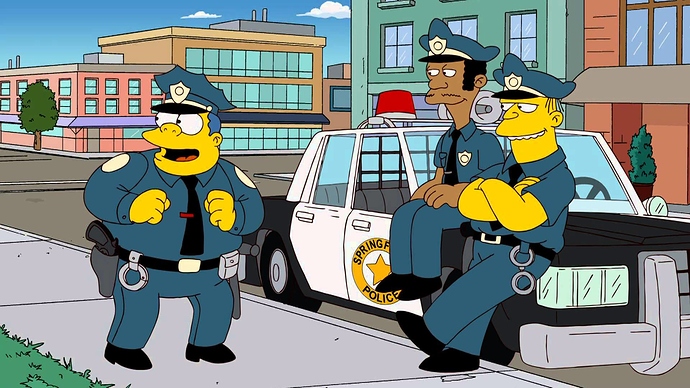