No matter what the issues were with the Queen Mary, It was all worth it, since the music video for “Anna” by Will Butler was shot there

No matter what the issues were with the Queen Mary, It was all worth it

I appreciated the appearance in the final episode of Arrested Development. (well, final before Netflix resurrected it, anyway.)

I remember seeing this when I was a kid in the late 80’s on a family vacation. I didn’t understand the importance of it and it seemed pretty shabby and worn out then, I can’t imagine what another 30 some years of mismanagement would do. I’m trying to remember I think the Spruce Goose (old timey amphibious plane) wasn’t far away and some kind of street market was in the area too? I don’t know I was a little kid and old boats and planes weren’t really my thing.

There are some interesting histories of how the whole thing failed, failed, and failed again. I think the most likely to have preserved the ship use would have been Disney, but they have also outright abandoned shit they don’t want to deal with (whole islands, etc) too.

I grew up in the 1970s and 80s LA. The QM was a cut-rate attraction that already seemed doomed. A number of friends have worked on the Haunted Halloween show there over the years and no one really has wonderful memories.

It’s probably not feasible with something this size but I’ve always wondered about big old boats being hauled up onto land and being set into concrete foundations to serve as standard buildings.

Tourist trap has always been and continues to be a shabby mess. Highlights at 11.

Turn it into razor blades.

I ran into this thing when traveling for work, and was surprised to find that it wasn’t a scrapped old cruise ship reassembled for use as a hotel. It looks pretty convincing even up close. But apparently it’s still cheaper to build a building to look like a ship than it is to repurpose an old ship. 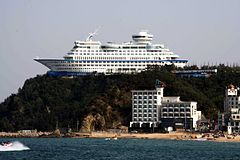 Sun Cruise Resort & Yacht is a hotel resort in Jeongdongjin on the east coast of South Korea. Designed in the image of a cruise ship, notably the Royal Caribbean International Sovereign Class, the hotel is 165 metres (541 ft) long and 45 metres (148 ft) tall and overlooks the beach resort. It is believed to be the first of its kind in the world. Built at the top of a large cliff, the hotel looks out over the sea and gives the impression that a cruise ship has run aground. The hotel has 211 room...

It would make a great reef somewhere. 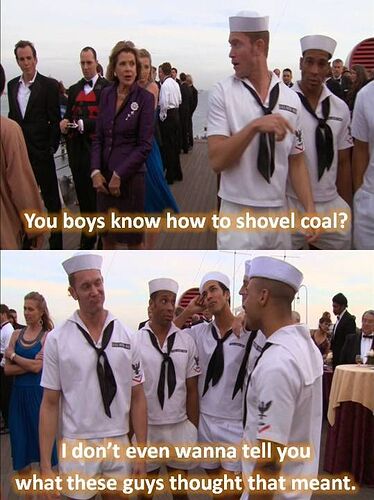 But apparently it’s still cheaper to build a building to look like a ship than it is to repurpose an old ship.

I guess that explains why Disney didn’t simply repurpose a decommissioned galactic cruiser for their new Star Wars hotel.

I know being on the QM brought me to tears… but that had more to do with the diesel and bunker fuel exhaust from the Port of Long Beach. But that was “back in the day.” Maybe it’s better now.

Really the only way to do these things without the major ongoing sea-related costs is to sail them into a ditch, close off the ditch, then carefully drain and backfill.

I’ve always been fascinated with the repurposed ships of San Francisco. Never been but for sure on my list of things to check out when/if I ever make it down there.

I was also captivated by the history of underground downtown Seattle - what you see today at street level on most old buildings is actually their original 2nd floors with newer entrances.

Why is San Francisco's Foundation is Built on Old Ships from the Mid-1800s?.

Really the only way to do these things without the major ongoing sea-related costs is to sail them into a ditch, close off the ditch, then carefully drain and backfill.

And if that was easy, they’d do that for most museum ships. The fact that they usually don’t makes me think that is difficult.

Whether or not is ‘fun to visit’ is matter opinion. I took family, we did the tour which was interesting in itself and the Magic Show was fun.

However, my Dad served on that ship while in Merchant Navy and so it was extra cool.

I went on a tour of the USS Hornet permanently moored in Alameda (CV-12). It is a WW2 era aircraft carrier which was the ship that picked up the crew from the first moonwalk in 1969. I asked the docents if it was possible that it would ever move under its own power again and was told that essentially none of its running gear is in any kind of working order, it consumes a TON of fuel, and they’re not sure how they could be sure it’s seaworthy, even to go out for a cruise in the bay.They summed it up by saying it’s permanently moored.

Outside of the smell of stale diesel fuel and gear oil, nice tour if you can, and if you’re into that sort of thing.

They’ve done it in Wisconsin so it can’t be that hard.

I ran into this thing when traveling for work, and was surprised to find that it wasn’t a scrapped old cruise ship reassembled for use as a hotel.

And then there is the Marina Sands Skypark in Singapore, where you know it is not a repurposed boat but you can’t figure out how this design got there from Burning Man. 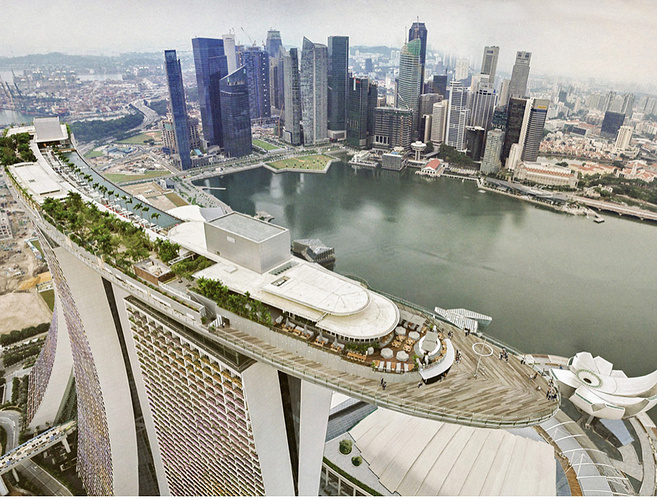