I just want to point out that in a very superficial survey of the first page of the tumblr these come from - the dogs all seem to love him, and the cats all look really uncomfortable with him touching them… I’m not making any kind of judgement from that… just noting it. Perhaps it will prove historically significant one day? 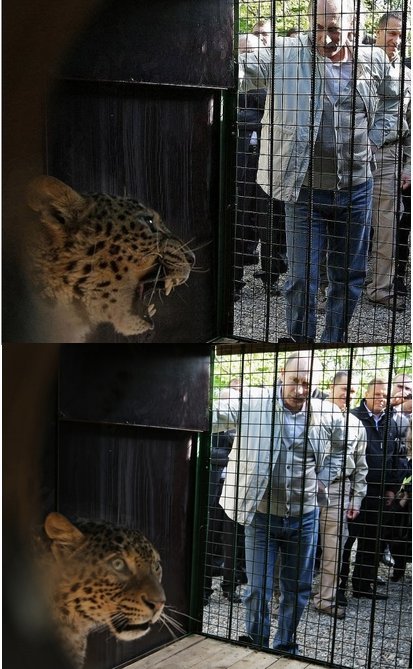 It’s the only love he feels.

I like my Vladimir stripped to the waist and wrestling a bear.

Given the politicians that the West is chummy with, it’s hard to understand why Vladimir Vladimirovitch gets such a bad press. Is he really any worse than the average Middle Eastern dictator? Are the publicity pictures of him really worse than the ones that a lot of Western politicians go in for, such as our own beloved Prime Minister and his Arctic jaunt some years back?

I think there may be a bit of a double standard here, and just because Putin undid the pro-Western corruption under Yeltsin and replaced it with pro-Russian corruption.

It always creeps me out to see pictures of heinous people (not limited to Vlad here) appearing almost human. On the one hand they are responsible for so much pain in the world, and on the other hand…puppies.

That fuzzy puppy got big in 3 years! (The 2nd to last picture appears to be the same dog)

I think that it operates on several levels. There is definitely the “Guy’s a damn snake; and he refuses to be our snake!” effect. With a few outliers in the Mother Jones range of influence, the media will certainly treat your assorted quirks and human rights violations much more kindly if you are one of our Freedom Buddies; which Putin very much isn’t, while the House of Saud very much is.

I suspect that there is also some bitterness and disappointment that he serves as a good focus for: depending on your level of cynicism, Russia used to show real promise for becoming substantially more free and democratic and/or becoming a much more convenient and profitable playground for western corporations; but these days, not so much. I don’t know exactly the breakdown(in terms of influence) of what drives the media coverage; but neither the sincere optimists nor the cynical emerging-market-extraction-artists have much to love about him. Economic nationalism is certainly enough to get you rubbished in the American press; but he has certainly shown journalists, dissidents, homosexuals, etc. at home and abroad that this isn’t just about standing up to Exxon-Mobile’s attempt to strip mine the country.

Plus, of course, there is a rich stock of ready-to-reheat cold war era fear(justified and paranoid, and available in mixtures, to taste) of The Ruskies. Putin doesn’t seem to be a ‘fire the missiles and tank-rush Western Europe’ kind of guy; but he certainly rattles the saber(and sometimes uses it, where a former soviet republic seems like it might be amenable to rejoining the mothership) enough to make that stock of imagery evocative enough to run.

He’s obviously not a cat person. 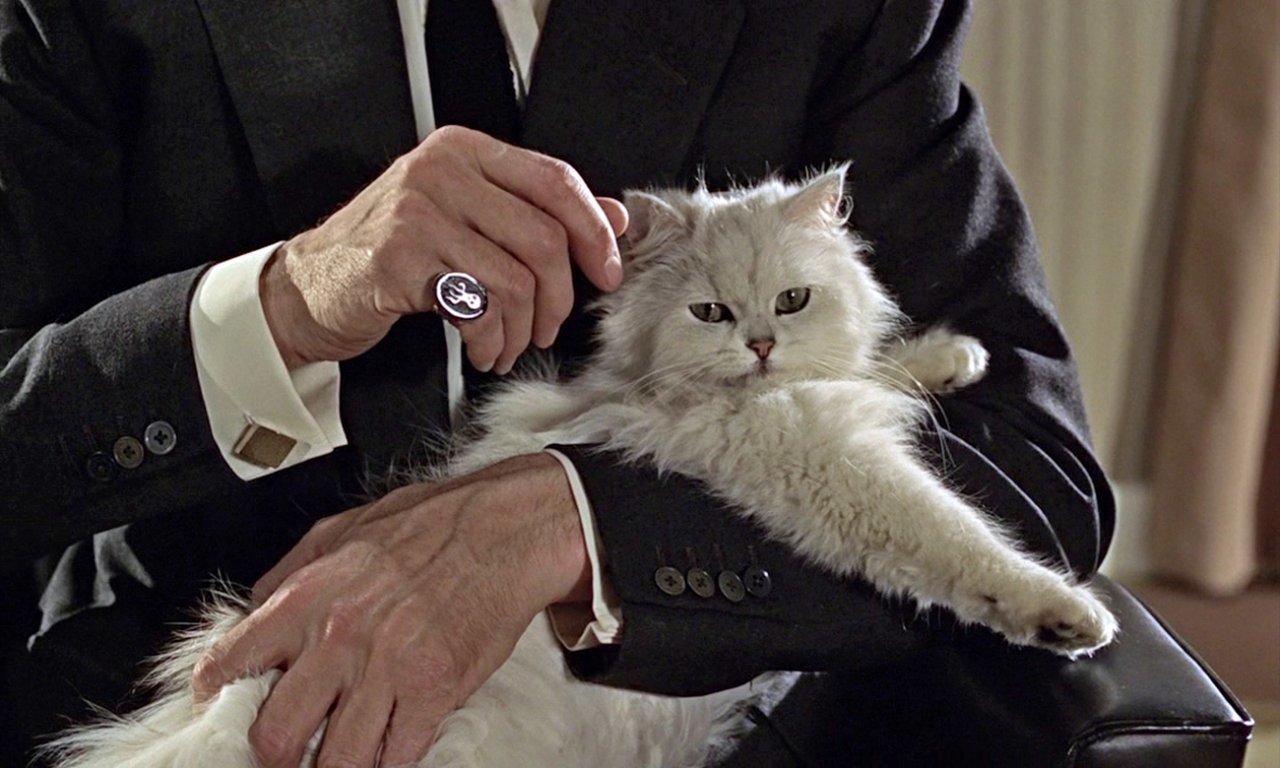 Even Putin-Hitler has a few good days, apparently…

You pose with animals when you cannot get humans to do it. Wouldn’t be the first.

while the House of Saud very much is.

I can’t help thinking that ISIS/ISIL is the result of NATO failures in dealing with régimes not only like the Saudis (and their encouragement of Wahabism) but also the failure to support the Kurds adequately and defend them from the Turks, the flip-flopping on Hussein and Qaddhafi, the promotion of Karzai, and in fact the continuous failure in the State Department and the CIA to recognise that foreigners who say “Your US is wonderful! We want freedom and democracy! How about some cheap planes and artillery?” may not in fact be friendly towards the West at all.

Putin goes along to to NATO and the West and says “Keep out of our territory, stop trying to encroach on our borders, stop trying to take over our economy and we’ll work with you on terrorism”, and he’s seen as the weasel. But actually I can’t help thinking that in his position any US president would have been doing exactly the same. It’s the inability to recognise itself in a mirror that is the central problem for our policy. (I except Kerry; I have enormous regard for the work he has done with Iran. Best President the US never had?)

As a Lithuanian, a “victim” of “NATO encroachment” since 2004, I say bullshit. The narrative of NATO expansion and Russian reaction tends to ignore that the countries where NATO is expanding have, over the past decades and centuries, come to realise they want to have little to do with Russia and are eagerly seeking better alternatives.

Neutrality is not really an option - not in this part of the world. Belarus passes as a neutral ground for the sake of Ukrainian peace negotiations between Western and Russian leaders, so you need to look at it to understand Russia’s idea of neutrality: kissing a lot of Putin’s ass and occasionally nodding towards the West. Anybody who points out that Putin’s ass actually stinks is obviously a CIA-trained American agent (and probably a gay jewish nazi too).

If anything, the narrative of the past few years has been one of Russian militarization and (mild, belated) NATO response. Obviously, security from Russia was the major reason why Lithuania and the other Baltic countries joined NATO, but Russia wasn’t on NATO leadership’s mind. The Baltic armed forces remained rudimentary. NATO leadership recommended training specialists who could be sent on foreign missions - Afghanistan, Iraq, etc - instead of building conventional forces that would be useful closer to home. The only persistent NATO presence in the region has been the air police mission - 4 fighter planes to act as the air force for the three countries that have none of their own. (The number was bumped to 16 after Crimean annexation, now reduced to 8.) Only this year did any plans get made for deployment of NATO ground troops and equipment in the Baltics - though again, only in symbolic numbers.

Look at this timeline of US-Russian relations under Obama. It starts out with the “Reset”, the cancellation of the missile defence system in Eastern Europe, Obama’s visit to Russia - all actions directed at strengthening diplomatic ties and loosening tension. To this Russia responds by staging massive military exercises simulating a war with NATO, including a first-strike nuclear attack against Poland. Putin’s aggression does not come from a lack of diplomatic options, but because he knows it won’t be answered in kind.

As a Lithuanian, a “victim” of “NATO encroachment” since 2004, I say bullshit.

The point I was making wasn’t that Putin/Russia is any better than anybody else, but that really they are not any worse. I know it sucks badly to be a small country on a regional border. But I don’t think the situation of Lithuania is objectively worse than that of Cuba (until very recently). Puerto Rico is now being brought to its knees by US hedge funds without US government intervention. If you think that the average Cuban envies US freedom, wealth and democracy they might, but if they knew about the Caribbean they would also surely know that they would be more likely to be a shithole like Jamaica, the Dominican Republic or Haiti if they were in the US sphere of influence (and the Puerto Rican example shows that even if you were better than the rest of the Caribbean at one point, a US banker may even now be preparing to shaft you).
Then there are the unfortunate countries in the Middle East - Lebanon, Syria, Afghanistan, Yemen, the Palestinians - who have found out what it is like to be involved in a conflict between Saudi and Iran, with the US supporting the Saudis.

Lithuania had the misfortune in WW2 to be treated to a comparatively benign Nazi régime, as a result of which it was regarded by exceptional suspicion by the USSR. Your history isn’t your fault (if it was I would be in deep shit as a result of the historical burden of my own country) but the situation is what it is, and I think that the West is as much to blame for the present state of affairs as Russia. That’s my only point.

Fair enough. I was not responding to your earlier point that Putin is not the worst, but to this description in particular:

Putin goes along to to NATO and the West and says “Keep out of our territory, stop trying to encroach on our borders, stop trying to take over our economy and we’ll work with you on terrorism”, and he’s seen as the weasel.

To which my points are that the word “encroach” implies a wrong and problematic narrative, and that Putin does not actually want “work with” the West at all. Putin sees the Cold War as the good old times when Russia was regarded with fear and respect, and had the power to dictate matters on a global scale. China would fit your description better - it’s a superpower that largely minds its own business, doesn’t get involved in international conflicts beyond the immediate neighbourhood and prefers to maintain a working relationship with the West. Putin wants a conflict, as long as it allows him to pretend he’s as important as the US.

OK, I’m not going to argue with your assessment. Though I have to say that China’s acquisition of land in Africa, South America and elsewhere is profoundly worrying; it is practising soft colonialism, possibly to ensure food supplies for China when global warming really kicks in.