Over six percent of us experience "phantom odor perception"

I get this all the time.

On the migraine side, I don’t get warning odors, but if I smell artificial grape it triggers a migraine instantly.

Worst thing is that smell is everywhere.

While my image above was a joke, every once in awhile I will smell decay that I can’t track down. So then I think it’s in my head, possibly literally. But it goes away, which if my head were rotting would not likely be the case. Surely.

It’s weird, and I don’t like it, but since I’m a working-class American I can’t afford to just traipse over to the doctor to see what might be wrong.

Either it’s nothing, and I wasted the money on the copay, or it’s something and I’m looking at who knows how much expense that I can’t afford.

So I cross my fingers, hope it’s nothing, and remind myself that we are all going to die at some point anyway.

Relax; you’re just smelling the sulfur and brimstone wafting from the infernal gates that await you in the afterlife. I get that all the time.

I get the 72 hour attack phase. I had to explain to my boss that actually, no, three days isn’t that abnormal for even just one stage, let alone a full run.

Mine are pretty reliably six hours, not counting aura. But as long as I’m awake in the aura phase, completely controllable with sumatriptan. If I’m asleep, things get really awful.

I am jealous of people who get pure visual migraines. They are like “dammit that pretty thingy is interfering with my vision” and I’m going “shut up, do you realize I’d be delighted to have your condition? I’d pay money!”

And if you check off olfactory hallucinations they’re likely to say “Temporal lobe epilepsy”.

Brain scans of people undergoing migraine are astonishingly similar to those of epileptics having seizures, and there’s other commonalities, too.

For example people with severe painful migraine and people with anything but the mildest forms of epilepsy live similar lives; the condition impacts all activities and is necessarily central to all planning and considerations. Your family, friends and employers all have to know; and you have to secure your sources and supplies of medication. Occasionally cops and venue security guards will try to confiscate your meds (thinking they can sell them or get high with them) and you should have a plan for that too.

For many years, this was a really reliable way of knowing that I was going to get a migraine: I’d smell burning garbage, gasoline, or tobacco.

Nope, you’re not alone. My neurologist says she has patients with this aura symptom, but until she mentioned it I’d never heard of it before.

On the migraine side, I don’t get warning odors, but if I smell artificial grape it triggers a migraine instantly.

Stay far away from kudzu! In flower, it smells exactly like artificial grape. Well, to me anyway.

@LDoBe, @Pensketch, note @knoxblox’s comment above, and consider getting checked for nasal polyps. Much easier to treat if detected early, I think?

I get that all the time.

This could also be (perhaps atypical) epilepsy, you know?

You should get that checked as well.

I’m on sumatriptan right now, and that’s not a joke.

It's Anfertupe and it's delicious.

If you had a nickel, and I had an octopus, we could start a revolution.

Hang in there brother.

Same old, same old… what really irritates me is that it’s just a colossal waste of time with little to none educational or entertainment value.

@frauenfelder and his clickbait headlines.

Oh come on… he isn’t half as good at it as @doctorow is.

nope… turns out my dog did really roll around in her own shit this afternoon.

“It’s coming from inside your nose!”

This started happening to me in the last couple years. Sometimes I smell cigarette smoke, sometimes it’s perfume. Coincidently (or not, from what I read in the comment thread) I have also started getting silent migraines. The most recent one was the worst yet, acute for about 36 hours and dragging on in decreasing severity for another 2 1/2 days. And I did smell cigarette smoke the evening before it started. I didn’t connect the two until reading this comment thread, so thanks for that!

I have no clue as to what triggers these silent migraines. Yes, it’s “better” than than the old pain-driven ones I used to get before I figured out my trigger (aspartame), but every other goody that went along the pain are present in these silent ones, and ye gods, 4 days of it.

Also, a question: does anyone else have GI symptoms with their migraines? This most recent one seemed to shut down my entire GI tract for the duration of the event.

From a mid-1950s Berton Roueche New Yorker article, reprinted in The Incurable Wound: 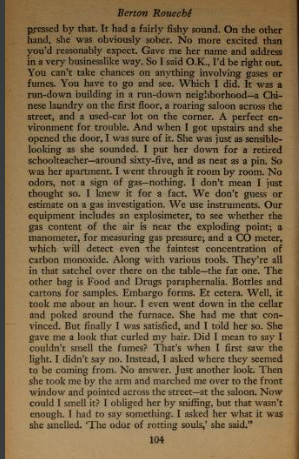 Being hit over the head with a slice of lemon wrapped round a large gold brick.

Remember Powell & Pressburger’s “A Matter of Life and Death” (1946) where the smell of onions meant that conductor 71 was about to appear? And the doctor asks whether he has sensed any phantom smells?

I get the smell of burnt styrofoam once a month or so. Started in my early 30s I think and has continued the past decade. Happened before and since chemo/radiation treatment (2 years ago).

I can never be sure if I am hallucinating smells or just more sensitive (which can aggravate the nausea), but my tactile sensitivity ramps up to 11, so it could be either wa

I get ridiculously sensitive to smells with my migraines but thankfully not very light sensitive. I’m mostly only bothered by blinking lights or anything moving around too fast in my field of vision.

I definitely get vomiting if I don’t take my pills early enough. But if I do take Imitrex the migraine hang over phase gets reduced to same day instead of the whole next day. And I only have to deal with the actual migraine for about an hour, instead of most of the day or more.

My pre migraine is usually short although if it happens at night I get crazy, frustrating dreams. Sometimes I have a migraine in the dream itself but if not they are about solving horrible, impossible problems.