1 Like
Prison Profiteers: extracting billions by exploiting prisoners and their families
bbfreak 3 October 2013 15:06 #2

I’m sorry, but there is absolutely NO way the GOP can be defended, and nobody should believe this BS that they’re just as outraged as anyone else. They shutdown the government, and are threatening to not let the US government pay its debts. There are many issues where both parties are certainly at fault, but this isn’t one of them. Its the House’s job to fund the government, and pay our debts. Its one of the simplistic, non-partisan activities they do. Yet, they can’t even do that without dragging their unreasonable demands into it.

Look, I don’t love the Democrats but at least they aren’t trying to burn down the government for political gain. Ideally we’d have a third party, or even better we’d have a Republican party that wasn’t batshit insane. Nope. Then they say Obama/the Senate aren’t compromising/negotiating when they aren’t doing anything of the sort. You don’t compromise/negotiate by saying “give me what I want, or I’ll do this to the government”. That is plain extortion.

Cock and Boner - it can’t be wrong.

A bit off topic, but I also know of a person named “Koch” who pronounces it “Cook”.

I always read it in my mind like it rhymes with “crotch” so I think “Cock” is also probably appropriate.

I don’t get it. The War Monuments in Washington are open air and usually open 24/7 without supervision other than park-police patrols that are considered essential posts anyway. If the money runs out, the way to not spend money in relation to the WWII memorial is to do nothing, not to rent barricades and call park police away from their normal duties to man them.
I’m finding the same thing with research on laws – FedGov websites have been intentionally redirected to “we are closed” pages. It would have been less bother to leave data archives running.

Judging by the moral logic he displays here, Neugebauer is apparently one of those guys who expects his wife to apologize every time he smacks her around.

They’re blaming President Obama for their shutdown for the same reason they blame Democrats for the war in Iran, Barney Frank for the housing crisis, and Nancy Pelosi for the recession: the Right, honest-to-God, has absolutely no concept of responsibility.
It’s just a word to them. They talk about “responsibility” a lot, but it’s always someone else’s.

But… but…he was carrying an American flag! What’s wrong with you people? That signifies that he is a true American. Isn’t that enough for you people? What now? You expect politicians to do work instead of posturing?

I know you’re supposed to pronounce Koch like Coke

no, Koch is pronounced like Loch, but only a true Scotsman can appreciate that.

Yeah, at first I was questioning his integrity myself but then I saw that rather large flag sticking out of his pocket and I felt ashamed for doubting him. Flags. Yeah, that’s what America needs, more flags.

White hot seething rage. And not one of these contemptible liars (such as occasional BB love interest Rand Paul) well ever be held to account for just making shit up to distract from their own insanity and incompetence.

WWII Veterans Group: Park Service ‘Bent Over Backwards’ For Us

I’ll bet the park rangers shut down those cancer trials, too.

I appreciate this new method of referring to congressmen by their sponsors.

understand that the GOP is to blame

You’re bias is showing. Both parties are equally to blame. The are both refusing to cooperate in getting a budget passed (for years now), or even a continuing resolution. You may agree with the Dem’s reasons for refusing to cooperate, but that doesn’t mean they don’t have a choice in the matter.

The are both refusing to cooperate in getting a budget passed (for years now), or even a continuing resolution.

The Democrats have already compromised. They compromised severely on the ACA when it was passed. It’s disingenuous to claim that they’re not compromising because the GOP is now demanding that what the Democrats have already given them isn’t enough. Compromise and cooperation requires both parties. It’s not compromise to say “Compromise is half-way between what you’ve already given us and what we want.”. Cooperation isn’t saying “We were soundly defeated in the Presidential election. We were soundly defeated in the Senate and lost control of it. We lost half our majority in the House. But you’re not cooperating if you don’t give us 100% of everything we want in the budget.”.

Bear in mind that right now the House has the votes to pass the Senate’s budget proposal and get the government running. They have enough votes by a good margin. The only reason it’s not being passed is that Mr. Boehner won’t allow the House to vote on the proposal. So, why doesn’t he allow it to come to the floor for a vote?

Please. Republicans have spent the last 5 years engaging in every obstructionist tactic they could find to prevent any legislative initiatives by the Democrats.

The Republican long-term strategy has been described as “starve the beast”. This is exactly what they’ve been gunning for for decades now. Now they got what they’ve been asking for and all of a sudden they don’t want to take “credit” for it. Color me surprised.

Really ??? The House passed a “clean” budget in MARCH. Look it up, HConRes 25. Passed by both Republicans AND Democrats. 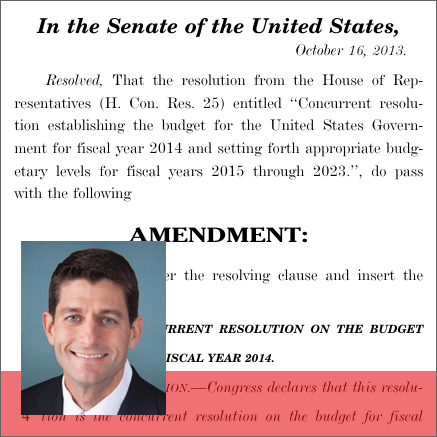 Establishing the budget for the United States Government for fiscal year 2014...

A resolution in the U.S. Congress.

Senator Reid never even let it come to a vote.

I realize I’m going up against the HiveMind, but facts count. This entire debacle is purely the Senate’s fault, and Harry Reid runs the Senate. . . .

Really ??? The House passed a “clean” budget in MARCH. Look it up, HConRes 25. Passed by both Republicans AND Democrats.

Both? Yeah, right. The GOP passed their own ideal budget, with 0 Democrats voting for it and in fact 10 GOP members voting against it. Such a compromise there. The GOP knew their budget was dead on arrival in the Senate, they went ahead with it, and now they’re holding the government hostage unless the Senate gives them everything they want.