What? It’s clearly white and gold!

I see it too. If I wiggle my phone, it’s more apparent. I suspect it’s part of the same class of illusion that causes pictures of craters on the moon to interconvert to mountains and back if the pictures are framed a certain way.

Well they’re obviously photos of something 3d. You mean even 3d-er? Like some kind of fractal 3.3 dimensional?

Do they wear glasses? Could it be chromatic aberration?

Lower left sorta could look 3dish to me, but none of them are jumping off the page at me.

Do they wear glasses? Could it be chromatic aberration?

Came here to offer the same suggestion. I have a super high scrip, and very blue (or red) light will visibly displace relative to the actual object. I was looking at a red lego and blue lego sandwiched together, and it actually looked like there was a thin black lego between them.

Sadly, today I am wearing contacts, so I can’t test this.

Might be related to the vibrating effect when deep blue and bright red bump up against each other. Something about colors that are on the edges of our perceptual ability?

They are 3D, goddamnit. As 3D as my toothpaste. You said it yourself ‘piles’ of blue… well, it’s pigment or I’m an asshole. The operant word being ‘piles.’

I don’t see it, so I dunno. Um… I know boundaries between primary colors can look weird on some monitors, especially low-res LCDs, because of the fact that the red, green and blue elements within a pixel are at different locations, so pure red next to pure blue looks like it has a displaced line of magenta pixels in between?

That happens in print too, it’s not about sub-pixel arrangement.

Try some of this white powder the blue is AMAZING then.

I don’t see it either, there’s nothing special about these photos to me.

It’s annoying as hell, isn’t it? Here, at least this one fools my eyes, maybe it’ll work for you too: 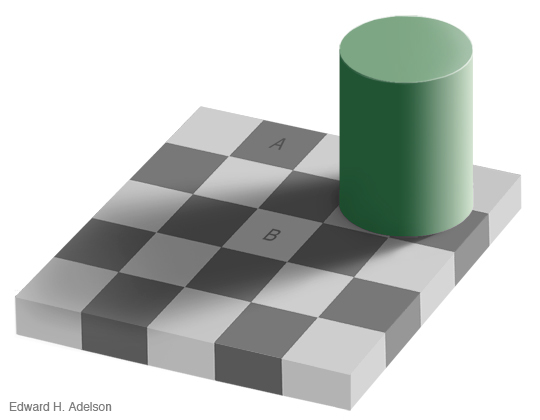 Squares A & B are the same color.

I know the effect, but none of these are quite the right shade of blue for me.

Browsing thru Netflix last week, I passed by the Jeff Foxworthy and Larry the Cable Guy “We’ve Been Thinking” show - the splash screen, which is the two of them on stage against a blue-lit background, was so three dimensional on my 47" Samsung that I actually had to get out of my chair and tentatively poke the screen with my finger. Even up close, it looked genuinely 3D. Like a Viewmaster - the blue background looked to be a full eight or nine inches into the TV screen. I’d never seen the effect quite that pronounced. It also works on my iMac monitor, but not as well - I think the smaller size reduces the apparent depth. The color rendering on the larger Samsung display made it look quite striking, though, even if I had to stare at Jeff and Larry to appreciate it.

I usually wear contacts, but today I’m wearing glasses (strong bifocals). The red/blue effect you’re describing is called stereopsis, and I notice it when I’m wearing glasses or contacts. There might be some of that going on here, but I’ve also noticed a little of the wiggle effect that a few others have pointed out. It’s similar to wiggle stereoscopy. If I look at the blue powder head-on, it doesn’t really look 3D, but if I’m moving my head while looking at it, it looks 3D. I notice this effect a little more with my glasses on because of the distortion in the lenses, and because I can’t really see the details in the image with my glasses off.

i always thought i just had trouble focusing on blue things, especially blue luminous signs. there used to be an @walmart labs building on hwy 101 with a blue sign, and driving past it at night, i could hardly read it.

It’s due to the human brains’ instinctive understanding of relativistic physics. The images appear unnaturally blue; therefore their spectrum must have become blue shifted. As a result you feel that they are speeding towards you at near-light speed, and can’t help but twitch.