That the movie features a large number of automotive fatalities (that is, autos that die) is disturbing for a movie aimed at the age-bracket it is aimed at. I enjoy all the spy trappings, though.

Hard to disagree much with their order, honestly. I mean, the fact that Cars 2 is arguably better than 95% of movies anyway means that this is totally the rich complaining about how dirty their money is, but if you’re going to get a list goin’, I suppose this is a list I agree with more than not (though I think Brave is ranked too low!)

Cars 2 is just a little heavy on the national stereotypes, no?

Heh. I was just going to point out that Planes 2 was just as stereotype-y… He’s big into that, as well.

Brave Old Worlds: Does Pixar Have a Problem with Stereotypes?

What is it about the animation studio's confusing attitude towards cultural stereotypes?

And let’s not forget The Incredibles’ endorsement of objectivism. 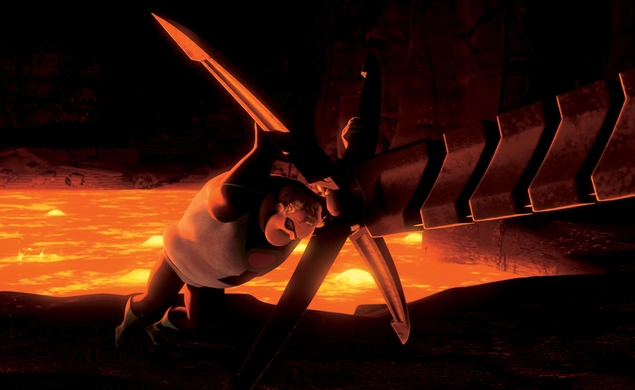 The slippery politics of The Incredibles and other superheroes

The Incredibles has attracted plenty of political analysis. But trying to apply a coherent political viewpoint to the film, or any ...

WALL-E - so great! Went to see some other movie and it was full or something, and the lady at the desk so enthusiastically suggested we see WALL-E, which was not on our radar screen, that we went. So glad we did. Love WALL-E!

But Toy Story always has a place in my heart for being the first full length digital movie and still so fabulous.

I first kissed my now-wife while watching a videotape of Toy Story.

That it gets called objectivism seems a little strange to me. There is the very explicit message that “when everyone is special, noone is” in a word that marginalizes those who are truly great. But it only presents profit and invention with distaste; the heroes are all altruists who feel compelled to help others.

Plus I assume true objectivists would not like the climax, where the crisis is resolved in dramatic fashion without a single hour-long speech.

Ranking the Pixar films from worst to first is akin to ranking the best meals from the finest restaurants in the world. Even the “last” place is way better than anything else you are going to get anywhere.else.

I loved Cars 2. I shouldn’t have for every reason…but it was fun and entertaining and enjoyable.

I might put Ratatouille higher though if only for my love of cooking.

I have a different problem with Brave… it wasn’t the movie they advertised. I walked into that theatre expecting to see an Lindgren-esque action-adventure, and got an entirely different genre. It was a good movie, but I did feel very bait-and-switched.
It’s like going to a steak house, to get steak, and it turning out that they grind up steak to use in spaghetti sauce. It’s may well be very good spaghetti, but…

And let’s not forget The Incredibles’ endorsement of objectivism.

I think the word “endorsement” is too strong, if not entirely baseless. When an artist has people on the right and the left complaining, chances are the artist’s personal philosophies are somewhere in between.

No, Tomorrowland and The Incredibles Are Not Inspired by Ayn Rand

It’s happened again. Brad Bird has released a new movie, and critics have declared that it harbors the messages of Ayn Rand. In the New York Times, A.O ...

Yeah, I wasn’t being entirely fair there.

I think I read that article about Tomorrowland - someone lined it here before?

But I definitely don’t like the stereotypes in Cars 2 (or Planes).

I have a different problem with Brave… it wasn’t the movie they advertised.

I’d really love to see the movie that Brave would have been had Pixar let Brenda Chapman finish the movie she started. I strongly suspect all the dumb stuff came when Mark Andrews was brought on board to co-direct. It’s a Frankenstein movie in which you can practically see the stitching seams.

I’ve always considered Up quite the cinematic feat. Lots of people complain about the “sad” opening. What they seem to overlook is that when Carl reads all of Ellie’s scrapbook near the end you’re supposed to realize that the opening montage is only sad through Carl’s (and our own) lens. Ellie loved her life, and had no regrets at the end. The feat is that you never quite see the “sad” opening montage the same way again after watching to the end of the movie.

I was going to reply in much the same way. I’ve watched it many times, and I often wonder how the movie would have gone if one of the other versions was chosen. However, I do invite anyone who’s only seen it once to watch it another dozen times. I find myself being a bit more forgiving after re-watching it enough. It’s also possible that I like it more because my daughter likes it so much…

I always assumed The Incredibles was heavily influenced by Watchmen.

Pretty good list. They’re right about UP: The parts about Carl and Ellie and Carl’s grief are so poignant and novel for a kids animated movie that they make it easy to overlook the pretty silly and standard action-packed 3rd part. The supervillain with robotic dogs bit felt superfluous to me. They landed a house in a jungle; did they really need a supervillain as a challenge?

Finding Nemo is always going to be my number one. There is nothing I don’t like about it. I’m always delighted after watching it, for many reasons. WALL-E’s close second though.

It was only on the third viewing of Up that that-all finally sunk in, and Up moved from maybe 5 on the ratings to 3. Maybe 2.

My sister was reluctant to show the movie to my aging parents “because it was so sad” but realized, after my father kicked the bucket, what the whole scrapbook addendum was about. She and my mom watched it before she moved back to her old house to start life on her own.

Toy Story 3 . . . I was utterly convinced, as the gang slid down toward the incinerator, that everything would turn to light, and SCENE CHANGE to a Christmas morning, when a bunch of new toys are unwrapped, and after the kids ran off they introduced themselves to each other. Familiar voices, similar mannerisms, just new bodies and a sense of having met each other before.

But the way that movie actually ended was both a surprise and utterly predictable. And perfect. Utterly, totally perfect, and the sheer beauty of it was the reason I was misting up, really.