Similarly, I’ve heard “what if we trash the economy with this social distancing and the outbreak doesn’t even turn out to be as bad as the doomsayers have been predicting?”

To belabor the obvious, that’s the whole goal.

Gee, I wonder why hospitals have an increased need for ventilators “all of a sudden.”

Nobody knows. We’re looking into it. Some really smart people. The smartest.

that would make sense… if the world hadn’t already been dealing with this for nearly five months now, and even with the impeached president’s own slow response, here in the us for three.

also. if long division was difficult. or, if someone forgot their casio wristwatch calculator at home.

We really didn’t. It killed 50 million people. More than twice the number of people killed in The Great War. 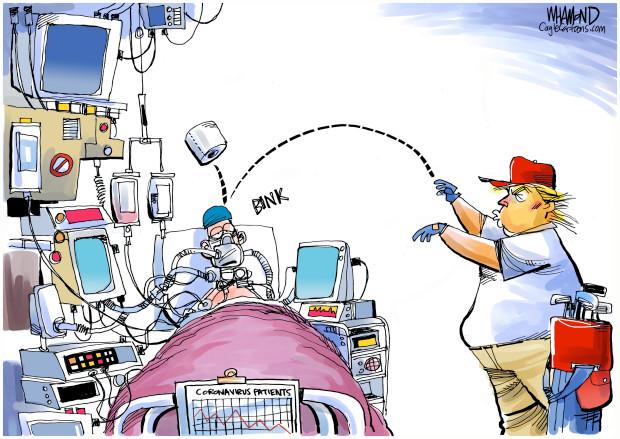 The decision to cancel the announcement, government officials say, came after the Federal Emergency Management Agency said it needed more time to assess whether the estimated cost was prohibitive.

The more I think about it, the more this sounds like one of those “We have to come up with a lame-ass excuse for Trump’s latest insanity.” Trump really DOES seem to believe that this will just “go away” because he thinks that is in his best interest.

Trump has always been about hurting people. Brown people, poor people, whatever. He’s got a hammer, he’s looking for nails.

Helping people, especially sick (weak) people, is really off brand for him.

Interesting that Mexico would now like one in place to keep Americans out of their country.

Ah - at last - his long-term, clever, real plan to get Mexico to pay for the wall comes to fruition.

That’s not accurate because the patient actually has a ventilator.

So Trump is attacking Cuomo by noting that New York has a “stockpile” of ventilators they aren’t even using right now.

Perhaps we can put this in terms American Conservatives can understand:

When Santa Anna was amassing his forces to reign in the Texas Revolution, acting commander of the Alamo Colonel James C. Neill repeatedly requested reinforcements and supplies from the provisional government because he felt the outpost was woefully unprepared to face the coming onslaught.

Funnily enough, was not a problem in World War 2, when production of a variety of goods were being pumped out for war production. This only seems to apply when it comes to saving lives in a way that “disrupts capitalist production”…

After WW2 ended, the Dumbening started; the intentional but covert combined effort between big business and big government, to make the masses as lazy, easily distracted and as ignorant as possible, because uneducated, complacent people are far easier to control and manipulate.

I firmly believe that, although until the last election, I had no idea just how successful the plot had been.

Because WWII we chose fast and good. Just like we should do now.

How did we mobilize during the 1918 flu pandemic

Wilson largely ignored the pandemic. He also caved to the generals and sent sick troops off to Europe to fight in the war. This was a major contributor in spreading the virus around the world. After it ended a huge effort was made to sweep the entire thing under the rug and pretend it never happened.

Why doesn’t he just order them and then refuse to pay the bill?

Because we’re paying for it, not him. So what does it matter?

Ouch! You know things are bad when even a harsh political cartoon is a vast understatement.

It’s a war but they forgot to mention it’s a class war.

Imagine a situation where every decision for Trump had been reduced to yes or no, and he had made the choice by flipping a coin. We would still probably be better off than what we have now. What does it mean that Trump infallibly manages to do the wrong thing in every situation?

Remember that a great many of his decisions are to undo acts of Obama’s.