Plasma lighters are TSA-approved and more environmentally friendly than butane

I can see it now, go camping…end up looking for a usb charger in order to light the campfire.

Use one of those Biolite generators … oh wait …

At least it’s better than to go to your car, and use your cigarette lighter port, to tap 9v with an adaptor to run a charging cable to charge your lighter, to, er, start a fire.

(Waits for the pennies to drop ;)) 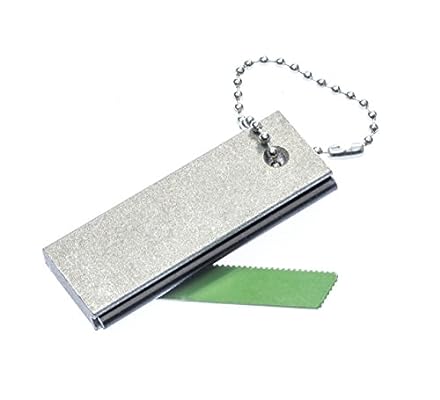 Why waste time and energy finding kindling with regular fire starters that may or may not even catch a spark?! Regular twigs and branches in their natural environments will not light unless they are e ...

Indeed so, never used to hike without one - though cutting magnesium shavings off as a kindling replacement is an ​interesting new wrinkle.

I do have memories of using emergency loo rollpaper tissue as emergency starting material on damp days.

(I also seem to recall some folks doing arcane things with steel wool and a PP3 battery, but I figured that I liked my eyebrows.)

Indeed so, never used to hike without one - though cutting magnesium shavings off as a kindling replacement is an ​interesting new wrinkle.

I have kept one of these on hand for emergency/bad weather fire starting since I was a TENDERFOOT.

Even the slow-mo of the classic striker shows how crazy magnesium is.

And yes, I learned a lot about incinerating things (accidentely and otherwise) from my time in Scouting, too. It seems good for that.

Let me take you back to the mid-’60s, when I was a 10-year-old living in a Pacific Northwest Boeing suburb.

I had a totally kickass chemistry set assembled over time from scavenging – the sort of thing a child wouldn’t be allowed in the same building with today.

My dad was a field rep with jet engine manufacturer Pratt & Whitney. He worked hard, was gone a lot and kind of distant, but one day he brought home something miraculous: a roughly 3’x3’ cardboard box filled with pure magnesium shavings, left from machining jet engine parts. That’s 27 cubic feet of highly flammable pyrotechnic joy.

You’ll just have to imagine the mischief, carnage and sheer wanton destruction I visited upon the streets and byways of our neighborhood. I would take a bucket of the stuff and use a wide-mouth funnel to deposit words and patterns on the asphalt; a single match would then ignite a spectacular display that would leave my scribblings deeply and permanently etched into the road. Pure bliss.

My dad had to know what was going on, but he never said a word. For a short time, I was truly as a god among the neighborhood kids. And more than a few Wham-o® Superballs, GI Joes and troll dolls (are you old enough to remember?) met their demise in a manner of which Vikings could only dream.

That’s why the smart camping monkey always brings a Samsung.

Did the TSA actually ban butane lighters? I thought that exemption was one of the most profound of their many absurdities.

You’d certainly think one of these plasma torches would do a heckuva lot more damage than a lot of other things that are TSA-banned. I suppose it’s only a matter of time before they figure out what they’re supposed to do.

(I bet those magnesium firestrikers looks pretty harmless to the typical TSA agent, too.)

True, but sodium can even start a fire with wet paper. (Magnesium tends to self-extinguish under such conditions because of the damping of the magnesium oxide. Sodium produces hydrogen from the water and ignites it. But nowadays I do not carry a little bottle of small sodium lumps under oil, for obvious reasons.)

If it just creates an arc, then its not much different from a piezoelectric gas lighter.

And more than a few Wham-o® Superballs, GI Joes and troll dolls (are you old enough to remember?) met their demise in a manner of which Vikings could only dream.

Now, there’s a great scene for Space Opera: Space Vikings incinerating their fallen comrades on a pyre made of magnesium shavings.

Magnesium burns like nothing else, except the aforementioned (and I’ve had a nasty titanium fire in my shop!)

This is what I’ve got in my kit. The one I’ve got seems to throw nice little gobs of molten burning metal. Delightful and burny!

Is the “more environmentally friendly” tag taking into account the environmental cost of the battery? Not being a smart-ass, but wondering about the math on that as I don’t see butane lighters as being big environmental polluters vs the manufacturing of a lithium-ion battery. But that’s a gut reaction. Would love to know the answer.