Poll: 54% of Republicans believe, “deep down,” Obama is a Muslim

“Where is the option for ‘Secret Muslim?’”

There are so many alternative spellings for those morans that I just don’t even bother.

In all fairness, I suspect more Republicans are right than Democrats.

But that’s probably just me projecting/hoping. 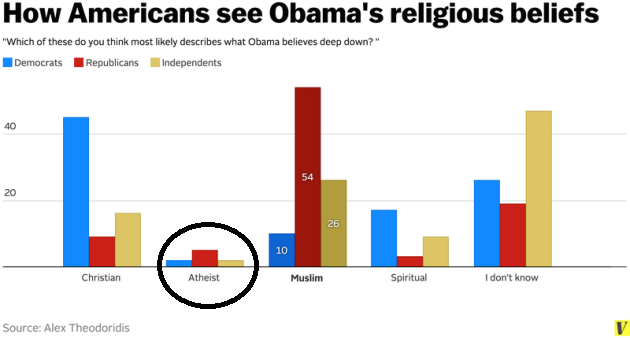 I wonder why there wasn’t a distinct option for ‘I don’t care’ as opposed to ‘I don’t know’.

the lede has been buried: 54% of Republicans think Obama has depth?

Some day we will have another president and this will be a non issue.
. . . this may be my last comment because I may not be able to afford the internet
after what I’m seeing on the news right now.

These are only proxies for general, personal feelings. Nothing more.

Or maybe most Republicans are just not that fucking bright.

I like the way the BB title is automatically trying to set up a poll on BBS. Or were we being invited to cast our own votes?

I think “muslim” is just synonym for “pure evil”. Why did they not ask if he was satanist? I bet that might have earned 20%.

100% of my wholly unscientific poll of me, myself, and I believe that the 54% who reported they believe Obama is a Muslim actually “deep down” are terrified that a black man was elected President, but understand on a subconscious level that expressing that fear would mark them as hopelessly racist, thereby invalidating their opinion.

Edit to add:
From the Vox article linked by the OP, this is the actual creator of the poll speaking:

Previous survey questions about Obama’s religion tend to sound like a pop quiz - such as “do you happen to know the religious faith of Barack Obama?” But by asking “what Obama believes deep down?” I was intentionally granting respondents license to stray from the president’s self-reported Christian faith. This reveals a prevalent willingness to distrust this president or categorize him as “the other” in terms of religion.

These are only proxies for general, personal feelings. Nothing more.

Those “feelings” reveal a lot. For one, that “Muslim” is a synonym for “evil.” For another, that there’s no way a guy who looks like Obama could possibly worship the same deity that they do.

Republicans didn’t care for Clinton either, but few claimed he was a secret Muslim or Buddhist or Hindu or whatever because when a white man claims to be Christian then that claim is accepted at face value. This is straight up racism.

Which of these do you think best describes Republican beliefs deep down?

“I am a Christian, and I am a devout Christian. I believe in the redemptive death and resurrection of Jesus Christ. I believe that faith gives me a path to be cleansed of sin and have eternal life.”

Much as I loathe Obama, I have trouble believing that the above statement he made reflects his true beliefs. He’s probably somewhere in the atheist-agnostic spectrum, and the rest is garbage contrived for his own political purposes.

If you’re going to falsely portray yourself as a “devout Christian”, you lose the ground to criticize others for falsely portraying you as a devout adherent of some other religion.

Sad that it matters on any of the answers given. There is no requirement for any religion to be President of The US. I don’t care if the president is Christian, Athiest, Hindu, or Muslim. Nixon was a Quaker for Pete’s sake.

Some day we will have another president and this will be a non issue… . . this may be my last comment because I may not be able to afford the internetafter what I’m seeing on the news right now.

So what you’re saying here is that your beliefs fall within party lines.

Nixon was a Quaker for Pete’s sake.

A quaker who swore an oath, no less. So not a very good one.

Does anyone believe that this statement Obama made is true:

I think you just told us where on the graph to look for your response, had you been one of those polled.

If you’re going to falsely portray yourself as a “devout Christian”, you lose the ground to criticize others for falsely portraying you as a devout adherent of some other religion.

If you’re going to criticize Obama for stuff his Christian Pastor said during the time Obama attended that church then you lose the ground to call him a Muslim. (Not that there ever was a non-racist reason to believe Obama was a Muslim.)