Why is the Obama hate so... weird?

I’m sure it’s happened elsewhere but I’ve noticed this about family via my facebook feed. Obama isn’t getting attacked because of his appointing ex lobbiests to positions of oversight, shutting down freedom of information act requests to the whitehouse, snowden, drones, and all.

It’s more: OH MAH GAUD HE PUT HIS HAND ON HIS NON-HEART SIDE! HE’S FROM KENYA! HE’S PUSHING A MUSLIM AGENDA! HE DIDN’T SALUTE THE TROOPS! HE’S THE ANTICHRIST!

I mean, really now? I don’t like the guy for a lot of things he’s done but… I remember back when Myspace was a thing people going on about how Obama is the Antichrist the bible says so. Then me proceeding to grab nearest bible and slam it in their laps ‘show me where it says this.’ Then getting a go to hell look.

My family, at the very least, aren’t racists… OK I’m pretty sure they may be, but there’s plenty of exceptions (I guess you could lump it under the ‘hey I’ve got a black friend’ defense.) It’s just…

wtf? To everyone that came of age before the bush II election cycle was it always like this where the republicans will sit and just chew and claw at a democrat based on little niggly things rather than matters of policy and appointment? It leaves me confused and hurt that otherwise very responsible level headed people just go full on stupid and buy into the facebook garbage posts and I’m trying to figure out why this is so beyond ‘oh they’re racist’ and moving on. that seems like too neat an answer to the problem and it also feels like I would be buying into the same divisiveness they do.

I want to understand why this is a problem and try finding ways, if not to solve it, at least to not get twisted in knots over the next 'you wanna hear what i just read about how your favorite bestest buddy Osam-0obama did HW HAD A BEER IN THE WHITEHOUSE ON SUNDAY!

Obama is the Antichrist

pretty sure this performance proves that Obama got soul

was it always like this where the republicans will sit and just chew and claw at a democrat based on little niggly things rather than matters of policy and appointment?

To everyone that came of age before the bush II election cycle was it always like this where the republicans will sit and just chew and claw at a democrat based on little niggly things rather than matters of policy and appointment?

there are similarities and differences. the republicans have always looked for things large and small to beat the democrats over the head with just as the democrats have looked for things they could beat the republicans with. in 78 or 79 carter went to camp david for a few days to come up with a response to a series of oil shocks and what was called an energy crisis. he spoke to the networks while wearing a sweater so republican pundits and some legislators started calling him jimmy cardigan. that’s similar to what some folks were saying about obama’s speech about guns where he teared up a bit at points and some republicans started talking about how the podium should be searched for onions. an important difference between 79 and now is that now the republicans have a mass media propaganda wing masquerading as a news organization which provides for the 24 hour a day airing of some of the most ridiculous crap. with clinton the republican party started to go batshit crazy, they said things about him that were insane, kind of like fox news does with obama, but there was no fox news until his second term. so the republicans didn’t impeach him until his second term. things got worse on that score as time went by. there really isn’t anything on the democratic side like fox news. msnbc, even when it had its most liberal lineup, still had conservative show anchors in parts of their schedule. it would take a 24 hour a day version of “democracy now” to even approach fox news and that show is almost as likely to criticize democrats as it to do so with republicans.

one other shift has occurred over the last 35-40 years that has made the situation worse. when carter was elected in 76 there were republicans in the house and senate who were more liberal than a median democrat and there were democrats who were more conservative than the median republican. on the whole, both parties are more conservative than they were in 76 but the republican party has shifted two or three standard deviations to the right while the democrats have only moved about half a standard deviation rightward. this has increased the polarization between the parties greatly.

in sum, while this kind of stuff has gone on since washington left office, the mass media loudspeaker called fox news and the increased polarization between the two parties has made things worse than they’ve been in a very long time.

wtf? To everyone that came of age before the bush II election cycle was it always like this where the republicans will sit and just chew and claw at a democrat based on little niggly things rather than matters of policy and appointment?

I want to understand why this is a problem and try finding ways, if not to solve it,

I think a lot of this is attributable to scaremongering in the media. There are plenty of outlets that are more than happy to talk about him like he’s responsible for the collapse of civilization and they’re not behaving responsibly because that doesn’t get them clicks and ad revenue (and it’s not as fun)

They’re tapping into the worst of humanity, kind of like Donald Trump is, but it’s even easier to be that sort of crazy when you’ve got a target to attack.

I’m not intending this as “herp derp, racist idiots”, but the overwhelming reason why the right went utterly nuts at Obama’s election is racism, racism and racism.

Political opponents will always try to dig up scandal, and they’ll invent stupid ones if they can’t find real ones, but the nature of the attacks (Birtherism etc) on Obama is unprecedented. Believing that his race wasn’t a strong motivating factor in that seems to me to require a large degree of hyperscepticism.

It isn’t nice, it isn’t pretty, but it is the core of the GOP base. They’re the party of the Confederacy these days. 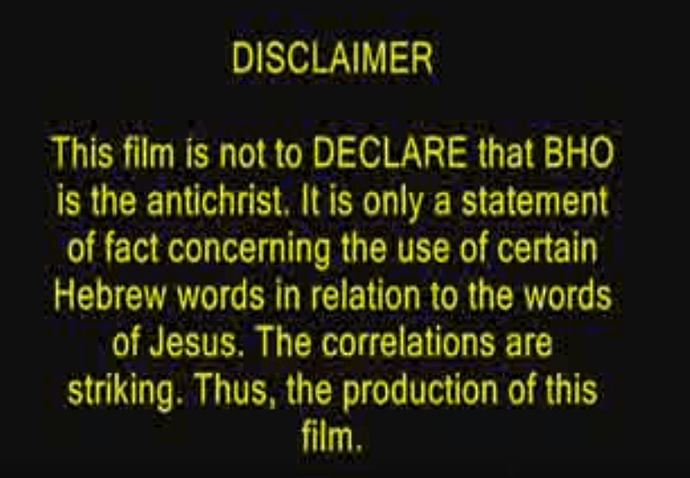 I’m not saying that he’s Satan. But, you know: SATAN.

If Obama is satan… He’s not very good at it.

But on topic, when you look at the policies he supports, he is very much a centrist. Too much of a centrist for my taste, but I still voted for him twice. The only thing that makes sense to me is ‘fear of different’. Not racism as in brown people are bad, but fear of people that simply don’t look like you. (Is that the same thing? I dunno)

I have no explanations. So I will leave you with a GWB painting (he really isn’t a bad painter!! His subject matter is odd, but I say go for it!) 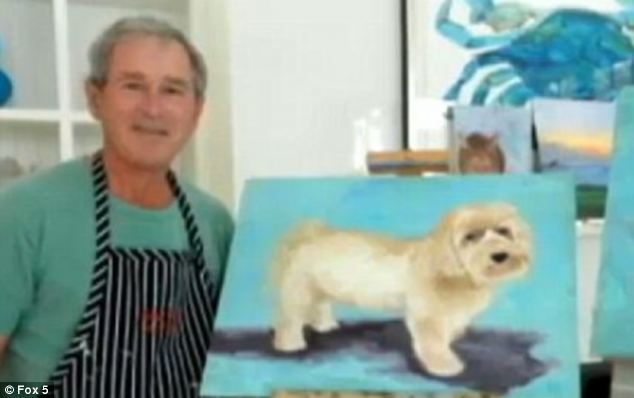 Periodically, I swing by world net daily, just to see what’s up. A real mix of wingbat politics, apocalyptic religion, and scams galore. I have no idea where it actually stands in terms of “liberalism–conservativesm” but a lot of Fox News watchers think FNC is mildly liberal, so…

I think the two major moments were Reagan solidifying the Republicans’ alliance with the religious right, openly empowering the most lunatic fringe of the party; and the Clinton sex scandal, where the party chose to make it full-time policy to focus on the personal over the political.

That’s not to say those things didn’t happen before, but they didn’t become the singleminded focus of the party’s entire political strategy until then.

Add to that the echo chamber that the internet provides, and things just nosedive into crazy.

The truly frustrating part is that I feel like I can’t even bring up my many real problems with this administration, because as soon as you declare the slightest bit of disillusionment, they feel completely validated and declare victory.

They can’t for the life of them understand that everything I hate about Obama can be prefaced with: “continued the Republicans’ disastrous policy of…”

I have no explanations. So I will leave you with a GWB painting (he really isn’t a bad painter!! His subject matter is odd, but I say go for it!)

You know what? I like that version of Bush. If he’d been able to just fuck off, be a slacker, and spend his time chugging beers and painting instead of being thrust into a career of politics and having to take far, far more responsibility than he was equipped to handle, he seems like he’d be a cool guy to hang out with. You know that stoner buddy you’d never loan money to, but always invite over when you need to feel better about yourself? George would have been great as that guy.

So I will leave you with a GWB painting (he really isn’t a bad painter!! His subject matter is odd, but I say go for it!)

Every ex-President needs a hobby.

I personally think Jimmy Carter found a more productive outlet than GWB, but maybe Bush is donating those puppy paintings to the poor or something. At least he isn’t trying to help out around the State department.

Personally I’m fine with dubya just painting his feet in a bathtub. (As long as he stays away from the state department, as you mentioned)

I’d be good with him as official White House painter.

She was systematically undermined by her own party, the opposition and an organised campaign by the Murdoch press, and eventually hounded out of office.

Immediately after her departure, the new government (the previous opposition) immediately repeated everything that she’d been so vociferously criticised for (making deals with minority parties that involved compromising on election promises; replacing a sitting PM between elections; etc) without a hint of criticism.

The sharp contrast in her treatment with that of other PMs was blatantly motivated by misogynistic double standards. Getting anyone to admit that in the press continues to be virtually impossible, however.

So Barack Obama is Hebrew now, not Muslim?

By the way, waw is never transliterated with O or U. It’s a consonant.

So Barack Obama is Hebrew now, not Muslim?