Pong is now 50 years old. Here's the story of its invention.

Originally published at: Pong is now 50 years old. Here's the story of its invention. | Boing Boing 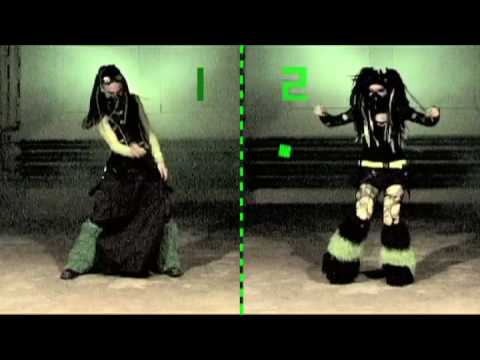 I have a Pong console in the original box. You would think it’s worth lots of $ - but apparently there are many still out there in working order. Guess I’ll keep hanging on to it…

I still love Pong for one reason. It’s literally the only video game that I can beat my adult son at.

There’s (not surprisingly) no mention of Ralph Baer and the original Magnavox Odyssey, which had a game nearly identical to Pong before Bushnell’s. Atari eventually settled with Baer and Magnavox over infringement. Bushnell “invented” nothing other than perhaps realizing that having coin-operated versions was a good idea for those who didn’t want to buy a home version.

The Magnavox Odyssey is the first commercial home video game console. The hardware was designed by a small team led by Ralph H. Baer at Sanders Associates, while Magnavox completed development and released it in the United States in September 1972 and overseas the following year. The Odyssey consists of a white, black, and brown box that connects to a television set, and two rectangular controllers attached by wires. It is capable of displaying three square dots and one line of varying heigh...

We got the Sears Tele Game version in 1975 a year before Atari’s home version.

I still have a “Telstar” version of the game in my closet. May or may not work anymore.

link to play it online for the bbs

Now I’m confused: I know for a fact that my friend had that on her family TV in 1972 or 1973 (not possible that it was later years) and it was called Pong, not Odyssey.

So did Magnavox Odyssey call it Pong as well, or was there an immediate roll-out of Pong to home TV sets, or what?

I also recall playing a console game of Pong before the Atari and Odyssey 2 came out (or before my family had them, at least); it didn’t have cartridges, it was only Pong. Of course, memory isn’t always reliable, but i’m fairly certain of that one.

I gave a 4-day training course for a Certain Industrial Control System Vendor, and one participant was getting visibly bored. I assigned him a mission to program a game of Pong using SCADA and a controller that had an assembly-like syntax. He delivered. That was 20 years ago, and it’s still one of my happiest professional memories. 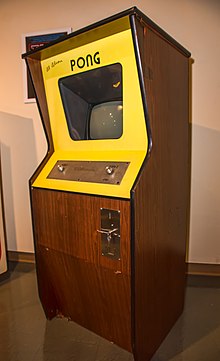 After the success of Pong, Bushnell pushed his employees to create new products. A new electronic technology, the large-scale integration (LSI) chip, had recently become available, which Bushnell believed would "allow pioneering in new" game concepts. Atari began working on the reduction of Pong from a large arcade printed circuit board (PCB) down to a small LSI chip for use in a home system. The initial development cost for a game on a single LSI chip was expensive, costing around $50,000 In 197...

@Nightflyer
I think you may be confusing the original Odyssey (1972) with the Odyssey 2 (1978). The former was a TV game with a set of built in games, the latter was a cartridge-based system similar to the Atari VCS (or 2600 as it was later called) from 1977.

I’m saying that I witnessed the game Pong, named Pong (not something else), played on a friend’s family TV set (remember, once upon a time there was only one TV per family), and I never went to that home (because I moved away) after mid-1973.

I know for a fact that my friend had that on her family TV in 1972 or 1973 (not possible that it was later years) and it was called Pong, not Odyssey.

I think you may be confusing the original Odyssey (1972) with the Odyssey 2 (1978). The former was a TV game with a set of built in games, the latter was a cartridge-based system similar to the Atari VCS (or 2600 as it was later called) from 1977.

I’m not confusing anything. I know the difference between the Odyssey and the Odyssey 2 (my family had the latter.)

And while I can’t quite recall which Pong console we had, it turns out there were quite a few of them:

Success can be a tricky thing. Become too successful and watch others come in to swoop in on the craze. Pong was no different than any other hyped product. Within just a short span of a year, other companies began to pop up creating and retailing their own versions of pong units. Varying shapes and sizes, and essentially offering the same game in different packages, From 1976 through 1978, hundreds of console designs from various companies were created to cash in the craze. Pong Clones were made around the world, some with really unique designs. The market came crashing down for Pongs by the end of 1977, when Atari released the home console that would change the world. 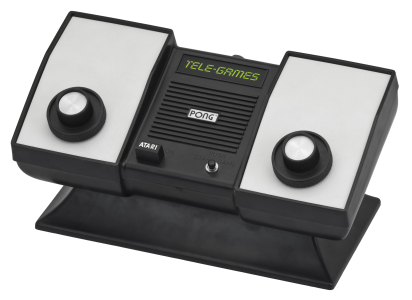 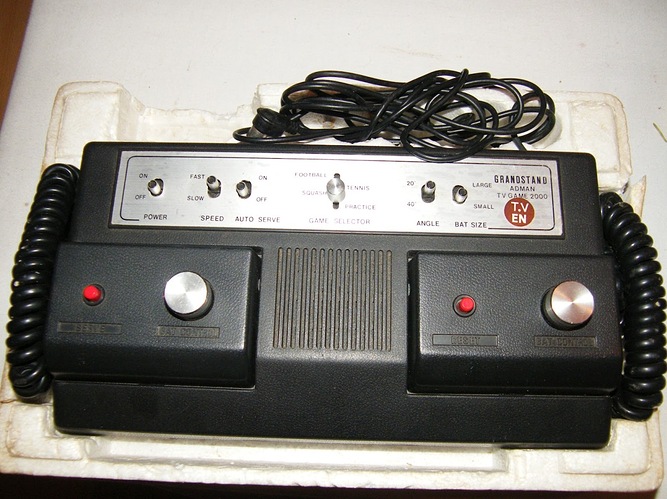 I think the second picture might have been what we had, but I’m not sure. It was a loooong time ago.

I suppose it was possible that one of the many knockoff TV game consoles (which then as now often cared little for whatever intellectual property laws or trademarks they violated) called itself “Pong” to attract fans of the arcade game, but no official home version existed until 1975

This is what we had: 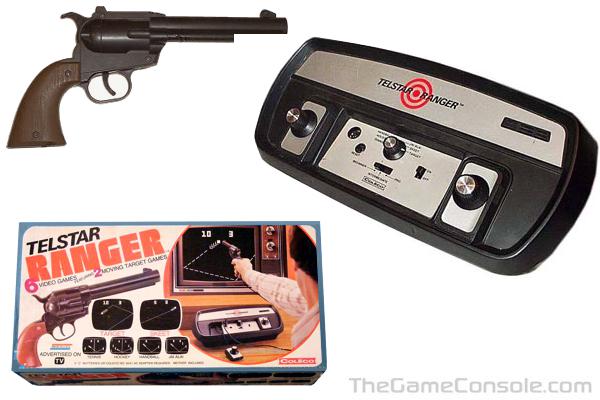 The paddles could be detached from the console and used at the end of a coaxial cable. For an extra challenge, my brother and I used to do without the paddles and just hold the end of the cable to control the game.