Trump spokesperson Ima Fascist said the campaign was inspired bytes story and was taking copious notes on how to make this program YUGE in the US along the southern border.

There is a great novel by the Korean author Lee Kiho dealing with this subject, it is almost reminiscent of Tom Stoppard’s .

It is called and was translated superbly by Christopher Dykas.
http://amzn.com/1564789195

I highly, highly recommend it.

One can only imagine what they’re doing in Rio to prep it for the World to view. Brings nightmarish images to mind…

People tend to forget that more-or-less until the late 80’s South Korea was about equally great as North Korea.

The South’s leadership had just about all the hallmark traits of US backed freedom-loving-anti-communists, controlled press, torture, the stuff in this story, etc…

Honestly, I am kind of impressed at whoever was running HR at the CIA for picking these people so consistently.

So either the authors of this article just made things up or don’t know much about history, because Park Chung-hee was assassinated in 1979 a full 9 years before the olympics and Chun Doo-hwan
was not his successor. I hate bad journalism.

It looks like a poor summary on Boingboing’s part. The original source looks more accurate, although I’ve only had time to give it a quick skim.

The article starts with a boy taken to the camp in 1982. Then in the next paragraph refers to them being rounded up prior to the 1988 Olympics. Which is technically correct. But dubious.

Quite a few paragraphs later we find

They ended up as prisoners at 36 nationwide facilities. By 1986, the number of inmates had jumped over five years from 8,600 to more than 16,000, according to government documents obtained by AP.

Yeah, I’ve read that far. According to wikipedia, Seoul was selected for the 1988 Olympics on 30 September 1981. The timing looks about right to me.

Perhaps they were rounding them up circa 1975 and upped their efforts once they won the bid?

The South Korean Government is in complete denial, they are cruel they are greedy and they are just like their brothers in the north if they continue on the path that they are on. The slave camps around the country are an example of a government that refuse to except that people can’t and should not over police the homeless, mentally ill and homeless children. They should look at America, America has learned the hard way, are mental institutions were ripe with abuse they had to be closedown. Many people in America who had mental illness were murdered and severely abused. I would say that most people are not equipped to care for the mentally ill, it is a very difficult job.
If you don’t learn from your past you will repeat the same mistakes in the future.

They should look at America…

Given the state of our mental health system, I don’t think people should look too closely. America’s jails now function as de facto asylums, with many of the issues that such a thing would bring about. 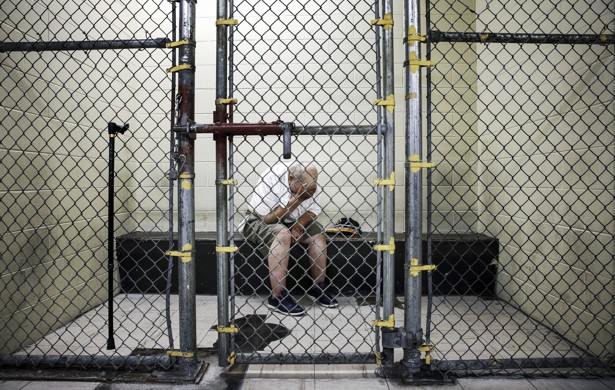 At Cook County, where a third of those incarcerated suffer from psychological disorders, officials are looking for ways to treat inmates less like prisoners and more like patients.

Also, @doctorow, South Korea sent these folks to “concentration camps” WHERE rape and murder were commonplace…otherwise, I’d like to be sent to the South Korean concentration camp branded for sexytime, homebrewing, gardening, motorcycle riding, and surfing. Thank you.

Toss 'em in the bay…not like anyone would notice.

The most interesting takeaway, aside from how incredibly recent this is, is that the daughter of the dictator behind this is currently president, some of the people involved are currently high-ranking government officials, and said (current) government is still going to great lengths to cover this up. Also all of the perpetrators got off scot-free and are still alive and living in the ROK without facing any repercussions.

Everything is Japan’s fault.

I mean, if you’re a country that did something like this recently enough that the people involved are only a few years older than me, or you’re a very large country with a long history of huge peasant revolts that killed ~50 million peasants within living memory, it’s always good to have a credible bogeyman at hand to get your people riled up enough at someone else that they don’t realize that their own government is their worst enemy.

I’m not saying that Japan couldn’t handle their present-day treatment of WW2 a lot better. They certainly never really came to terms with it the way the Germans did, but even if they did, I don’t suspect it would make any make any difference in how the governments in Korea and China use them for propaganda.

Apples & oranges. It’s a comparison in that both are fruit but the hats where the similarities end. It’s hard for the West to understand but cultural differences extend even to warfare. Non western countries just don’t deal with defeat the same. The western idea of gentlmans war with negotiated settlements just never applied. Result being that for South Korea & the PRC, nothing short of complete nation self destruction wold constitute a suffiency apology on the part of Japan.