The cherry tree blossoms withered by the fart-blast, now that’s some mono no aware for you.

Alternately, replace the people with robots and you’ve got great storyboards for the Pacific Rim sequel.

Given Howard Stark’s proclivities, his taste in art trending that way doesn’t surprise me.

The scroll, no joke, is titled “He Gassin’.”

Man. I’ve simply got to get around to seeing that last season.

Indeed. It really is a blast.

The resolution seems rather low for a recent digitization.

Next time the great-grandkids say they’re bored, I’m having them draw a collaborative fart battle for Mrs. Old.

It is of course immediately obvious what this led to in later years.

Leave it to Japan, they’ve already turned it into an anime… 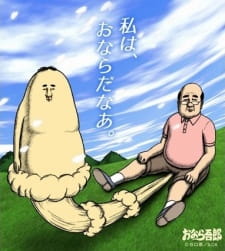 Onara Gorou follows the everyday life of Gorou, the "most admirable of farts," as he solves problems in ways that only a fart can. (Source: ANN)

Does that pre or post-date Ren & Stimpy?

The cherry tree blossoms withered by the fart-blast, now that’s some mono no aware for you.

(I’ll see myself out now)

The cherry blossoms
are but a fart in the wind
of a fart from me.

On Fart Mountain I
fart to the four winds and bless
my stinky fart smells.

A full moon, crisp smells
of farts borne on a mild wind:
autumn is coming.

this tradition is still strong in japan today:

Fart silent but deadly and carry a big fan.

Also, what the hell are they cooking up to induce such overpowering flatuence?

Now we know how many farts it takes to fill the Albert Hall.