Here is an article that looks at the levels of illicit drug use in the United States: 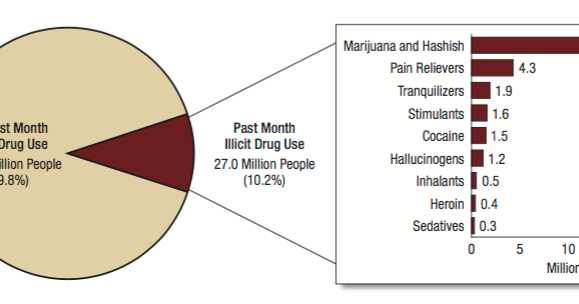 Illicit Drug Use in America and the Failed War on Drugs

The Substance Abuse and Mental Health Services Administration looked at national drug use in its latest report for 2014 .  In its report, S...

So much for three plus decades of the War on Drugs.

So I can now look forward to my pain meds only being filled for 7 days. Or are they going to open up methodone-like clinics where I pick up my daily dosage in the morning?

This is news? The Inquirer was on this weeks ago.

I think the National Enquirer also reported that he suddenly dropped dead from AIDS, which is ridiculous. It’s sad that he’s gone. This incident illustrates the danger of prescription drug abuse. Overdoses aren’t limited to heroin users and crack addicts.

Devastating. His death is a major loss, no matter how he died and it’s heartbreaking how the struggle over his legacy is already unfolding in such a contentious way. And as @Mister44 indicates, his tragic death will only be used to punish people who legitimately need these medications. I do wonder if curtailing legal opioids will lead to a spike in illicit drug use.

I do wonder if curtailing legal opioids will lead to a spike in illicit drug use.

Depending on where you live, it already has. Heroin is cheaper and easier to get than weed or second-hand opioids around here, and you’re not likely to get a reasonable number of real opioids if you do somehow get a script. You may get a 30 day supply of useless crap like Tramadol, though. So, yeah, heroin. Skip the fake stuff with the liver killer in it, get the real deal for less than your prescription co-pay.

his tragic death will only be used to punish people who legitimately need these medications.

I would argue that Prince legitimately needed significant pain medication himself. I’m not going to offer an opinion on the type of medication, or addiction in general, just that he had long term pain for most of his adult life and that’s why he started taking the medication.

Oh, no doubt. It’s less about prince and more about how his death will be used to promote a particular agenda.

I forget the source (possibly NPR), but I recall hearing a radio story that followed (with her consent) a 45 year-old woman who regularly bought heroin for her dying father because his morphine regimen was no longer effective. All of which makes me wonder: why is heroin Schedule I in the U.S. but not fentanyl, which is far stronger?

why is heroin Schedule I in the U.S. but not fentanyl, which is far stronger?

Is it because Heroin can be easily produced from nature, and fentanyl is a synthetic made in a lab and thus easier to regulate?

Initially that was my thinking, too. Yet morphine and codeine—both naturally occurring, no further synthesis required—are Schedule II.

Now that I’ve done some further reading, it seems that while heroin is more effective for pain, it also has a much easier time crossing the blood-brain barrier than morphine, resulting in a degree of euphoria that is counterproductively disproportionate to its analgesic powers, however clinically significant they may be.

[Edit: Apparently heroin also depresses the respiratory center far more than the clinically equivalent dose of morphine, which is reason enough to deprecate its medical use.]

I used to think that it was pure rubbish when I heard addictions (including alcoholism) referred to as a “disease.” Then one day I watched a show about DNA-based diagnosis and treatments.

Apparently lab mice now come in a wide selection of genetic traits. Some are tailored to be more susceptible to a variety of cancers, or to diabetes, or obesity or any number of other conditions.

That includes a line genetically more susceptible to addiction. And that genetic trait exists in some humans.

I think you’ll really enjoy reading Jackie Scully’s 2004 essay 'What is a disease?’.

But I haven’t heard of people making illegal morphine or codeine… does it happen? Or is it harder to produce than heroin is?

That’s where I was / down to refills every three days due to a “pill mill” bust (see recent posts on F! Today for BK).

I’m now having to taper off- very quickly- and am being put into a Sudoku puzzle of meds to replace one Rx of Oxycodone. Lots of side effects vs none with Oxy. I’m an outlier, it’s not my fault. Yay.

I took my first replacement pain killer yesterday & immediately passed out for four hours. What an improvement!

But thats neither here nor there - what none of this addresses is why people are so miserable that they not only turn to Oxy, but then transition to Heroin if/when they can’t get it.

What is it about life in America is making everyone so GD miserable?

I doubt that ‘ease of synthesis’ factors much in the DEA’s scheduling decisions. Methamphetamine is Schedule II, despite widespread illicit manufacturing, because it’s still considered medically useful as a last-resort therapy for ADHD, obesity, and intractable narcolepsy. Psilocybin is Schedule I because of its repeatedly demonstrated superior efficacy to placebo and other antidepressa—wait, no, sorry. Hippies. It’s Schedule I because hippies.

My old dr went to work in and ER can can’t prescribe me any more.

New doc has me 15 day doses. WTF? And they made the stuff I am on, Tramadol, as a Schedule 2 drug now (IIRC), so more restricted.

I am trying to find a new new dr to give me at least a normal dosage.

I have been self dosing UNDER the guidelines for 10+ years and have a well documented history of chronic pain.

I have been self dosing UNDER the guidelines for 10+ years and have a well documented history of chronic pain.

I dose(d) under the recommendations/Rx for about that amount of time as well - but as I’m sure you’re well aware never admit to that. It’s just as bad as taking too much, any deviation is Bad™ - regardless of what works best for you.

Best of luck n keep your head down. I’m a true believer of the Chinese proverb: The nail that sticks out gets hammered.