Purina sued over claims it killed 4,000 dogs with 'toxic' food

People seem to have forgotten that dogs are wolves, and that cats are basically miniature lions. Every animal (and we’re animals, too, something vegans seem to forget - accidentally or otherwise) has a dietary genetic blueprint, and you don’t see wolves and lions chewing down on grass, do you…?!

The myth that humans need a high-carb/low-fat diet seems to have pervaded vet psyche, too, and our pets are suffering from the same diet-related diseases that we do because of it.

This is bound to be controversial, but I’d ban vegans from keeping non-herbivorous pets; it’s one thing for them to destroy their own health by eating a, virtually-nutrient-free diet, but it’s quite another for them to force that diet on a pet - or a child. Unless they can prove the pet - or the child - will be fed an appropriate diet - otherwise it’s abuse. Vegans claim they’re vegan because they’re against animal cruelty, but I can think of a good few cases where vegans have been indicted for pet and child abuse.

Humans are the only animal species to deny themselves a healthy diet because it’s ‘cruel’. When was the last time a lion quit mid-hunt and thought, “Hang on a minute! Zebra have a right to live, too! I’m so evil for eating them, I think I’ll just munch the veldt like they do”.

I’m afraid I simply can’t understand the vegan mindset, and it’s not for want of trying. Especially when they do things like this: 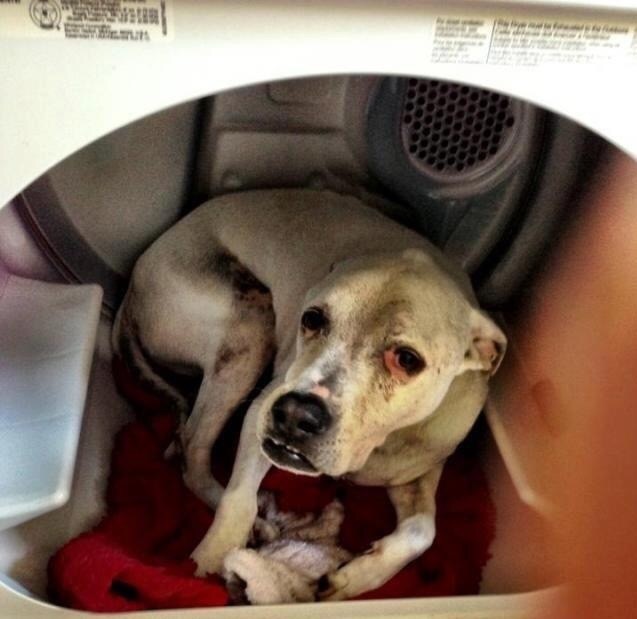 That’s a vegan dog - looks a picture of health, doesn’t he…?

I won’t get into your misinformed comments about veganism in general, but I will say that I’ve known plenty of vegans and not one has so much as considered feeding their pets (cats, usually) a vegan diet. They’d be the first ones calling the SPCA for that poor dryer dog.

In fairness, what we bring into out kitchens in the first place isn’t what it used to be.

I’m sure the BARF folks will come out of the shadows to jump on this, but I wouldn’t recommend a raw diet for an inexperienced pet owner.

I added emphasis there because, as a BARF guy, I’d like to preemptively come to your defense in case there are those who want to jump on your comment. Choosing a BARF diet was not something my family did lightly or without a lot of careful research and planning. It also hasn’t been a static thing. We’ve had to make adjustments, and have sometimes supplemented it with high-end canned food.

Any BARF folks who want to get foodier than thou are missing the fact that you’re clearly paying close attention to what you’re feeding your pets.

I’ve gotten to the point where I only really shop in four of the 12 aisles at a typical grocery store because all the other aisles are filled with digestible non-food. Don’t think that the pet food aisle is any different from this equation. Newsflash: Mainstream dog food is rubbish, just like cereal, frozen dinners, most canned food, canned soups, crackers, cookies, chips, white bread, soda…

What does this even mean? Of course it’s food. Canning, freezing, and preserving have been around for centuries at this point. It’s not like it’s untested technology. Out modern diets are extremely nutritious, the only problem seems to be we get too much out of our food. Unless you want to go back in time to a period when most Americans got their energy from a diet high in sugar, and suffered massively from deficiencies, or before Sinclair wrote The Jungle, or when when we were using lead as an artificial sweetener. I’d say we’ve got it pretty good.

Interesting, however be careful about getting too fancy with your dog food selection. I recently switched from a high priced fancy no-grain filler dog food that was purchased at a local store to science diet at my vets recommendation. My dogs energy has doubled and all her digestive issues went away. Many of these high protein brands have weird ingredients that can trigger low level allergies in pets. Basically, I am now a walking advertisement for science diet. And pumpkin… plain canned pumpkin for upset dogs.

I moved 2 posts to a new topic: Non-foods

Basically, I am now a walking advertisement for science diet. And pumpkin… plain canned pumpkin for upset dogs.

We always keep cans of pumpkin in the pantry for the dogs.
We’ve got 4 rescues and at some point, one will have an upset stomach about something, and it works great.
Once and a while, we’ll just open a can and add some to their food anyhow.
We used to feed our dogs Inova - then they were bought by Purina and they started having problems.
We’ve been feeding two of our larger dogs the Natures Domain salmon food from Costco and the two smaller dogs a smaller kibble from Kahoots - also salmon, their brand and both have been great.

I’ve done the home-prep diet thing. Our last Sheltie required a low protein diet in her old age, because of reduced liver function (too much protein equals improper metabolization, equals high levels of ammonia and urea in the blood, equals hepatic neuropathy). Finding a proper balance of nutrients to mix 2:1 with a meat-based canned ration to keep the ratio of protein calories at 15% or less was a challenge, and mixing up batches of the stuff every 4 days was time consuming. Though much like cooking for your family, you can do more harm by doing a good thing half-assed if you don’t have the time, knowledge, or skill to do it properly.

If your dog does well on a good quality commercial ration, then I see no problem with feeding that. The mistake that people make is a) assuming that dogs are small wolves - they’re bloody well not, and they have evolved to metabolize carbohydrates more effectively than their wolf ancestors and b) as such, all they need is meat - ignoring the fact that even wild dogs and wolves get vegetation and fiber from eating the digestive contents of their herbivorous kills.

Ours get a grain-free kibble (Fromm 4-star), mixed with Weruva “human-style” canned or a freeze-dried raw supplement, and they get plenty of natural bone, tendon, and meat/fish jerky treats.

We tried those DvP foods for a previous dog with serious dietary restrictions, and more than one bag showed up smelling of rancidified oil/fat. Never again.

People seem to have forgotten that dogs are wolves, and that cats are basically miniature lions. Every animal (and we’re animals, too, something vegans seem to forget - accidentally or otherwise) has a dietary genetic blueprint, and you don’t see wolves and lions chewing down on grass, do you…?!

People need to stop projecting their diet fantasies on their pets. I don’t care if it’s veganism, “paleo,” Atkins, low-fat, whatever: your pet doesn’t need to share your neuroses.

I once taught a lion to eat tofu…

There is something about this story that doesn’t seem right to me… It just sounds kind of mass-hysteria-ey. People’s pets aren’t invariably dropping dead from beneful, and the potential causes they’re citing just don’t sound like killers to me. Mycotoxins are real, but that would be testable, and Purina wouldn’t go into all out denial mode over something that could be independently verified. As for propylene glycol? I wrote an extended explanation of why I doubt that it’s all that big a deal as an additive. The FDA lets people put it in ice cream and ketchup.

This really sounds to me like a bunch of people whose animals died tragically all managed to come together over the coincidence that they fed them the same thing. It would be like people bringing wrongful death lawsuits against Crest because a large number of people who had heart attacks in the past year use their toothpaste.

Hey, neat to see your blog! So sorry to see it’s on Blogger and you won’t be able to post those HAWT long-chain molecule pix for much longer…

No, dogs are CARNIVORES. Web DVM is full of shit, just like Web MD is full of shit. Have you ever looked inside a dog’s mouth…? That’s a rhetorical question because, if you had, you’d not be insisting that they’re omnivorous. To the best of my knowledge, the entire Canidae family is 100% carnivorous.

When was the last time you saw a wolf, jackal, coyote or hyaena eating anything but meat…?

No, dogs are CARNIVORES.

Carnivorous? Yes. Obligate carnivores like cats? No. Dogs have been feasting off human garbage for fifteen thousand years. The relationship generally has never involved us giving them quality protein, when it has historically been harder to come by than it is today.

Purina sued over claims it killed 4,000 dogs with ‘toxic’ food

Why did Purina make those claims in the first place. Could have saved themselves a whole passel of trouble…