How can Biden be both executed and a puppet??

How can Biden be BOTH executed AND a puppet… I just… 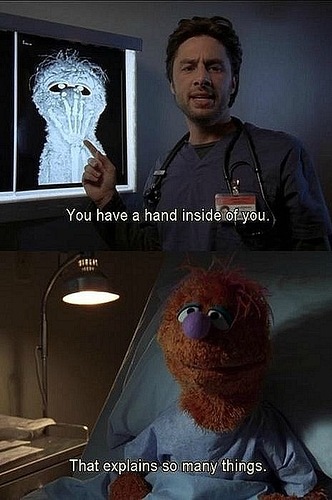 I appreciate that this article focused on the effects of this on families, but I couldn’t help notice how often a description of a family member’s former self went something like “he was such a calm person; she has a masters degree and was a respected teacher for 30 years; he was the most liberal of liberals; she’s never been into conspiracies or anything like that” – almost as though the information (or narratives or whatever) itself is somehow passively contractable and responsible for their change, rather than requiring the person to be in a state of being willing to believe or accept it.

Again I realize there is other writing about the how and why of believing this nonsense, was just struck by the cumulative effect of all these stories in one place.

It’s why I’m sure it’s only a matter of time before Ivanka starts a right-wing version of Goop.

I recall the stories pointing out that Alex Jones is selling the same woo-infused crap as goop
eg. Infowars and Goop sell the same exact pseudoscientific "wellness" products — Quartz

Years ago I was arguing with friend about the prospect of thinking about something happening would not, by itself, make it happen (a/k/a the book “The Secret”).

“Q-wazy” is just one more example of the ongoing need to teach critical thinking.

Tony’s father is an immigrant who was always a logical thinker, his mother has multiple degrees from Ivy League universities, and his sister had a left-wing political outlook. Now all three of them have fallen down the QAnon rabbithole.

Is there anything like, I don’t know, a combination of anti-depressants and opioids that would dull the senses enough to make this happen? Maybe that plus covid isolation?

I know we didn’t used to be this stupid unless it was instilled at birth via indoctrination of some sort.

In that context, the evangelical and spiritual/wellness woo “gateway” aspects make perfect sense. Once a gullible sucker is identified it’s easy to rope him into something like this.

I imagine the Venn diagram overlaps with people who are convinced into joining pyramid schemes totally legitimate multilevel marketing businesses like Herbalife. They’ve been primed all their lives into believing things are true not only in the absence of evidence, but in the presence of overwhelming evidence to the contrary.

My Mom claims… I try to gently set her straight, but even if she concedes my points

it’s a good sign you can at least discuss it. it’s not even an option for me anymore. i feel awful i didn’t try to intervene earlier on when maybe it was.

my family’s always had it’s problems though. my mother’s relative isolation, my uncle’s ptsd and love for conspiracy theories - i was recently told that “invasion of the body snatchers” was basically a coded message explaining real life events. and everyone just nods along

don’t find it funny, it genuinely makes me scared that so many, many people can be this deep into absolute crazy-land.

same. but i also wonder if this isn’t some natural reaction to realizing a lot of stuff you believed in: american exceptionalism, hard work brings success, that america treats everyone the same, etc. comes straight into conflict with reality.

a person’s choice is to accept that their life’s worldview was wrong, or slide into an increasingly wild worldview. and each step into irreality helps seal the deal

i think my family might calm down, but i don’t think they’re ever going to come back. they’re able to live their lives just fine without reality, so why would they bother?

Whoa, tense discussion!
I’d say that much of the heat comes from raw incredulity - we are talking about fully-functioning adults here.
So what happened? In the old days, in order to make people commit questionable acts, you started with parades, band music, spiffy uniforms. That’s madness I can recognize from afar, and it’s still being used, and it does damage.
But this? It really looks poky, sloppy threads with no-one properly reasoning, demented hearsay, everything slapped together and making no sense whatsoever. And they call it research.
So maybe that’s what them new-fangled social media really discovered: a novel way to make people go crazy.
Wonderful, well done guys. Grateful I am not.

it’s a good sign you can at least discuss it.

Thanks - I hope it lasts! Since literally every comment she makes about current events is laced with this stuff, I’m afraid that at some point she’s going to get tired of my opposition to it. She already believes that I think I’m “smarter” than her, and that I’m “arrogant,” and that I’m “liberal” (spat out as an epithet) so I have to be very careful about how I phrase my debunking. Eventually I think she’s just going to stop listening.

The sad thing for me is my mom and/or dad are probably in on the Q nonsense. They don’t post outright Q related content but stuff that’s adjacent on Facebook so I’m a bit scared for them.

Your position is unfortunate. If you nuked her F***book account, she wouldn’t get fed this malarkey all day, but she probably would be very upset woth you. Can you block cable channels, like Faux and Newsmax, using the tools meant for parents?

One of the ways this has been so insiduous is that everybody supports “abusive pedophiles are evil” and “we should protect children,” and so sharing this kind of stuff, and starting to get involved with groups that appear to be against trafficking of kids, etc, doesn’t seem like you’re heading on a train to crazy-town. (Plus, anyone who tries to talk you out of it is basically supporting child abusers, right?)

She already believes that I think I’m “smarter” than her, and that I’m “arrogant,”

weirdly, that’s one of the things i was told too.

i chalked that up to the fact i am an explainer, but i do try? to balance it by being a listener as well. as family, id hope there’s some grace for people just being who they are - but right now it seems like that’s only allowed to flow in one direction

oto, maybe it’s another gem from the qmunnity learned along with everything else

Unfortunately no, as I live hundreds of miles away. If I was local, though, I’d surreptitiously install a PiHole to sink any IP lookups to those domains. Of course, she’d just think she was being targeted by the Government.

She already believes that I think I’m “smarter” than her, and that I’m “arrogant,”

I’ve heard this. And every time I think “It’s never occurred to you to consider it plausible that maybe in some subjects I do know more than you, yet somehow I’m arrogant???”

My general feeling is that a lot of these are just unhealthy defenses people are picking up by swimming in them on the internet.

These fuckers give us totally legit New Agers a bad name, grumble

That certainly makes it harder to keep her anchored to reality. I’m sorry, and sincerely hope she doesn’t sever relations with you over this Q garbage.

i do try? to balance it by being a listener as well

I’m interested because I’m not sure what I expect. I know from talking to some people who were Flat Earther’s, for instance, that they often absorb the high level points but not all the details, and so when they try to explain it to people it all falls apart – they start resorting to “Oh, you should just watch so-and-so’s YouTube channel, he explains it so much better.” (To be fair, many people who try to explain correct scientific principles may sound like this too.)

But the Q stuff is such an echo chamber with everyone contributing as well as just being receptive, I wonder whether their stories end up having greater internal logic.

If it’s the former (they’re unable to explain), I wonder to what extent “just listening” can help someone discover their own inconsistencies. (“Biden has both been executed and is also a puppet,” etc.)

There’s an opportunity for someone to start a spoof one now, to head her off at the pass.

How can Biden be BOTH executed AND a puppet