Clearly designed for PA announcers that need to maintain that essential gravely voice.

I’m not a smoker, don’t like being around people smoking, and would frankly love to see all smoking disappear from the face of the earth.

Despite all that, I still find this hilarious and somewhat awesome. If I were a smoker who someone needed a PA system in a location where I was able to smoke while announcing, I would totally buy this.

Probably would have been a big seller when I was a kid. It’s been so slow and gradual and I don’t think there’s enough appreciation of how far things have come from the time where smoking was so commonplace. I remember cigarette butts on the floor of the grocery store, and my school bus driver puffing away doing his route. I still associate the smell of a bowling alley to cigarette smoke.

The one that sticks out in my mind from my childhood is the little ashtrays bolted to the side of every arcade cabinet in the arcade.

I can recall when the tables as McDonalds restaurants all had their own branded ash trays.

I’m always kinda “huh?!” when I see ashtrays built into plane armrests and bathrooms (labeled “Do Not Use,” of course). But how old is the plane??!

Oof! Cool, but pricey!
I smoke a small variety of things on occasion, filthy habit, I know. But my motto is, if you’re gonna do it, do it with style.* So while this is a bit beyond what I’d be willing to spend, I appreciate the sentiment.

*and not indoors or in other people’s space who don’t like it.

They were like a stamped thick tinfoil. I would take a Hardee’s ashtray and would rub the bottom of it with my fingernail, which stretched the metal, and over time it would start to become dome shaped.

I think I’m part of the final generation to remember the first question you’d hear at a restaurant being “Smoking or non-?”

I remember cigarette butts on the floor of the grocery store, and my school bus driver puffing away doing his route 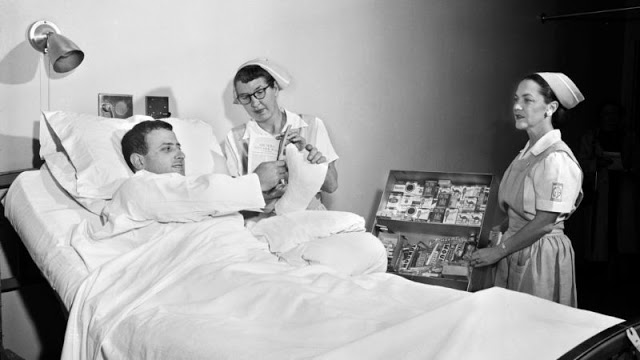 Just a Few Decades Ago, Hospital Candy Stripers Used to Sell Cigarettes to...

Just a few decades ago, hospital candy stripers sold cigarettes to patients in bed. Today, culture has changed so much that at many of the same hospitals, you can’t smoke anywhere on the entire campus.“It’s

Yeah, a bit pricey. And the cigarettes should totally be in a little motorized drawer like a CD tray.

Added to my list of “what could I use all that electronic junk for” projects.

And today they won’t even let you smoke at a petrol station.

A cool device, but an odd one - cigarette smoke is supposed to be really bad for electronics, isn’t it?

I remember playing with the foil ones! But they weren’t all foil: 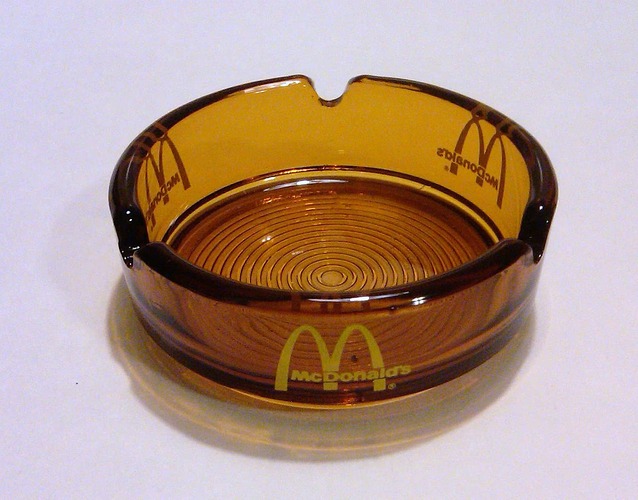 I worked in various restaurants when I was a kid.

Cigarettes put out in the mashed potatos, why?

I remember gathering up all the ash trays at the end of the night and running them through the dishwasher.

And cleaning butts out of urinals, I don’t miss that.

I’m so glad public smoking has gone away for the most part.

I’m always kinda “huh?!” when I see ashtrays built into plane armrests and bathrooms (labeled “Do Not Use,” of course). But how old is the plane??!

I was wondering the same thing in an airplane bathroom recently. A No Smoking sign with an ashtray right underneath. And this was an A320neo, so definitely built after in flight smoking bans.

I think the logic is “Smoking is absolutely forbidden here and you will trigger the smoke alarm and be prosecuted, however if you are still stupid enough to try it, we’d rather you used this ashtray than try to stuff your illicit cigarette in the trash compartment where it will set aflame the wads of used tissues”

I was more hoping/assuming that the planes were purpose-built for selling everywhere, including countries that still allow smoking currently. But you’d think they’d put a slug/cover in 90% of planes then, not waste time/materials on actual ash tray production.

If anyone actually DID try to use one, I suspect the smoke detectors would activate quickly.

And a motorized ashtray.
Come to think of it, I guess I’ll ditch the PA part completely and replace it with a humidor.