Just FYI, there seems to be a bit of confusion at this point whether or not the PP was the target. I’m guessing it is, but it’s still an active scene, from what I’ve read. They still haven’t caught the dude.

‘If PP was the target, then this just shows how violent Christianity is. If you read the Bible, it’s constantly saying that you should kill the person who wronged you and how you should rape the women of defeated enemies and if a women lies with a man and they are not wed, you should kill her (but not him). Truly a religion that doesn’t belong in the 21st century. We should round up all the Christians and put them in camps!’

No one will say this if the shooter is a ‘Christian’. They will say ‘he’s an isolated case’ and ‘not all Christians are this way’. Yet if a Muslim fundamentalist does something similar, the whole religion is tarred with a broad brush, even though most Muslims are just as horrified by the fundies actions. One disturbed person doesn’t speak for a whole group of people. Just remember that in the next few days as more news comes out about this.

Yep. Sorry I’m out of likes!

Would it be possible for people to wait until actual facts are released and confirmed before announcing the motive and exactly what lessons we should learn from the situation? There is already a comment here about how this shows how violent Christianity is. All of us have suspicions about who may be behind this horror, and those suspicions are affected by our personal views and prejudices. The primary issue with making and publishing assumptions before you have facts is that there is a real hesitation to publish a correction or retraction, even after you find out that you were completely wrong. And people will notice. An example is this very site reporting on “white extremists” burning Chicago area churches recently. I completely understand the desire to know as much as possible about incidents as soon as possible, but making stuff up to satisfy that demand does not help.

It would appear that you think you know quite a bit about the Bible, without having actually read it. This is common on both sides of almost every argument.

That aside, I think we all know this is the result of whipping up furious anger against a political opponent, and then arming them. It’s working just fine today, just as it did in 1793, although the politics is almost exactly opposite. These days people are calling it stochastic terrorism, but we need a better name. Stochastic is not an 8th grade word.

If you had a conservative relative who said yesterday at thanksgiving that christian terrorists don’t exist, now is the time to gloat that they are wrong.

Officers told him to leave immediately because appearing at the scene while wearing firearms and that equipment was a bad idea.

Suuuure… Because police would never do that.

I’m not claiming I know anything about the Bible. What I was pointing out was if a Muslim does an act of violence, we blame the whole religion even if we know nothing about it. If this shooter claims he was a ‘Christian’, people will say ‘He’s an isolated case and Christianity doesn’t teach this.’ instead of what they do with a Muslim.

I don’t know the facts about the whole thing yet, but I wanted to point out how people will react if he claims to be a ‘Christian’ as opposed to a Muslim.

Your comment seems like satire, which does not seem appropriate right now.
If you are serious about the Christianity thing, you should probably do some more research. The texts of the Big Three religions all say some pretty specific things about grim and heartless punishments for things that most of us do all the time. I cannot speak for Judaism, but the vast majority of Christians know about the biblical punishments, but also know that such behavior is incompatible with civilized society, so they ignore them. There is also the issue of the New Testament, which emphasizes turning the other cheek and being “the good Samaritan”, and that sort of behavior. So while there are contradictions to be found in the Bible, the parts that were written the most recently seem to preach a message of pacifism. The Koran and other Islamic texts seem to mostly work in the reverse of that. The later writings are much more filled with horrible punishments than the earlier ones. But that does not matter to the vast majority of Muslims. Just like Christians, they ignore the parts that are not compatible with civilization. Nearly all Muslims believe that the punishment for apostasy is death. The Koran is pretty specific about that. It is not really up for alternate interpretation. But knowing that is a long way from actually being willing to participate in or allow such a punishment.
FYI- I am not a follower of any of the big three religions.

The comment wasn’t met as satire in any way. I was doing my best to point out that as the facts come out during the next few days, the religion of the shooter will dictate the response somewhat. Look what happened after Paris, the idiots in the GOP started screeching how the refuges were terrorists and were coming to the US to kill us all (paraphrased). Look at Trump lying about Muslims celebrating about 9/11 even though there is no evidence of that. The only reason he gets away with it is due to people thinking that Islam is evil rather than accepting that some crazies are hijacking a religion to justify their hatred of other people.

Nothing actually that wrong about @cameronh1403’s summation there. And they are right to post the boilerplate response for a terrorist attack with “muslim/islam” swapped out for “christian/christianity”.

the vast majority of Christians know about the biblical punishments, but also know that such behavior is incompatible with civilized society, so they ignore them.

Except for that one about the gays. That one is totes legit.

Also, because this conversation is going to go to the “guns in Amurika” well pretty damn quickly:

I am not going to defend any thing Trump says. He has always seemed to me like a 10 year old’s imaginary version of a tycoon. I do agree that many people will use whatever the current news is to further their political views. I do think that the mainstream media is somewhat more hostile towards Christians than they are towards Islam, with certain notable exceptions. I think that government spokespersons are also likely to minimize Islamic involvement in terrorism, not because they are secret Muslims or anything like that, but because they want to keep Islamic terror stats low. That is why the Fort Hood shootings were “workplace violence”. The same thing is happening in my home country, where there is much more control of the media, and violence by immigrants is simply not reported. Sometimes code words are used. This is all done with the best of intentions, to prevent panic or reprisals against those who are innocent.

"Pro-lifers" would be totally okay with a database to monitor them all since "they have nothing to hide," right? #PlannedParenthood
19 Likes
Max_Blancke November 27, 2015, 11:14pm #16

I said “the vast majority”. But that is my opinion, as I have not surveyed all Christians. Even so, I have not heard any news lately about anyone outside the Islamic world being stoned or thrown off of buildings for being gay.

Then you aren’t very good at google-fu.

You are absolutely correct, I stand corrected.

Ye ain gotta look so far as Uganda. Last I heard of a LGBT person or person suspected of bein LGBT getting stoned to death in the US was as fur back as 2011. But people call for it all tha time.

Scott Esk, a T-Partah candidate in the Okie GOP called for stoning LGBT to death, but he was defeated in the primaries for showing his hand too soon.

Some people put Imam’s on terrorist watch lists for expressing same, or try to pass laws to close their mosques as inciting terrorism, on the basis that leaders get followed. Not a lot of that for those pastors that called in plain language for the bloody mob murder of a specific group of people.

But there ain a lotta call for stoning in the USA… stones are handy, useful things when a mob needs arming. In the USA, ain a need, you want yo mob to have easy access to projectile weapons with which to head on down and deal some death to the evil-doers, you tell em to come packing God’s own heat as tha founding fathers intended.

Just FYI, there seems to be a bit of confusion at this point whether or not the PP was the target. 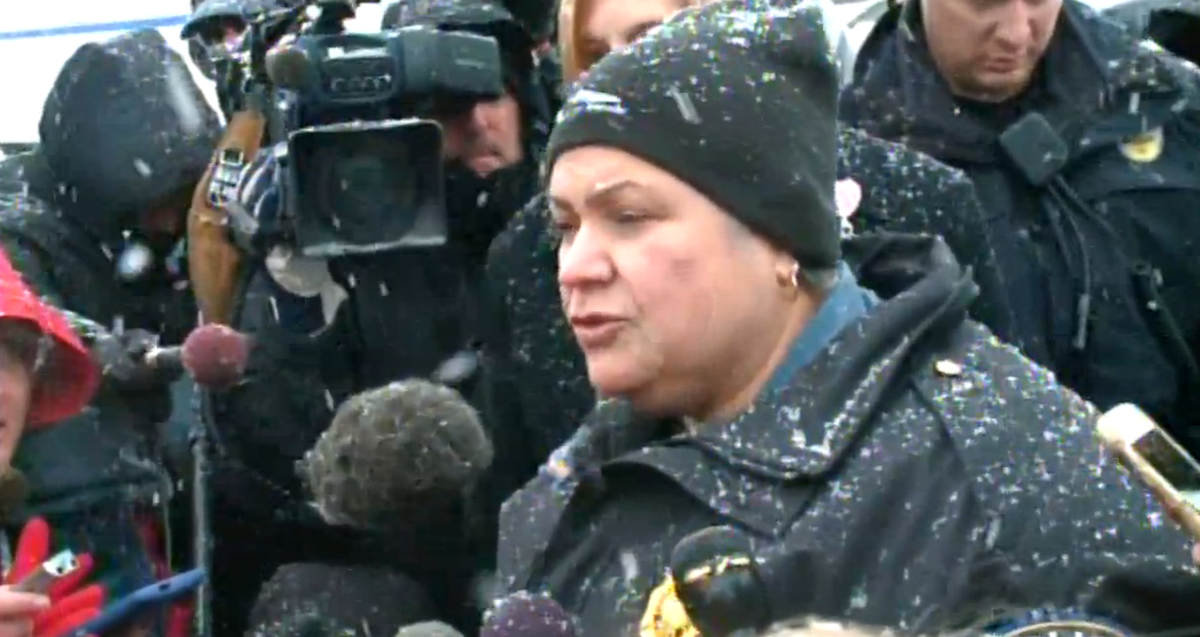 Of course, it’s Buzzfeed, so grain of salt and all that. There’s still some leeway even with that statement, but it’s getting thinner.