Real stories of psychiatric support dogs, and the people who rely on them

They tried using cats, but it didn’t go so well…

I think it’s great that these people have dogs who can help them. I think we could use better regulation, though. The dogs described in the article are all trained support dogs that will never misbehave when they’re brought into a situation where dogs normally aren’t allowed. Unfortunately, there are also a lot of people who have emotional support dogs that are just dogs they found, and never bothered to train. It needs to be made clear that the only support dogs that get to go everywhere with you are the ones that are specially trained for that role by professionals and can be trusted not to make trouble. This isn’t to say that everyone who wants a support dog shouldn’t have one, just that they need to be well trained.

“Emotional Support Animals” are basically the equivalent of claiming glaucoma for your pot card. Sure it’s bullshit, (there’s lots of research showing the pot isn’t any good for glaucoma. It has minimal effect, and is way outperformed by other drugs and therapies) but people don’t really want to be bothered making sure it’s true or not. I don’t begrudge anyone their weed, or their pets, but don’t make up bullshit just to get them.

The museum I volunteer at had a memo go out to staff this summer: “Cats are not service animals. No cats are permitted in the museum. Dogs and miniature horses only.”

I am really sad that no one’s brought in a miniature horse yet.

I don’t begrudge anyone their weed, or their pets, but don’t make up bullshit just to get them.

Not sure if related, but in the US the placebo effect increases - and only in the US, not elsewhere.

My friend has a giant freaking pyrenees as his companion dog. His dog is more like a small polar bear than a dog at 140 lbs. … and only 18 months.

Pyrenees are truly an amazing animal. 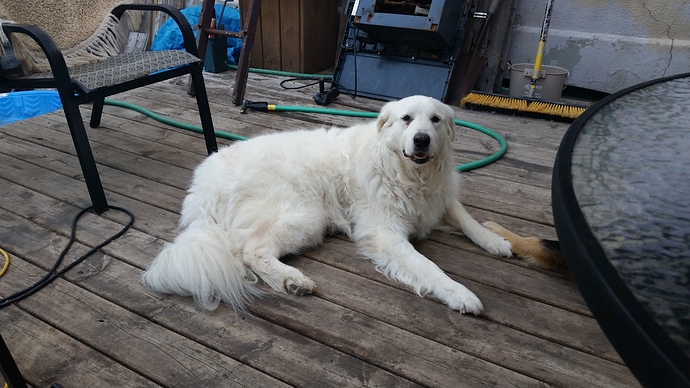 Mines only 100 lbs. She’s more like a cat than a dog…unless you step wrong around her pack.

I think it’s thoroughly bogus that humans default to their communities being “human-only” areas. There is no reason why humans should expect to decide what constitutes proper behavior for other animals. Other animals have in many cases lived in the same areas for much longer, and there is no pressing reason why they should oblige themselves to what humans decide is convenient.

Up until 2011, cats were considered by the DoJ to be potential service animals. They were legally allowed to be trained and certified as such. After 2011 only 2 types of animals were certified legally to be “service animals”: dogs and miniature horses.

I would note that the article doesn’t even mention the horses. Most people aren’t aware of them at all. Not that that’s my point.

Actually my point is in fact the cats. Take for example my ESA, Strax. Strax is a pure bred Ragdoll who is by the Department of Justice legally guaranteed Emotional Support Animal status. This is not some ‘made up’ tag. This is a real legal status. And the fact is, until 2011, I could have had him officially certified and trained and as a real [by your article’s point of view] service animal.

So what does Strax do for me? Well for a start, Strax was alerting me to my oncoming seizures WITHOUT being trained to it since he was 3 months old. He would sit down on my foot or in front of me as I walked and refuse to let me move until I had paid attention to his warnings. He would even go so far as to search for my husband and bring my husband to my side to make sure I was safe. It took several repeats of this before we realized that he was doing this all untrained.

You see, I have a little understood condition known as PNES or Psychogenic Non Epileptic Seizure disorder. It’s typically found with people who have PTSD. Which I also have. I’m a veteran of the USAF. Diagnosed by the military. However, PNES is not a terribly understood condition and it gets little to no recognition because unless you are epileptic your “seizures” aren’t considered “real”. Therefore, you must be ‘faking’ them. Funny how that happens to the outliers.

So I was recommended to get a support animal. But since I don’t have epilepsy, a seizure dog wouldn’t be covered by insurance. So a cat was a good option for me. Ragdolls are typically chosen because of their breed reliability and their temperament. They are often trained as service and therapy cats. Of course, I missed the DOJ’s random window. Why they decided to change the laws I don’t know. I haven’t found a good reason in my research.

What I do know is that articles from folks like you, who I respect do a great disservice to folks like me with great animals like mine. Strax is not a ‘fake’. He’s helped me make HUGE strides in my therapy and shortened my seizure times. He’s made my life monumentally safer. But he’s also made it where I have to try and decide whether my safety is worth going out.

You see, folks like you make it so I have to decide if dealing with the ‘she’s faking it’ stuff is worth whatever the trip is for. When I went on a family vacation to Disney [that we’d saved 2 years for], I almost got left in an airport in Florida because the Airline didn’t want to respect the letter from my Psychiatrist stating my need for Strax. Legally, according to the DOJ requirements, that’s ALL they are allowed to ask for or need. But because there is so little understood about anything that isn’t a DOG with a service animal hood, they almost didn’t let me go home.

Legally, I am NOT required to have him marked. Legally I am NOT required to have any paperwork on him. Legally I don’t have to have a tag for him. The only thing I have to have with me is the letter from my doctor. Everything else? That’s to protect us [me and him] from folks like in the article who’d “report (us) to the police”. There are NO requirements as to breed standard or size. Teacup poodles could be therapy dogs. They could be seizure alert dogs.

That article is so full of misinformation is saddens me. Most of my conditions have been dropped on my head in the last 2 years. I went from a healthy person who was always helping the disabled to being disabled. So it’s been a real eye opener.

If you want to help, get informed. Start by talking to those of us who are the outliers. We’re here and Emotional Support Animals are granted legal status for a reason. And until a random act of DOJ, some of us were Service Animals too.

Firstly sir, thank you for your service.

Secondly, ignore the ignorant and finally, as I indicated above regarding my friend, you need your animal for health and so bash on.

My friend suffers PTST from active duty as a policeman, and as such needs his dog to be in public.

People criticizes him openly as a healthy appearing 50 year old man, but he takes the time to explain his position to those who inquire/complain.

He is a true ambassador.

That is a majestic beast. Give’er a belly rub from japhroaig

Well, dog parks are an attempt to integrate dogs into a community, with a variety of results.

Dogs are a direct representation of the internal state of their owners.

Just got automated social media notification yesterday of a friend’s birthday. Said friend committed suicide a few months ago. She had an emotional service dog, and had constant stories about how they were treated suspiciously in public as a result of so many fraudsters just wanting to bring their pets with them.

I also have a dear friend who really should get handicapped parking rights, but it’s the same problem: because there are so many fraudsters, and her physical disability isn’t immediately obvious, she doesn’t want to deal with the aggravation of strangers bullying her about whether or not she really “deserves” the parking space.

Cheaters aren’t just a nuisance; their actions have serious consequences.

Well, dog parks are an attempt to integrate dogs into a community, with a variety of results.

Sure, to integrate dogs into a human community. But dogs are not recognized as citizens subject to human law.

Dogs are a direct representation of the internal state of their owners.

It’s easy to suggest that they shouldn’t, since that would be convenient for me! But it’s not so easy to demonstrate why they have an obligation not to bite, nor why they should be treated any differently than a human who bites (a month in jail, versus execution).

Our (U.S.) culture has a widespread prejudice against cats and tends to favor dogs. I’m not sure I’ll ever understand why. It’s a real shame that this prejudice affects people in your position.

I was talking about humans.

Yeah. We are owned by two cats ourselves.

Not only do they have us trained, but the dogs as well 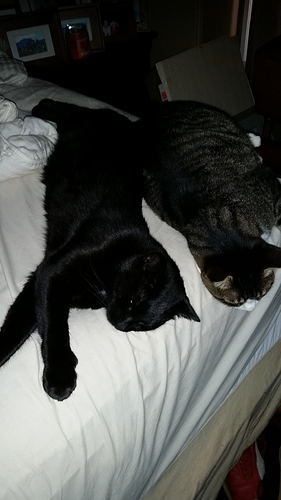 They are either asleep or sharing data…

OOOOOO!!! KITTEHHHHHH!!! Give them a scratch from me, please!

You’re dog is a cutie-pie, too, but I’m definitely a cat lady.