Recording music and other stuff

More of a “Stuff I want to make”. I need some pretty general advice about recording.

I’ve got a few noisemakers with a standard 3.5mm audio out and want to turn them into actual tunes, using a crappy laptop running Audacity and/or LMMS.

There is no dedicated mic input, so what’s the best way of getting one to the other? USB mic? Tiny mixer thingy? Budget is tight, local music shops aren’t an option, and I have absolutely no idea what I’m doing.

This’ll probably sound kind of odd … and not the set up I use.* But in most houses, it’s hard to get the environment quiet enough to not pick up a bunch of noise if you’re using a vocal condenser mic.

*Though I love my Rode NT 1000, I don’t get to use it much because it picks up all the noise in my house.

I’d recommend a low end but name brand USB interface (Behringer UMC202HD … I don’t have this but the reviews are decent) and a pair of name brand stage mics in the $100 range.

[spoiler]My actual current setup … a Sennheiser e835, a $100 4 channel mixer, and an H4n. lol I can’t wait until I can dedicate a room I can cover in comforters so I can use my Rode without spoiling the audio with a bunch of Noise Removal.

But my current setup does record clean audio.[/spoiler]

I’d recommend a low end but name brand USB interface (Behringer UMC202HD … I don’t have this but the reviews are decent) and a pair of name brand stage mics in the $100 range.

As the stuff I’m doing is almost entirely electronica, do I actually need mics? Budget could probably stretch to an SM57/58 if they still make them, but I’d rather drop the dollars on a MIDI controller.
I mean, can I just take the headphone/speaker line out and run it straight into the mixer (which should, I assume, let me record direct through USB).

It’s been a while since I messed with this sort of thing. Last stuff was an old Tascam 4-track cassette and MIDI was still a size of stereo.

Oh, haha. If you don’t need mics, you can probably skip all of the above. Unless you want to record some vocals or whatever. Then a ~$100 USB condenser mic will probably get you by.

I’m not the right person to ask for equipment on that end of things. Though I would really like a Launchpad Mini.

I have too many gadgets right now to get anything else without finding some stuff to get rid of first.

If you don’t need mics, you can probably skip all of the above.

I think the mixer is just the sorta thing I need. Only need a couple of channels to play with and going via a USB port is the way forward.

Yeah, neat aren’t they. I’m looking at one with the mini keys and less pad, the Launchkey Mini. [quote=“Ignatius, post:4, topic:80233”]
Unless you want to record some vocals or whatever. Then a ~$100 USB condenser mic will probably get you by.
[/quote]

Vocals may come later, providing I can properly destroy the voice. Like, real messed up. Clean audio for me is…not a priority. I’ll work with what I’ve got and if it’s muddy, crackly and noisy then I’ll embrace that. It’s not like anyone’s got to hear this or anything.

Well, since you ask, I’ll tellya what I use, though it’s probably not applicable to your situation. Still, it’s cheap and sounds good. I’ve been in a half-assed rock band on and off since 1990 or so, but we never had any decent gear. Now that we’re old and living in different counties, we wanted to write music together again without the lengthy commutes, so we tried getting the M-Track Plus for me (drummer/rhythm guitarist) and our lead guitarist, figuring we could email tracks back and forth to each other. 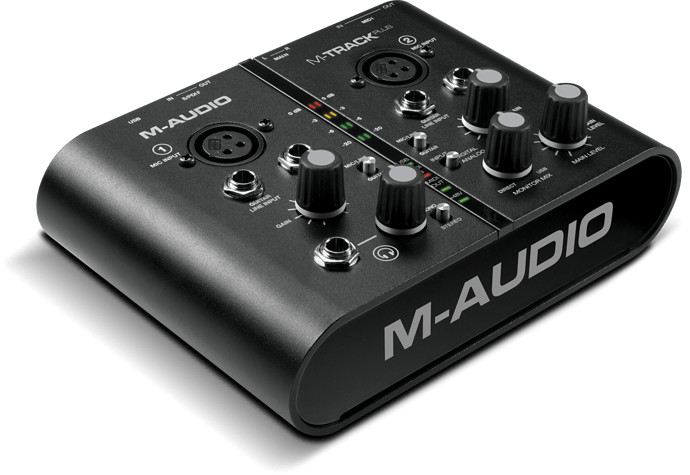 It comes with ProTools Express, but the software doesn’t actually recognize the hardware. At all. So the CD-ROM is essentially a coaster.

But as it turns out, the device works perfectly well (with very low latency) with Reaper, which is a pretty heavily-featured audio workstation that costs all of sixty bucks. I dunno if it’d be remotely useful for MIDI stuff, but as a way to get XLR and 1/4" analog signals recorded on your laptop, it’s been pretty spiffy. I basically run my drum mics through an old Behringer mixing console, and send the L/R signal through the M-Track to the computer, and then record guitar and bass and vocal tracks through it afterward. Sounds good enough for me. The only limiting factor is my talent, such as it is.

Anyway, the old M-Track Plus is way obsolete now, though mine still works fine. Maybe the newer versions are better. Probably still around $149. And I gotta say, Reaper is about the best $60 I’ve ever spent, musically speaking.

Well, since you ask, I’ll tellya what I use, though it’s probably not applicable to your situation.

Not sure that matters that it’s not applicable. I’ve got a lot to figure out and knowing what other people use and like is helpful in shortlisting. And It’s not like I can go and have a play with anything before I buy it.

Besides, it might not just be about me. If I need to know, chances are someone else might.

a way to get XLR and 1/4" analog signals recorded on your laptop, it’s been pretty spiffy.

That’s mostly what I’m after. MIDI stuff can be done via another USB port with a softsynth doing the work, no line should be needed, if I’m understanding things right. [quote=“Donald_Petersen, post:6, topic:80233”]
Reaper is about the best $60 I’ve ever spent, musically speaking.
[/quote]

Googled and now Downloaded for trial.

At the moment, the free/open software’s good enough and works, but it’s… awkward… to use Like, not very friendly. Unpolished. [quote=“Donald_Petersen, post:6, topic:80233”]
Still to be had for around $100,
[/quote]

Cool. Still as good as they used to be? Damn things used to be built like tanks…

@M_M, if you have an iPad or iPhone, Garageband is fucking brilliant, and you can get an iRig or comparable line in for like $30.

@M_M, if you have an iPad or iPhone, Garageband is fucking brilliant, and you can get an iRig or comparable line in for like $30.

No i-devices. Never seemed to have enough readies to enter that whole eco-system.

Or, something more fully-featured for under $50: http://www.musiciansfriend.com/pro-audio/lexicon-alpha-usb-desktop-recording-studio

I really like the price on that. And the size. Thanks!

Still as good as they used to be?

As far as I can tell. I have two SM58s, and both my dented 20-year-old one and my less-dented 5-year-old one perform like new.

So it looks like I’m late to the party, just found this topic.
You definitely need a dedicated audio interface, recording through your computers audio card will introduce lag and its pretty hard to have to later find that yo have to manually sync things up. Don’t even try. Having said that, if your budget is nonexistent then you should give this a try:
http://www.asio4all.com/
What is it? Its a special driver that will allow you to record with minimal latency, its a pain the in the ass to set up and at some point you’ll need an actual audio interface so try it out just to get started and keep an eye out for used recording interfaces on craigslist.
One last thing about audio interfaces, if you’re going to be doing electronic music, you’ll likely need a midi interface, you can get a separate audio and midi interface or a combination of both or a midi interface with a built in midi interface through USB, but at some point you’re going to want to record some audio, even if its an old analog keyboard or banging on some pots and pans just for fun. AVOID USB MICROPHONES!!! Do not even go here, they are very limited, get a separate interface and mic. Some people might e fine with recording everything with a single microphone but you don’t have the budget to experiment, get something that’s future proof.

I’m not familiar with LMMS but audacity is not the way to go, its great for editing audio but not meant for multitrack recording. Frnakly, no open source solution is pro level but if you must, Ardour is as good as it gets.
If the problem is cash, go with reaper http://www.reaper.fm/.
They’ll allow you to run in demo mode with no restrictions for as long as you want and if you ever want to buy the software, its only 60 bucks.
Sonar sometimes goes on sale in the steam store for very little cash and its very polished.

Mics:
A shure sm57 is a good mic to start with, its a good all around mic and used in a lot of pro recordings (that doesnt mean its a good mic, jus that you won’t go wrong with it

)
But if cash is tight, I recently purchased this at a pawn shop for 14 bucks, you can get it new for 30, you could do a lot worse for your first mic:

Here’s a thread on that mic, at the bottom you’ll find a crappy recording I made using only that mic
http://forum.recordingreview.com/f170/360-help-70940/

So that’s my recommendation: ASIO4ALL and REAPER to get you started, and if you’re looking for a cheap mic, the cisno is cheap and “good enough” play around with that for a couple of months and be on the lookout for a cheap used audio interface with midi capabilities.

If you have any questions about the technical stuff (ASIO and MIDI can be challenging at first) PM me and I’ll be glad to help out.

Much stuff to read, thanks!

I picked up a slightly broken 2 channel Yamaha USB mixing console (AG03) which after some slight fixing is doing a top job at getting recordable sound from onto the craptop. MIDI keys is the next step. Loads of messing about still to do.

Currently dropping that into Reaper which is still baffling me in odd ways so I haven’t got it quite yet.
Is there anything like the old FruityLoops from many years back? I tried a not-entirely-legit version of the modern one (FL studio) but it didn’t play nicely on old tech.

I’ve played around with Ableton live, might be more in line with what you’re looking for
https://www.ableton.com/en/trial/

This topic was automatically closed after 241 days. New replies are no longer allowed.