And let us not forget the dub-tastic sound of The Great British Spring!

Plate reverb is a distant second to having an actual room (or different sized rooms) to use as a reverb chamber. In fact some of the artists she mentions used room reverbs (the Beatles used to sneak into the Abbey Road chambers to smoke pot.) But how many people have the space for that?

That said, I have considered trying to build my own plate (Tape Op magazine had instructions in one issue on how to do it), but I know it would be tough to make one that didn’t sound tinny (even good plates tend to sound kind of metallic to me, less like being in a big room and more like being in a metal oil tank (which has it’s own sound too.) She does note that tapping the plate to make a booming sound is a nice effect by itself (you can do this with spring reverb too, it sounds “boingy”, and with digital reverb just tapping the tip of a 1/4 plug will get a similar effect.)

I my opinion tape delay (or digital delay) is the best studio effect ever created. I think King Tubby and Lee Perry would agree. (But that’s just like, my opinion, man.)

But how many people have the space for that?

When I joined the BBC as a radio studio manager (what they call a sound engineer) in the early nineties some of the mixing desks still had the controls for sending audio to and from shared remote echo rooms. The spaces were long gone, but it was nice to see the vestigial echos from the past represented by those knobs and dials.

Apparently there are recordings of other artists that have the (high) Beatles laughing and fooling around on their records. I think I read that in “Here There and Everywhere” by Geoff Emerick, who recorded the Beatles. Great book.

I worked at Henson Recording (formally A&M Recording) in L.A. and they had some really nice reverb rooms. Also a full set of plates and springs.

A bit of a nuance, and I know the plate mentioned is called an Echo Plate, but this is not echo (or delay as it is properly known) at all, but reverb. The article should be called How a Plate Reverb works.

The article should be called How a Plate Reverb works.

Yah I didn’t want to mentioning this, but it needs pointing out.

I always wondered about that. It might make those records more valuable to Beatles collectors.

Absolutely. Fair point. Just love me a good room. And springs always sound so boingy to me. I guess around here that’s ok.

Someone was building one back in college at the campus radio station. It was much bigger than this – maybe 4’ x 8’ – but that’s all I know about it.

And now they can be simulated in software. (Of course nothing like the real thing, grumble cough grumble get off my lawn etc.)

Since I already know this technology, having grown up in it, I skimmed the video. So maybe I missed the part where she mentioned that the Ecoplate was a budget knockoff of the venerable German EMT devices that preceded it, and sounded infinitely better. Every time she whacks on that thing you can hear it shudder. The EMT plates, by comparison, were glassy smooth. She’s having a great time but she’s telling only a third of the story.

I my opinion tape delay (or digital delay) is the best studio effect ever created. I think King Tubby and Lee Perry would agree. (But that’s just like, my opinion, man.)

I was going to post the same opinion. Mileage varies when it comes to the “greatest effects” but I’m still smitten with my precious RE-501. 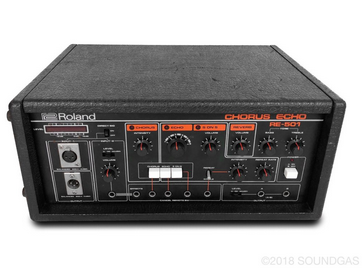 Just love me a good room.

True that. As someone often humming, clicking, and clapping my way around interesting spaces I get a lot of stares!

I’m not sure how I feel about digital reverb. Obviously I use it, like everyone does these days, but I lust after having access to a huge room or vintage plate. I do notice the very fake sounding digi reverb on lots of 80’s hits. Newer digital reverbs do sound more realistic.

A story: a record label I know of was working on a reissue of a classic 1960’s LP that was recorded at Capitol studios. Sony supplied the wrong master, it was dry, not a lick of reverb. The novice intern engineer they had working on the tape was afraid to ask for any help and was trying to see if he could replicate the reverb himself in protools. Nope. I’m sure he learned a bit there, anyway.

And springs always sound so boingy to me. I guess around here that’s ok.

I was going to post the same opinion. Mileage varies when it comes to the “greatest effects” but I’m still smitten with my precious RE-501.

The thing is “reverb” has been around forever, even the simple recoding sessions that Jerry Wexler and Ahmet Ertegun did in the early days of Atlantic used “fake” reverb: they recorded the bands in their NYC office on a simple reel-to-reel, and placed one mic in the stairwell to get reverb, but creating a controllable echo, particularly one so exaggerated, was unique and new.

Brian Eno always cited EQ as the greatest studio effect, and there are valid reasons for that as well. I’m sure everyone has their own opinion and reasons and it’s hard to declare a winner.

A gold-tiled room actually sounds slightly different than that.

don’t know how that looks in a ring-tone suite

Getting a little ASMR off of that effect and her calm vocal describing it.