they might have failed in the sates, but the Super Sentai franchise is alive and well in Japan and has never stopped coming out with new shows.

I’ll only support any gritty reboot from this point forward if it is a reboot in which the main characters are replaced by Gritty.

I watched this fairly recently. It wasn’t terrible. There were many bad choices, of course, but it wasn’t unwatchable. But the worst thing it did was not allow the Power Rangers to actually be Power Rangers.

I like the gritty 2015 short film. It’s especially nice that it’s over in 15 minutes and then you can get on with your day. Plus, Katee Sackhoff! 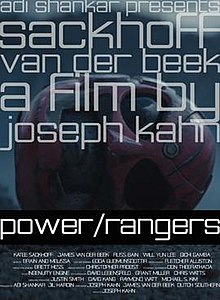 Power/Rangers, or Power Rangers: Unauthorized, is an American superhero fan short film directed and co-written by Joseph Kahn, produced by Adi Shankar and Jil Hardin, and co-written by James Van Der Beek and Dutch Southern. It was released on YouTube and Vimeo on February 23, 2015. It is based on the franchise of the same name. After the Machine Empire defeats the Power Rangers and destroys the Megazord in battle, Earth's governments negotiate a truce with the Machine Empire and the Power Ra...