Someone’s going to be doing the midnight flit to Moscow if he loses.

They want to sell the loans, but the report claims it is unlikely that anyone will buy Drumpf’s debt.

What about the 10s of millions of voters going on and on about what an amazing businessman he is? Surely all those Real American™ financial geniuses are willing to bet a few bucks on a sure thing.

If it wasn’t for their deferential treatment to this con man Trump never would’ve been able to sell himself as a “successful billionaire” in the first place.

I hope Trump loses everything and everyone who ever entrusted him with their money ends up fighting over the scraps for pennies on the dollar.

Good luck with that one Douche Bunk, he only pays people who do a good job (supposedly).

Deutsche Bank and the equally distressed and dysfunctional Wells Fargo were the only two major Western banks that would still lend this deadbeat grifter money over the past couple of decades. Certain non-Western creditors, meanwhile, have spent the last four years getting some payback (although, to be fair, the payback was just autocrats allowing them to keep running their banks – cost of doing beeznus).

Elizabeth Warren kicking down the door? I like that image!

Deutsche Bank is just the mechanism for writing down the money involved in transactions that went down years ago. Don’t forget former Justice Kennedy’s son was involved in those loans…

This guilt-by-association assertion is even sketchier than the Hunter Biden story, even if it is true. If I don’t care about Hunter Biden, why should I care about justice kennedy’s son? Trump is beholden to DB and and the dictators either way, and adding ad hominem attacks about connections like this just gives the apologists something to dispute that is easier to manage.

Here are some great candidates to purchase this loan and followup accordingly:

I would encourage you to believe whatever you choose. But your estimation of the sketch factor is way fucking off.

The families are far more connected than just this, and there’s while there is not yet a smoking gun, it is extremely sketchy. 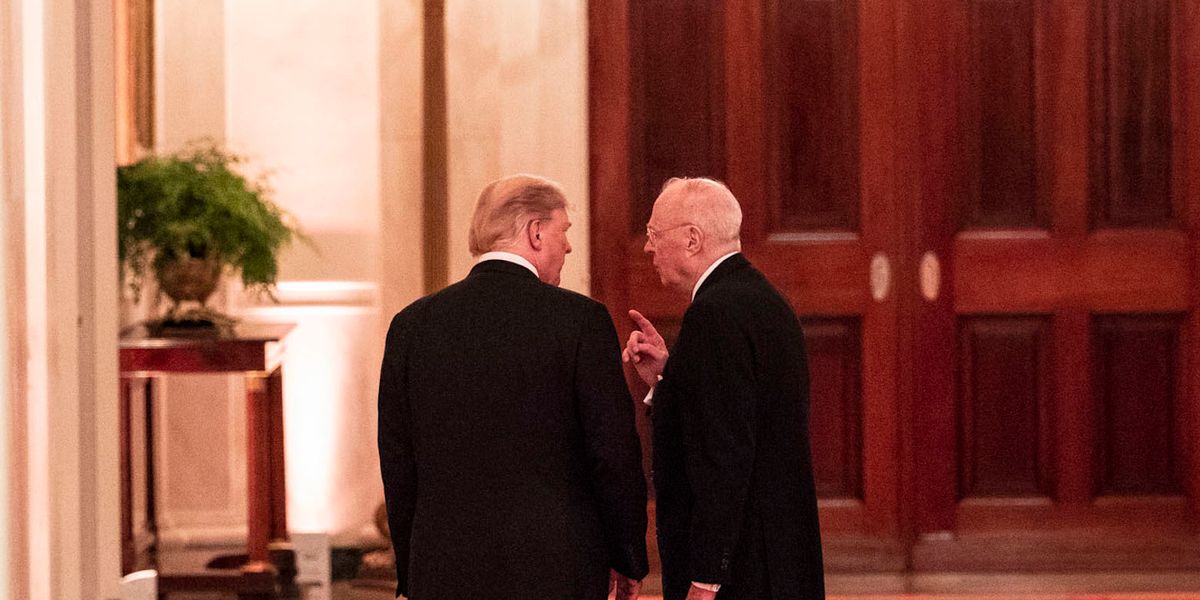 During Justice Anthony Kennedy's 31 years on the U.S. Supreme Court, liberals and progressives had a love/hate relationship with the Reagan appointee — praising him for his rulings on gay rights and abortion rights while slamming his economic rulings...

They want to sell the loans, but the report claims it is unlikely that anyone will buy Trump’s debt

They should have thought of that earlier. Putin would have been in the market.

If it wasn’t for their deferential treatment to this con man Trump never would’ve been able to sell himself as a “successful billionaire” in the first place.

I hope Trump loses everything and everyone who ever entrusted him with their money ends up fighting over the scraps for pennies on the dollar.

To which I can only add that I hope their futile attempts to recoup the loss trigger massive investigations into their dealings and their almost certain involvement in money laundering.

They should have thought of that earlier. Putin would have been in the market.

He’s already up to his tiny hands in debt to various Russian government connected mobsters and other bone-saw aficionados. Deutsche Bank is just the tip of the iceberg, pathetically trying to differentiate themselves from the other crooks.

Deutsche Bank isn’t trying to force Trump to pay off the loans early. It’s doubtful that they could, contractually. They’d like to sell the debt to another bank or to other investors - DB would be “paid off” by whoever bought the loans, and Trump would be on the hook to make payments to that new third party.

But - no one wants to touch those loans, DB was the only Wall Street firm desperate and dumb enough to keep lending to the clown - so unless they can sell those loans off to the Russians, they’re stuck.

The trouble is that the assets then need to be sold to recoup the money.

Who is going to want to buy Trump’s gold spray painted, worthless crap?

Yeah, add this one more threat onto the pile of "Look what will happen to you, you @#, if you're not able to steal four more years!". Take an immoral pile of pure @# and threaten him with all the reality he’ll suffer if he doesn’t commit yet one more crime, then compute the odds about what he’ll do next. If we get out of this mess without him dropping a bomb on Iran just for distraction i’m afraid we can count our lucky stars. (“The military will never side with him!”[salutes] man, i hope you’re right) -sigh-

Just the cash. If Trump pays off the loan to DB, seize the funds directly.

I don’t care. If Biden wins I plan on never clicking another article with word Trump in it again. For real.

He may already be working on raising the cash…

"If Vornado refinances 1290 Avenue of the Americas and 555 California Street and borrows roughly 50% of the value of the assets, that would take care of the debt on those properties and allow the president to extract an estimated $50 million of additional cash. He could also refinance 40 Wall Street, again at 50%, and probably pull out another $60 million. In 2017, Trump paid off bonds against 6 East 57th Street in midtown Manhattan. Since that building is worth an estimated $179 million, he could presumably secure a new, $90 million loan against it without much trouble.

Then there are the vanity assets. Mar-a-Lago has no debt against it, so Trump could probably sell the Florida club and clear another $180 million before taxes. He could still retire at one of his other three houses in Palm Beach. If he got rid of his planes and helicopters, that would probably provide another $24 million or so. He could ditch his penthouse in New York City for an estimated $45 million. The winery in Virginia might go for $30 million. His home in St. Martin could probably fetch $12 million. And a mansion in New York, named Seven Springs, could trade for $30 million.

First son Eric Trump, who is handling day-to-day management of the business while Donald Trump serves as president, is staying positive—and employing a bit of Trumpian exaggeration. “We remain seriously underleveraged and maintain very low levels of debt,” he said in a statement.

Meanwhile, the selloff may already be under way. From 2017 to 2019, the president generated an estimated $118 million by dealing various properties. The St. Martin home is currently listed for sale, and the Wall Street Journal reported Thursday that the Trump Organization is considering selling Seven Springs as well. In all, refinancing and selling the aforementioned assets would seemingly free up close to $1 billion, enough to cover Trump’s looming debts. With every new deal, however, there would be additional questions about conflicts. Did a bank finance a certain loan because it believed in the transaction, or because it wanted to curry favor with Trump? Did the buyers really want to own those properties, or were they just looking to put millions in the president’s pocket?"

Recuperate = to get better after an illness, injury, or exertion.
Recoup = to regain (something lost or expended).
Recouperate = ??