Review: Anker's PowerHouse is a beefy brickful of electrons

The Rebel State of California thanks you, the apocalypse cometh.

Hmmm. I think I’d prefer a real UPS for keeping things going in a power cut or running appliances away from the mains - automatic switchover, replaceable batteries, fairly serviceable, and if you buy the right UPS, expandable with as many batteries as you want. I’ve lugged an old APC Back-UPS with me to the middle of nowhere before - 550w output, though nowhere near the battery life.

Whats the inverter like on it - Pure Sine? If not, I would be careful running anything with AC motors or that cares about power quality.

One of the reviews had an oscilloscope plot which showed that it produces very clean sine-wave power, so they at least didn’t chintz out on the inverter.

Unfortunately, Anker decided to follow the “make it disposable” trend and not make the batteries user-serviceable. To me, that’s a deal-killer, right then and there, no matter how good the unit might be otherwise.

Edit: I like the UPS idea. I have an old Smart-UPS that has been through multiple battery changes over the years. Yeah, batteries aren’t cheap, but it still costs far less than a new UPS.

Looks nice - and the battery will probably last quite a while longer than my set up.
I use one of those emergency car starters that has a motorcycle battery inside & have an inverter at home should I need emergency power. Not sure how it stacks up for capacity to this - but it has 7 amp hours. I’ve run a small flat screen TV and an LED light on it for an evening in a pinch. The starter was on sale for $40 - the inverter I bought so many years ago - I have no idea.

Sounds like a simple portable solution. If portability is not crucial, then for that kind of investment it’s worth looking into options that would involve an inverter, bigger batteries (more capacity, though heavier and likely cheaper) and perhaps solar panels as a recharging option.
That’s a comment as someone working in an area with unreliable electricity, where it makes a huge difference to just be able to keep on working for several hours when the power goes out, before having to worry about starting the generator.

I looked at it for ~10 seconds then I thought “made in China”.

The Rebel State of California thanks you, the apocalypse cometh.

We got serious wind farms up the ying yang:

Why do people insist on giving specs on something like this in thousands of milliamp hours? a) they could have easily said 120 Ah which would have made some sense but b) amp hours is only useful when coupled with the voltage which isn’t given. The specs/review are clearly by someone who doesn’t know anything about the subject, just that big numbers are probably good. At least the Amazon description lists 400 watt hours which is a meaningful number.

No kidding - I just finished charging a cousin of that. I have a pellet stove, and in the winter I need the fan to stay on and blow the heat into my house. It works brilliantly, except when the power goes out for 6-8 hours. I also have an electric well (shallow draw) and I’d be willing to see how well it works on that system if the power is out too long, too. 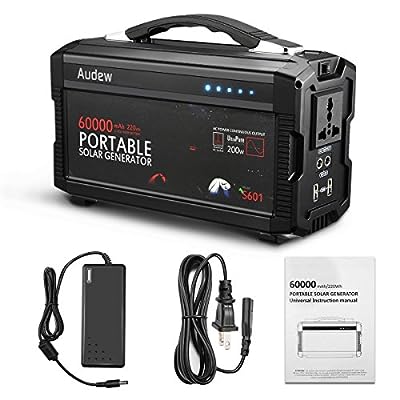 Just bought my second Anker product, the first were replacement batteries for my Note 4 (why it’s still superior to any Note since.) and I was so pleased by the lack of excessive issues (the only real barometer for modern manufactured products) that about 40 days ago I bought the Anker SoundCore XL for about 70 dollars. Same 18 month warranty as the future cautionary tale this post is about. It stopped taking a charge about a week ago. Couple times a day I stop where it’s supposed to be charging, unplug it. Plug it back in, crossing my fingers that the warm and consoling glow of the charging indicator led will bathe my consumer-oriented existential crisis in the sweet, sweet security of quality-workmanship, rather than the saccharine-coated spell-of-misdirection that constitutes the legalese of the “worry-free” warranty. Even my lack of experience deciphering legal jargon couldn’t hide the fact that the warranty is expressly written to remove Anker’s worries about getting sued for releasing beautifully polished piles of electronic crap.

I highly recommend building whatever you need yourself, or get stuck in the potentially endless Amazon Product Return-Loop of Insanity.