Robot fish and the dawn of "soft robots"

“As robots penetrate the physical world”, instead of populating the worlds of legend and dreams.

That robot fish is the first indication that navies as currently defined are going to be obsolete within a decade or two.

A carrier group could be obliterated by a few thousand (or tens of thousands, given the relative cost) of those cheap little things filled with explosives swimming up to them, attaching and blowing up in a coordinated blast. They could even be programmed to float around on the surface with pv cells until needed, possibly even radar invisible.

I saw one of these fish at the University of Arizona. It was a senior project. Very impressive design.

They inhabit the stream that flows through the Uncanny Valley.

I heard a talk last year by George Whitesides, who has managed to shift the focus of his research from organic chemistry to soft robotics. He showed a couple of great videos of soft robots doing things that hard ones can’t.
Here’s one picking up an egg, for instance:

They also show that the robots can survive being hit with a hammer with no damage. Of course, that applies only to the soft parts of the robots, not to the hard mechanical pump that actuates them…

So with the rapidly increasing development and ubiquity of drones and robots in our lives, far outpacing the necessary regulations to along with them, are there also people out there developing effective countermeasures for those of us that might want or need to terminate these things? Some sort of EMP blaster to disable their electronics? Or net launcher to snap them out of the sky or water? I assume that personal smart-rocket launchers are not going to be possible for most of us…

So, who is making “soft” weapons to fight this looming automated scourge? I already know drones and robots are being developed, I don’t hear anything about the response technologies. THAT is what I’d like to know more about.

Just reading between the lines…

made of silicone that is actuated by fluid flowing through veins

As robots penetrate the physical world

they could be destroyed by predatory fish while in open water. (it looks like a fancy lure)

…no danger if they whack you…

I actually saw, 15 years ago, the exact same thing (bar any very clever new software) demo’d at a Japan tech expo in London. I was amazed I didn’t see more of it - the applications are so evident. Like picking fruit.

It’s inevitable really. When they can pass the Turing test, they’ll monopolise the males.

“As robots penetrate people and start interacting with the physical world more and more, it’s much easier to make robots safe if their bodies are so wonderfully soft that there’s no danger if you whack with them," I FTFY

cause that there is sex tech if I ever saw it, what else as important as robots is actuated in that way?

edit - I see this has been covered already, I bet the patents are already filed too. “Hey baby, check this out, up, down, up, down, up, down all with the flick of a switch, also comes with a clapper & an app that lets Siri operate it for you, at your command.”

Or rival school of robofish at a dance showdown at the bottom of the uncanny sea. 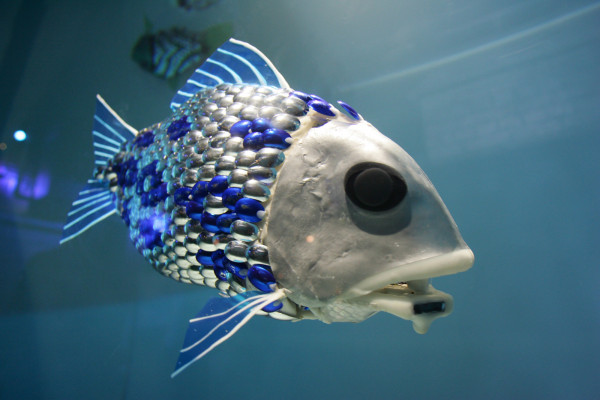 Meera -   For this week's Naked Engineering, Dave and I are looking into the field of biomimicry.  This is a mimicking of biological organisms for their structures or their movements and this week Dave, we're looking into fish.

It is not obvious that they need to pass the turing test, at least for a significant fraction of males.

Initially read they as “robotic lecturers.” Then was disappointed.

I had one of those too.

Indeed. Can WE all pass the Turing test?