Runner literally flies across the finish line to win race

The trick to flying is to miss the ground.

I was a swimmer.

I was a swimmer too. Long distance. Definitely not very coordinated.

I was going through the pockets of an old coat last night and found two joints. I had to duck, else I hit my head on the ceiling as I flew.

One foot on the ground at all times

Then you can’t run. I get your intent though, crossing the line should only count if you’re actually on your feet. In short track speed skating it’s when the tip of the skate crosses the line. That’s a little more difficult in track since ideally you’re not sliding on the track surface.

Tell all that to that horse.

going through the pockets of an old coat last night

So, the goat didn’t mind?

Guy is ALL the Tucker.

I’m a Capricorn, so good on the goat and fish fronts.

It’s not against the rules. Nor should it be.
Reasons:

I don’t see any reason why this “ought” to be illegal.

Same here. It’s not like it’s bodyline which, while being technically legal, caused injuries to other cricket players. 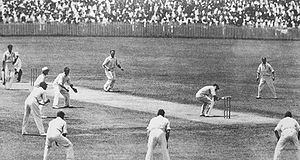 Bodyline, also known as fast leg theory bowling, was a cricketing tactic devised by the English cricket team for their 1932–33 Ashes tour of Australia, specifically to combat the extraordinary batting skill of Australia's Don Bradman. A bodyline delivery was one where the cricket ball was bowled at the body of the batsman, in the hope that when he defended himself with his bat, a resulting deflection could be caught by one of several fielders standing close by. Critics considered the tactic in...

I assume you’re referring to the Kentucky Derby?

I don’t know much about horse racing, but if that had been a track meet and the lead runner had wandered all over multiple lanes and impeded other runners, hell yeah they’d be disqualified.

The runner who crosses the line with their head first wins

Very minor nitpick, but it’s the torso, not the head.

Interestingly, in the Palio in Siena, it’s the horse’s ornamental feather that is the thing that must cross the finish line, by the rules. This means that if the feather were to fall off, the horse would not be able to win, but also, more importantly, there is no requirement that the rider must be on the horse. This has led to jockeys occasionally leaping off their horses to give the horse a final, weightless advantage (while the jockey tries not to get trampled to death).

Yeah, I was talking about the Derby. I don’t know anything about anytime of racing but that horse changing lanes didn’t seem very

Unfortunately, there aren’t painted lanes in horse racing like there is in track, but there were visible grooming lanes. Maximum Security went from the rail to lane 3 then back despite a competing horse that was chest-to-whithers on its outside. That was pretty obvious.

I think this was partially out of need – I think he starting going off balance forward and this was the only way to do it and win.

And can you imagine if he had mis-judged that and landed a few inches shy of the line?? Painful in more ways that one!