Russian recruitment officer in intensive care after draftee shoots him

Silly draftee doesn’t know defenestration is the only acceptable way to deal with troublesome public officials in Russia.

With Mr. Putin having in effect outlawed dissent against the war, attacks against draft offices have risen since Russia’s invasion began. At least 54 recruitment centers and administrative buildings have been set on fire since then, according to Mediazona, an independent Russian news outlet. Seventeen attacks have occurred since the call-up was announced last Wednesday.(https://www.nytimes.com/live/2022/09/26/world/russia-ukraine-war-news?smid=url-share#a-recruitment-officer-was-wounded-in-the-shooting-in-siberia)

It isn’t called war for nothing.

They were probably on the ground floor so had to improvise.

They were probably on the ground floor so had to improvise.

In Russia, you can still suffer fatal injuries from falling out a ground floor window – if you annoy the right people.

“He fall out basement window. In Russia, basement very dangerous.”

They ever try a draft here I’ll be sharing this, thanks

I’ve heard of getting blown away by a draft, but this is ridiculous.

Almost word for word what I was going to say. “Defenestration” is a fun word.

Reading about the response by the Russian people to the new enlistment policies, I keep thinking… 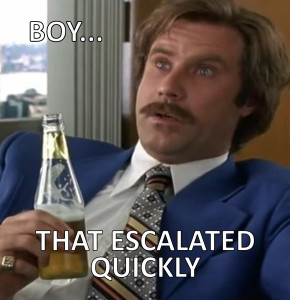 It feels like almost instantly people were clashing with police, blockading roads, and now shooting recruiters… I guess when you punish any kind of dissent, that’s what happens - there’s no point in holding back.

Apparently at least some people are aware that’s what they’ll be. I wonder just how many know that they’ll literally get a few days training and then get sent to the front lines (where they’ll be given a rusty AK-47 and… that’s about it). The whole thing is insane.

…a Russian man opening fire and killing the military commandant in a draft centre in the city of Úst-Ilimsk in Irkutsk region.

“And how we burned in the camps later, thinking: What would things have been like if every Security operative, when he went out at night to make an arrest, had been uncertain whether he would return alive and had to say good-bye to his family?

Or if, during periods of mass arrests, as for example in Leningrad, when they arrested a quarter of the entire city, people had not simply sat there in their lairs, paling with terror at every bang of the downstairs door and at every step on the staircase, but had understood they had nothing left to lose and had boldly set up in the downstairs hall an ambush of half a dozen people with axes, hammers, pokers, or whatever else was at hand?

The Organs would very quickly have suffered a shortage of officers and transport and, notwithstanding all of Stalin’s thirst, the cursed machine would have ground to a halt! If…if…We didn’t love freedom enough.

And even more – we had no awareness of the real situation…. We purely and simply deserved everything that happened afterward.”
― Aleksandr I. Solzhenitsyn
The Gulag Archipelago

To be fair, he was only one guy. The FSB usually has two or three big guys to help people accidentally fall out of windows.

Almost word for word what I was going to say. “Defenestration” is a fun word.

A friend of mine considered using it in a police report, but he decided not to because he already had a reputation as an oversmart college-boy.