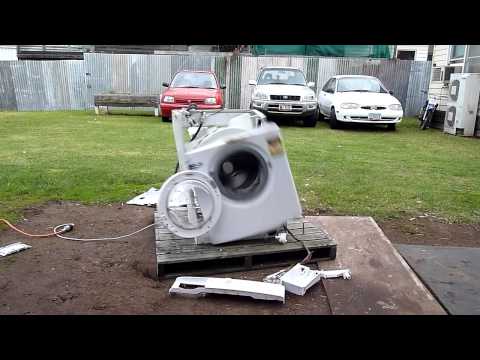 You might even call it a cycle… OF REVENGE!

Sounds like Samsung really wants to get back into the defense industry. Which they should. Explodey things for people what wants explodey things, says I, and none else!

Do no mod these into GTA guys. Samsung has thin skin.

Well it’s clear that all we have to do is find out precisely which fire god is angry with Sampsung and appease them.

“The rise of the machines has begun”.

Time for Danger Mouse to get back into action!

Jesus, the phones and now this?

WHAT A TIME TO BE ALIVE

The IoT of Shit, phones that explode, and now washing machines.

I’m wondering if Samsung has anything to do with airbags. No, wait, those are supposed to explode…

I was pretty sure they would be, being a huge Korean technology company and I found this:

1977; 41 years ago (1977) (as Samsung Techwin) Hanwha Techwin (Korean: 한화테크윈), founded as Samsung Techwin, is a surveillance, aeronautics, optoelectronics, automations and weapons technology company. It is a subsidiary of Hanwha Group. The company employs 4,501 people and is headquartered in South Korea. Its totals sales in 2014 were 2,615 billion South Korean won.

If this were any other company than Samsung, this wouldn’t even be a blip on the radar.

I think you forgot to capitalise this superhero sidekick’s name.

They were. Samsung Electronics sold its interest in Samsung Techwin to the Hanwha Group in 2014; the takeover was finalized last year and the name changed just this past March.

Then shit started blowing up.