really? smoking, even e-smoking? promotes cancer? GTFO! Who would have thought? i mean, it totally has to be safe. the advertisers say so

I don’t want to live in a world where if something is not required then it shall be forbidden. I don’t have the wealth that that justice requires.

No matter what chemicals you cut out, you still need nicotine to be present, and nicotine itself has been identified as a carcinogen. http://www.wjgnet.com/1007-9327/full/v12/i46/7428.htm

Health effects aside my real problem with e-cigarettes is I can’t call up a store and ask, “Do you have Sir Walter Raleigh in a vape?”

No. You don’t need to have nicotine present. Many vapers use 0 nicotine juice.

From what I understand, nicotine is not carcinogenic, but it can cause cancer tumors to grow faster.

Regardless, they are much safer than analogs and every smoker who switches is one less person smoking.

What part of tobacco smoke do you think causes cancer?

that’s what i don’t understand about this.

e-cigarettes aren’t some weird new black box that fell out of the sky. vaping fluid is a combination of propylene glycol; vegetable glycerin; nicotine; flavorings/colorants; whatever other nasty shit the anonymous Chinese factory may have put in.

haven’t we studied the hell out of each of those things, none of which magically react with the others to make things worse? it seems that the reasonable plan would be to regulate fluid imports for impurities, and maybe to ban or label flavorings which are tobacco-extracted.

Nicotine is a deadly poison. Everyone knows this. (Almost everything is actually, provided the dosage is high enough: water, oxygen, fluffy baby rabbits etc)

Cigarettes are bona fide mass-mass murderers; yet those who imagine that e-cigs are harmless have to be fooling themselves. However…in my own personal experience: I have to give a thumbs-up to this new technology. My fiancé has been a smoker all her adult life; hardly a chimney…but three a day, morning, noon, night. I don’t have a problem with that per se: our first time alone was to share a smoke break together…but I can take it or leave it. She Has To Have It…and our society, on the West Side, permissive as it may be about some things…is down on the smoke blowers.

So…she has embraced this new tech. The pluses: zero fire danger. No ‘tar’ with the free radicals of combustion all up in her lungs. Less lingering stink in car and home.

The negatives: well…that remains to be seen, doesn’t it. This morning she took four hits and I yelled “Hey! Three is enough!” But…what do I know? How much is ‘too much’? I have no idea.

If you are concerned about ingredients, you can simply mix your own. All the ingredient available online from reputable labs.

yeah, i know. i’m talking about what would be a good general public policy for harm minimization.

As a vaper, I support all the above regulations.

However…in my own personal experience: I have to give a thumbs-up to this new technology.

For people who would otherwise be smoking cigarettes: YUP. I agree totally. But I think it’s worth digging more into this scientifically, and figuring out what effect the second-hand e-vapor has, because even if this is a healthier choice for smokers, that’s a different risk/benefit analysis for people who wouldn’t have chosen to smoke at all. Basically, if we believe that it’s reasonable to ban smoking in restaurants and bars (which, frankly, I do), and if e-cigarette vapor is shown to be a cancer risk to people who aren’t actively choosing to smoke it, then e-cigarettes should fall under the same bans as regular cigarettes. And, right now, they don’t.

In Canada e-cigs are not allowed to have nicotine.

There has never been a study to show any danger to “second hand vapor”. The vapor is propylene glycol (used in asthma inhalers), water, and a trace amount of flavor and nicotine. When I say “trace” I mean trace, too. Not enough to affect anyone.

Not to rule out any and all danger, but so far research has not shown any.

Does anyone remember the e-cigs of the 70s, I remember hearing about them as a cigarette better suited to airplanes. Then they disappeared. I am frankly surprised that RJR and Phillip Morris do not have enough regulatory capture to keep the e-cigs out of the market from the beginning.
In oligarchy America regulation often means less real regulation and more freedom for companies than fearing new uncaptured regulation. The classic case is the Goldman/Fed revolving door.
It will probably turn out that e-cigs are not a major cancer risk something akin to coffee but there is much remaining smoker hate that could be aimed at vapers as these become more popular.

Historically, nicotine has not been regarded as a carcinogen.[65] The IARC
has not evaluated nicotine in its standalone form or assigned it to an
official carcinogen group. While no epidemiological evidence supports
that nicotine alone acts as a carcinogen in the formation of human
cancer, research over the last decade has identified nicotine’s carcinogenic potential in animal models and cell culture.[66][67] Nicotine has been noted to directly cause cancer through a number of different mechanisms such as the activation of MAP Kinases.[68] Indirectly, nicotine increases cholinergic signalling (and adrenergic signalling in the case of colon cancer[69]), thereby impeding apoptosis (programmed cell death), promoting tumor growth, and activating growth factors and cellular mitogenic factors such as 5-LOX, and EGF. Nicotine also promotes cancer growth by stimulating angiogenesis and neovascularization.[70][71] In one study, nicotine administered to mice with tumors caused increases in tumor size (twofold increase), metastasis (nine-fold increase), and tumor recurrence (threefold increase).[72] N-Nitrosonornicotine (NNN), classified by the IARC as a Group 1 carcinogen, is produced endogenously from nitrite in saliva and nicotine. 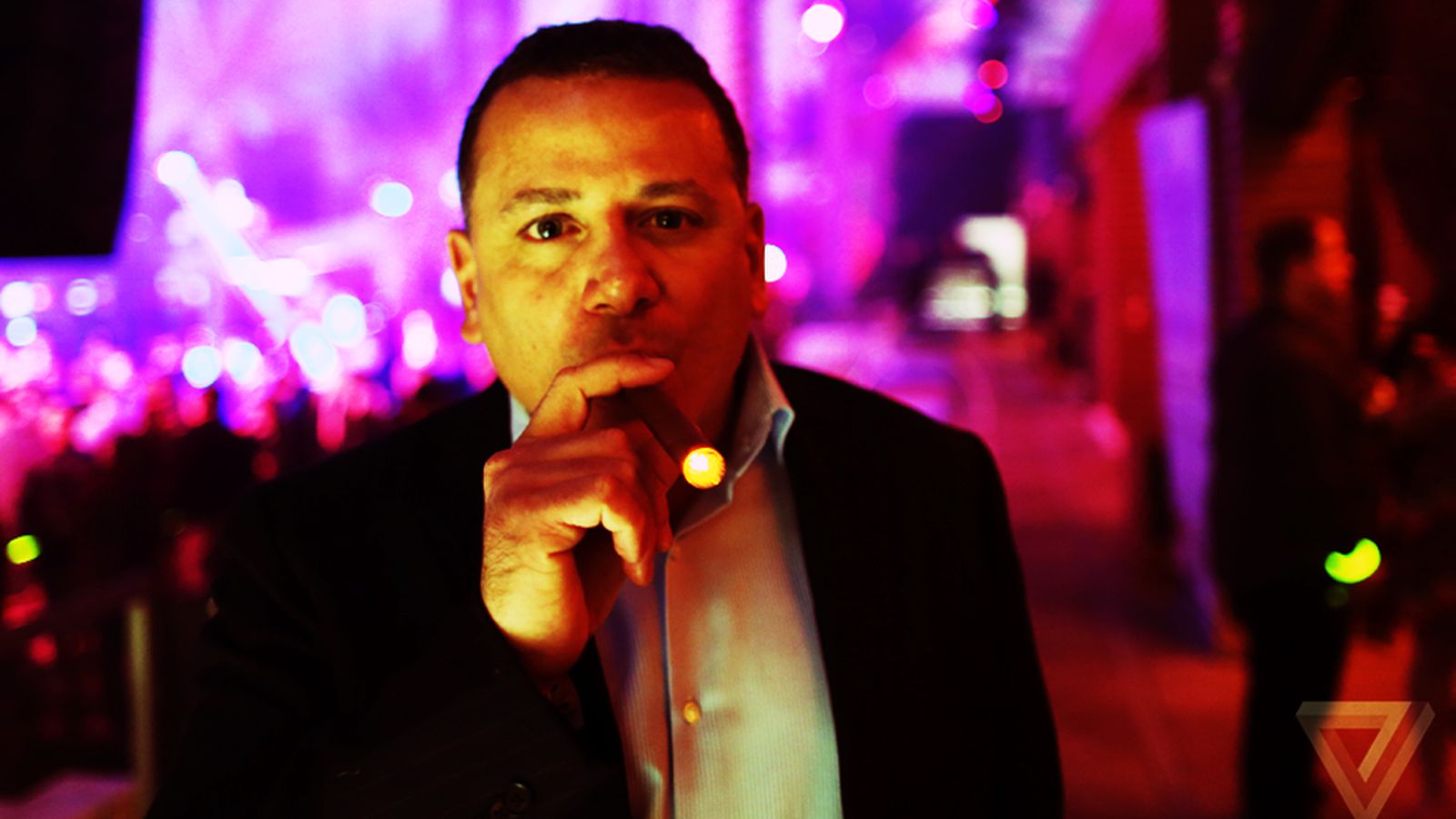 Circuit vapers: the e-cig is getting an upgrade

The pool deck at the Marquee, a $1,500 bottle-service club at the Cosmopolitan hotel, is lined by cabanas heated by lamps and jacuzzis with walls made of plexiglass. On the first night of CES, the...

RJ Reynolds isn’t the only big tobacco company betting on e-cigs.
Lorillard, which owns Newport, acquired the Blu brand in April of 2012.
Altria, which owns Philip Morris, joined the party this summer with its
MarkTen line of e-cigs

Then what’s the point? Nicotine is the active drug in tobacco.

Two quick points: First is that anytime you read someone using phrases like ‘smoking ecigs’ or ‘ecig smoke’ it is a pretty solid indication of bias against ecigs in general. Electronic cigarettes have no smoke. That is the whole point. They have a pretty benign vapor of propylene glycol (which, as was mentioned above, is used in asthma inhalers and many other things, and has a lot of true medical studies regarding its use), with trace amounts of nicotine and flavoring.

Second, for those who think that nicotine is pure evil, even in the tiniest amounts, well I hope you never eat tomatoes, potatoes or eggplant as they all contain nicotine. In fact you are ingesting significantly more nicotine in an eggplant dish that you would from breathing the second hand vapor from an ecig. http://www.huffingtonpost.com/2012/06/15/nicotine-in-vegetables_n_1597087.html (In that article they mention that 10 grams of eggplant has the nicotine equivalent to 3 hours of second hand smoke.) Nicotine has a pretty well understood effect on the body, although many studies look at inhaled smoke as the mechanism for intake. Without smoke, nicotine is about on par with caffeine as far as its harmfulness. (A side note, there is also something about how Americans process some tobaccos that make them worse for you. For instance American chewing tobaccos are really bad for you, and are known to cause some horrific mouth cancers, yet Swedish snus (which is prepared with just tobacco, water and salt) does not, or at a much reduced rate. Sweden has the lowest cancer rates in Europe, in part because Swedes use snus instead of smoking.)

I should point out that I no longer have a horse in this race. I smoked off and on for years and years, and also used snuff (the old fashioned nasal variety) and snus (the swedish oral kind). I switched to ecigs about 2 years ago, found them delightful, and cut all the other actual tobacco forms out of my life. Then sometime around last Nov., after tapering my nicotine content down gradually in the ecigs, I cut them out too. Ecigs are amazing. Period. (Although not all are created equal. As with most things, do some research and buy quality, both in equipment and in juices. There are a lot of excellent resources out there (forums and such) to help point you in the right direction and away from crap like ‘blu’.)