Scott Pruitt quits EPA after corruption exposed by staffers. His resignation letter to Trump is bonkers

The truth about his resignation letter with all the talk of “service”…It’s a cookbook!

Scott, Trump is not the Emperor of Mankind and you are not one of those Spacema errrr SpaceForce Primarchs, not even close.

Relax, take a vacation in california, get som recreational weed … and pull your head out of the orange guinea pigs behind. You quit, its a resignation letter and not an Jobinterview with the Spacepope himself (Bob be praised).

For example, we’re supposed to be stewards of the land, taking care of it. Not laying waste to it.

But, but, Jesus! He’s waiting! It’s rude to keep someone waiting!

Millenarianism (also millenarism), from Latin mīllēnārius "containing a thousand", is the belief by a religious, social, or political group or movement in a coming major transformation of society, after which all things will be changed.[citation needed] Millenarianism exists in many cultures and religions. The terms "millenarianism" and "millennialism" are sometimes used interchangeably, but this usage is incorrect. As Stephen Jay Gould notes:

I prefer the blanket shorthand term “Xtianists” myself. It both makes a distinction from Christians (including some evangelicals) who do try to adhere to the progressive precepts of the religion while also reflecting the fact that Pruitt and his ilk (including ultramontane Catholics and the shriveled husks running the LDS Church in addition to the Prosperity Gospel hucksters and Falwell-style Evangelicals) belong more to a right-wing political movement than they do to a religious one.

And it wouldn’t be a thing if it didn’t work often enough to be a thing.

Pruitt isn’t a malevolent mastermind. He’s a spoiled child who has managed to become an old man without ever once being held responsible for his infantile narcissism. He still ought to be thrown under the jail, but he’s also just completely pathetic. Nobody that age should be writing a letter like that.

He’s buttering Trump up in anticipation of needing a pardon, and Trump’s exactly the rich, weak pushover parent to give it to him.

I see it as buttering up Trump because it has always worked in the past. Suck up and shit down only gets you SO far. Of course now he’ll get a very well paid job as a lobbyist for some energy company. One of them will give him his reward, and they are going to deserve the hell of putting up with his inflated ego and narcissism.

The American people are the Trump-brand used mattress. Very used.

Yeah, it’s amazing how these screaming christofascist wackos can combine their corruption with JESUS.

Sounded more like a Renfield worshiping his master vampire. He definitely had Trump’s balls firmly in his mouth, you could almost hear the “POP!” when he pulled them out. I think he’s seriously hurting, thinking that he won’t get to give Drumpf another rim job very soon, so he’s lining things up for afterwards. On a positive note, maybe they can enjoy each other later as cell-mates.

So now he’s trying to blame God for allowing despicable shitheads to have positions of power? 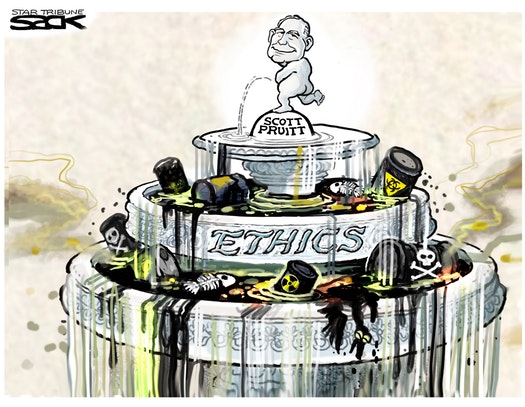 A fine example of why politicians like unquestioning and devoted religious people serving them. These people put blind obedience and religion above their government job of serving the people for the greatest good.

Racism played more into when Obama was in office, but the vitriol for the Clintons, as an example, isn’t race based.

so i have to wonder why you’re bringing up attacks against them here.

Or if you read the article, you can see that it’s probably more to do with the mulit-billion dollar baby food industries in the US lobbying against this measure in the WHO.

But you keep posting these off-topic discussions in this thread. In fact, this is already up over here:

A round up of Trumpian events

If you want to comment on this, go there and join the discussion instead of continuing to derail this thread.