Look - a girl’s gotta take care of her skin if she’s going to wallow in the swamp all day long.

It rubs the lotion on its skin or else it gets the hose again. 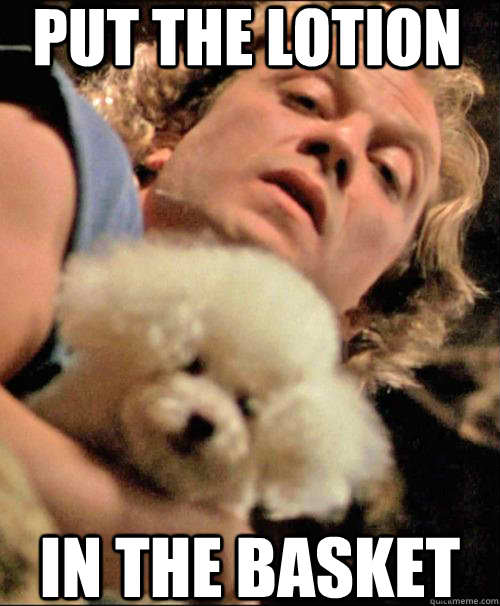 Maybe he wants to get the hose again?

This jerkoff and his give away s to big oil, exempting them from having to buy RINs cost me $52K last month alone. In a company of 8 people, that’s a lot of income we won’t get, and it threatens our existence. I hope he drowns in his f%(*ing lotion.

This sort of abuse of taxpayer funded staff is pretty common among high flying politicos. I just can’t get past the weirdness of the “used mattress” story, it really makes no sense.
1.) Is he so stupid that he doesn’t realize that a brand new hotel is not going to have any used mattresses sitting around?
2.) It is strange for him to hit up his boss’s private business for a freebie.
3.) Would anybody who is not desperate want a mattress that a hotel had decided was too funky to keep?
4.) Good lord, he makes a good salary, is he so cheap that he can’t spring for his own mattress?
I have a sneaking suspicion that this is some sort of cover for a story that makes him look even worse.

I think it’s important to see just how corrupt these people truly are. If it’s this bad with such petty bullshit the big stuff must be incomprehensible.

The temptation to have people get you food, or help with a family investment make sense. He’s probably busy and justifies it to himself as a better use of his time (even if he should just get a personal assistant in that case).

The Mattress/Lotion thing though makes it sound like he has oodles of time to cruise around DC looking for free stuff. Weird, weird, weird.

…different hotels in a desperate search for a certain kind of special moisturizer he is fond of and is available at Ritz-Carltons.

In a soundproof booth, no one can hear you moisturize.

I think the thing about Pruitt is that he views the role of his position through the lens of his eschatology. He WANTS to waste money because it bleeds the beast (to borrow from the LDS) and brings us closer to the rapture.

3.) Would anybody who is not desperate want a mattress that a hotel had decided was too funky to keep?

Apparently yes; the big boss where I work has an in at a nearby resort that was being renovated, so we all got an email a few months ago telling us that we could show up at the hotel’s loading dock with $50 cash and drive off with a queen sized mattress.

4.) Good lord, he makes a good salary, is he so cheap that he can’t spring for his own mattress?

I wonder if this is one of those “this is how rich people stay rich”-type stories we get every now and then, like Elon and his shitty couch, or Trump and his refusal to pay the people who work for him.

I mean, how hard is it to look in the Free section on Craigslist?

Would someone kindly get the man a membership to Sams Club or Costco so he can buy his tchochkes in bulk? If you like protein bars, how hard is it to keep a case of your favorites in the fridge?

Scott Pruitt is hilariously corrupt, but sending gophers out to get him snacks doesn’t seems like it fits the bill. The wording of the writeup is tremendously overblown, edging into purple prose at points.

I’ll bet the manufacturer of the lotion is terrified over being outed. Sales would tank. It might even spell the death of the company.

I mean seriously. Settle down frauenfelder.

I’m sure his assistants didn’t think that they’d be glorified gophers when they took the job, but that’s been true of assistants throughout history. Lets stay focused on his actual corruption an ethical failings.

Pruitt is a lotion huffer, FACT!