Originally published at: Seakeeper stops "hole in the water you throw money into" from rolling around | Boing Boing

Every boat owner I’ve known gleefully co-signs on the statement: “a boat is a hole in the water you throw money into”

That’s because most boat people make poor purchasing decisions. After scouring Craigslist for weeks I bought a nice little 14’ sailboat with trailer for $900 several years ago, and have hardly spent a penny on it since. No motor to maintain and the whole thing is cheap enough that if a major repair is ever required that I can’t do myself I can just sell or scrap it and get another old boat for cheap. I definitely got my money’s worth already.

But yeah, most people with motorboats would be far better off financially if they just rented one a few weekends a year.

I’ve seen these in yacht videos, because I watch yacht videos on youtube. In another life, I’d probably live aboard some sort of adventure/trawler yacht. (I actually dislike ostentatious modern-architecture superyachts; I’m more the classic teak inside and ‘can go anywhere without breaking down because it’s high quality’ type of fictitious yacht person.)

The price tag for diesel fueling is a bit much to stomach though - somewhere around 30 grand for a full fill-up on say a Nordhavn 70ft trawler.

The price tag for diesel fueling is a bit much to stomach though - somewhere around 30 grand for a full fill-up on say a Nordhavn 70ft trawler.

70 ft is a big boat. The shorter ones look more affordable. Presumably the engines are less thirsty too.

For $16K, the people on my boat can just adjust to the motion and deal with it.

Heck you could prolly get $500 or more just for the trailer.

The last time I was tempted was after watching an AquaNaut Boat video. After watching the Seakeeper video, I wondered how much one weighs. First search result was 365 lbs…for the small one.

I had this solved when I was eight years old.

You put a heavy steel ball in the bottom of your boat. On both sides are strong retractable magnets. When the boat tilts to port, gravity pulls the port magnet into a recess, causing it to release its hold on the ball. At the same time, the starboard magnet falls out of its recess and pulls the ball to starboard thereby counteracting the lean.

This only works with V or round hulls.

But yeah, most people with motorboats would be far better off financially if they just rented one a few weekends a year.

It depends on what you get, what you use it for/how often you sue it, and how long you have had it.

My dad has 2 aluminum hulled boats for fishing, one larger and one smaller, based on which lake he goes to (the bigger one is too large and has too large of an engine for the local city lake).

But he bought them used, keeps them maintained and covered when not in use, and they aren’t fancy bass boats to begin with, so he has gotten his money’s worth out of it.

Conversely I have seen people with bass boats that cost more than most cars, $300 worth of tackle boxes, and they manage to drive off the dock in the truck trying to back in, requiring a tow.

The gyroscope concept initially struck me as cool as fuck, but, once I began reflecting upon my experience with large ships and small boats in various sea states, I started feeling skeptical.

I don’t doubt that the gyroscope “can” provide the needed stability to avoid seasickness when a boat is not underway–correcting for roll and pitch. However, when I imagine a boat moving at speed through any substantial level of seas, I start seeing a gyro-fixed boat wanting to stay fixed to some kind of X/Y/Z orientation to Space. So, instead of the shape of the bow and hull carrying the boat over a wave, I see it digging in instead and “duck diving” through a wave like how surfers dip their boards to get carried through out the back.

With the extra 350lbs of metal bolted to the deck, that could be a one-way trip to the happy fishing grounds.

BTW, I haven’t visited their website for info addressing this issue.

i’m throwing money into my hole in the water right now!
annual service on my outboard runs around $1200US, parts and labor and they make house calls.
as for this “Seakeeper” device… what? are you new? 3-4 foot swells are common on the reef here and it can get a bit “sporty” out there for a 20ft boat. look at the horizon and chew on ginger candies if the tumtum is queasy. be sure to heave over the gunwale, you’ll chum the water and i can catch more fish!
now sit down and pass me another beer!

However, when I imagine a boat moving at speed through any substantial level of seas, I start seeing a gyro-fixed boat wanting to stay fixed to some kind of X/Y/Z orientation to Space.

so does vertical heave.

I always thought that was the by-product. /s

Came here to say this…most commonly seasickness is due to the up/down motion (heaving) of the waves and the affect that has on balance in the inner ear and not necessarily because of the side to side rolling. It’s why focusing on the horizon while getting as high up as possible is a way to counteract the worse effects of seasickness while on the water. 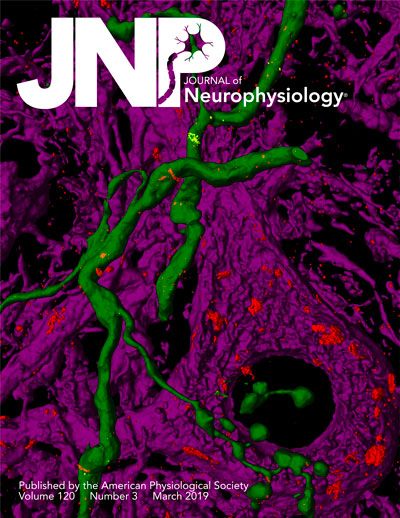 The neural basis of motion sickness | Journal of Neurophysiology

Although motion of the head and body has been suspected or known as the provocative cause for the production of motion sickness for centuries, it is only within the last 20 yr that the source of the signal generating motion sickness and its neural...

So, what’s cheaper:
A bucket of chum, or a bag o’ burgers?

ISTR that one of the old trans-Atlantic oceanliners had gyroscopically controlled fins in the bow to reduce the motion of the ship from waves. They quietly turned it off and then removed it after the first few crossings because it made the ship slam hard and loud into the waves rather than over them.

I will testify to “vertical heave.” The one and only time I ever tossed chunks was on a research ship that had to slow to 3 knots in seas off of Yakutat (great name, no?), Alaska. I just had a lunch of teriyaki (another great name, no?) flank steak washed down with orange juice. Made it up forward to the bridge where the ship’s pitching action could really be felt. Tried breathing through my nose to use my diaphragm to keep my stomach from moving vertical so much. It felt like my gut was getting forcibly pumped. Ended up excusing myself to go to the head to lighten my load. Felt much better and could stand the rest of my 4-hour helm watch.

Oddly, in the previous few times I ever felt sea sick, I felt a queasiness in my head. This time, maybe it was more in my gut as slightly in my head? Dunno. Haven’t had issue since that day. Probably because of the much larger ships I’ve been on.

Sounds like you chose the wrong research ship. Apparently this one is quite stable, once it’s in position: 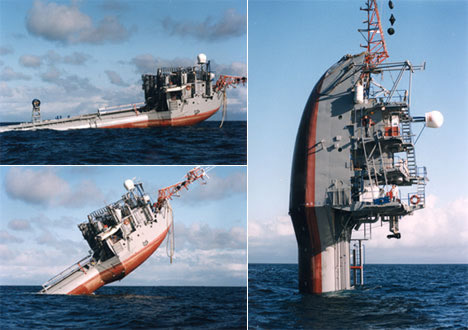 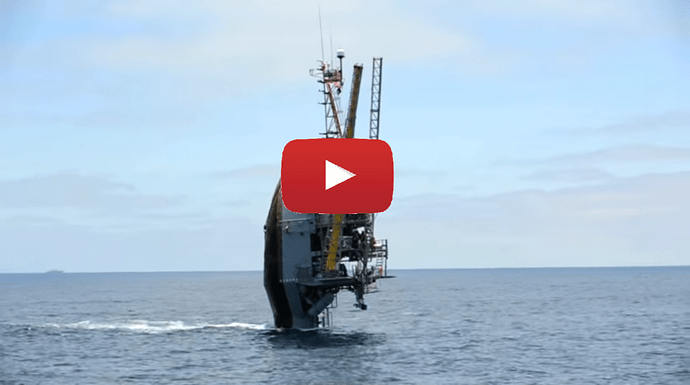 Rp Flip: the ship which sinks under the water to study waves

A ship standing vertically in the middle of the ocean? Don't panic, it's not one of the most dramatic sea accidents in boating history

I grew up in Wichita, Kansas. The closest I ever got to big waves was the water park across town.