More mysterious: Sometimes you’ll get a soda with three quarters taped to the bottom of the can. Free soda!

Just up the street from the Mystery coke machine is the Metrix vending machine. 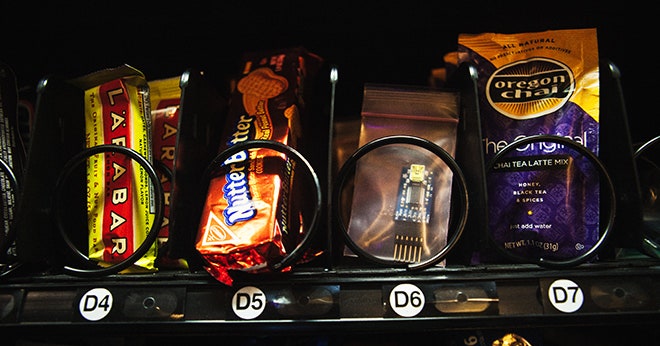 Visitors to Metrix Create:Space in Seattle can avail themselves of the hacker space’s many amenities: 3-D printers, work benches, hand tools, power tools, oscilloscopes, and 50 Mbps internet. If you need something more than that for your project,...

There’s a Pepsi vending machine about 10 miles out in the country near my town. I don’t want to know any more about it, but the last time I stopped a Pepsi cost $0.50.

Also, please review rules on using hyphens after -ly adverbs. (Really sorry to mention this, but it happens often here.)

That’s like the red quarter at the laundromat I used to frequent. Free Laundry!

I like the idea of a mystery vending machine that someone owns independently, and spits out random sodas that have nothing to do with the button selections. Especially if it goes for more obscure or regional drinks that often aren’t found in the area: Diamond Head, Jones Co., Weinhard Root Beer, Vernor’s, Moxie. If you must have your Diet Pepsi, go to the corner 7-11.

I used to live 3 blocks from there, never noticed this.

If Capitol Hill isn’t the first Seattle neighbourhood you’d think of for surviving weirdness, I’d still put it in the top 2.

So it probably belongs to the folks that own the building right behind it. It is after all attached to their concrete ramp.

I used to live a few blocks from that, 10 years ago. And, yea it was there then.

Probably gone before another decade, that street is condo-izing rapidly now.

Building to the left, ethiopian restaurant… ten years ago anyway…

I know this machine. I used to live on Capitol Hill and my wife had an apartment three blocks from it. That thing has been there forever. I don’t know about any mysteries.

I did something similar to this when I ran my screenprinting studio in Toronto. I had a Coke machine from the 70’s that I put in that cost me nearly nothing and only accepted quarters since it was so old. I filled it with random cans of all kinds of weird shit, plus regular pop, and a few beers. I also created custom buttons in the style of various pop brands that explained the setup.

Maybe there’s a Time Lord with a TARDIS that can still disguise itself doing some long-term parking in Seattle.

I love how the “solution” doesn’t actually explain who or why the machine is stocked, only proving that people have been seen stocking it. Because that was seriously in question, or something?