Sinema… She’s mad that she’s no longer a person who can command attention in the Senate, so she’s finding a way to bring attention back to herself…

Not surprising at all.* She was always a power-hungry and attention-seeking snake in the grass. Once she lost her leverage with the Dems she was going to quit the party.

[* well, maybe a bit of a shock to the Dem establishment that’s spent years rewarding Sinema’s and Manchin’s bad behaviour.]

I didn’t think her career had any logical steps.

Now we can’t even primary her…

“Nothing will change about my values or my behavior,” she said. “I will continue to enrich myself while ignoring the needs and wants of my constituency. I’m basically a black hole for attention and this will allow me to ensure that I remain the focus of it”

At least she is very honest about what she is doing

She doesn’t seem to have any core political or moral values at play… I can only guess she’s in it for the power, money, and attention.

In four years, the Republicans might, assuming that she runs.

eta: Two years. I thought she was in the 2020 batch for some reason.

That part right there. The EXACT same thought I had.

Not really that much of a shock. The dems know they have to hold on to every vote they can get because their coalition of “people who are not the Republicans” is slim and always will be prone to fracturing. It’s far harder to be the big tent party.

Now we can’t even primary her…

Now she can’t run as a Democratic party member and it’ll be even harder for her to hold onto the seat. She’ll have to effectively get people from both parties to see her as the better choice. There’s almost no Democratic voter who will at this point, and Republican voters NEVER vote for anyone but GOP people (they will sit out rather than vote for another party).

She knows she’s toast. This was her way of sticking a thumb in the dems eyes and trying to gain more attention for herself. What it WILL likely do is toss that seat back to the GOP because she’ll try and run as independent and it’ll probably split off just enough votes from the democratic primary winner for her to tank their chances.

So, I guess she’s now an IINO?

First, Good riddance. Secondly, I wonder how much of this switch is to avoid a likely losing primary campaign in two years? If she runs in two years as an independent against Democratic and Republican opponents, my guess is Republicans re-take the seat.

It’s far harder to be the big tent party.

There’s no need to make it harder by getting a reputation for giving someone this obviously disloyal and treacherous all those committee assignments and chairs. A big tent doesn’t have to be led by doormats.

Sadly, there’s a good chance that the party will let her keep some of those committee positions to keep placating her.

I didn’t think her career had any logical steps.

I posted this in another thread, but while her net “favorability” ratings are underwater by double digits in every single demographic, she’s “only” got a net unfavorable rating of 10% among independents so I guess she’s going to, well, not exactly where the love is but to where she’s hated the least.

She’s apparently delusional enough to believe that she’s got a shot at re-election. The chart in this article is pretty remarkable. She’s got double-digit unfavorable ratings in every single demographic. [image] 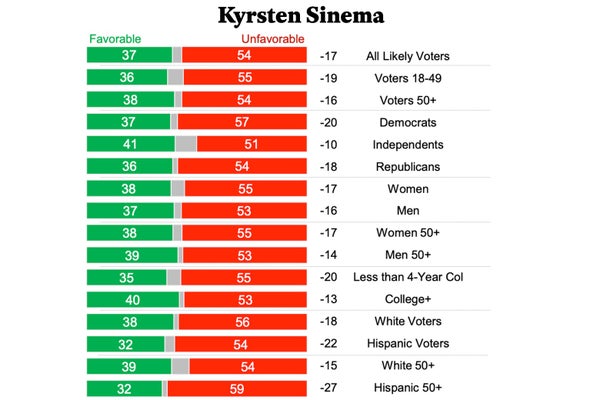 A big tent doesn’t have to be led by doormats.

Have you MET the Democratic party?

I’m only half joking there. With some exceptions, they are the definition of milquetoast.

Next campaign season, Republican sources are going to offer her a LOT of money if she will officially change affiliation from Independent - after the election, of course.

Good riddance in general, but couldn’t she have waited a couple years?
Does this mean the Dems won’t get majorities on committees now?