Seth Green's "Bored Ape" stolen, putting in jeopardy the TV show it was set to star in

Yeah, this sounds like bs to hype this project.

The Ape is a lie. 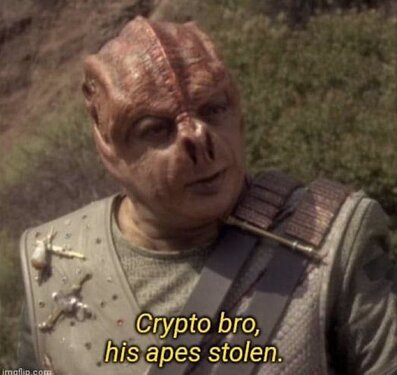 I guess he doesn’t realize he can create his own image of an ape any time, and even turn it into an NFT if he really wants.

No, we’re not f**king doing Stonehenge.

These things are frequently sold with the promise, explicit or not, that you can somehow monetize your ownership, for example by creating a TV show. This guy apparently both believed that and tried to turn it into reality. Even if this were legally possible, why some cartoonish ape that looks pretty much like any of the other cartoonish apes would be valuable in this way is a mystery.

Harold’s cat, disturbed by his laughter.

It is a sign of the times that I knew who “Bored Ape” is, but had to Google “Seth Green”.

Not a Buffy fan, eh?

Big Buffy fan at the time; poor memory for names.

It’s marketing hype bullshit scam action in progress. He transferred it to a friend’s wallet to drum up all this free press.

On Saturday, Green teased a trailer for White Horse Tavern at the NFT conference VeeCon. A twee comedy, the show seems to be based on the question, “What if your friendly neighborhood bartender was Bored Ape Yacht Club #8398?”

Guess we’ll have to reconcile ourselves to the certainty that we’ll never learn the answer to that age-old mystery.

In this case it sounds like the publishers of the NFTs actually have issued a license that confers rights to the intellectual property associated with the NFT to the owner of the NFT. It’s unclear whether this actually means anything legally (though IANAL) but it’s at least a bit more substantive an ownership claim than the fools who thought getting an NFT of the Jodorowsky Dune book would give them the rights to sell its content.

Further thoughts: One thing that makes NFTs weird is that possession becomes 10/10ths of the law, at least as far as the NFT per se is concerned. If we were actually going to countenance an economy where mere possession of a digital artifact confered some kind of concrete ownership of something of economic value beyond the artifact itself, suddenly we’re in a weird universe where stealing the digital ducal signet ring could mean that you magically become the ruler of the digital dukedom.

Doesn’t this sort of completely destroy the value premise of NFT’s (or any crypto asset)?

If they can be stolen or scammed, how exactly are they more secure than any other certificate of ownership?

The “null hypothesis” is pretty straightforward

The silver lining is that nothing of value was lost.

If they can be stolen or scammed, how exactly are they more secure than any other certificate of ownership?

They’re not. The only “security” provided is that GET YER GUMMINT HANDS OFF MY PROPERTY – you can’t force someone up to give their credentials and do a transfer. On the other hand, since the only source of truth is The Ledger, if you get scammed into giving up the thing, there’s no recourse – The Ledger says they own it now, so they own it now.

Basically, permissionless blockchain is a way of formally implementing one of the most problematic systems pathologies: “If it isn’t official, it hasn’t happened”.