Mmm - I only have 7 of those on CD or digital. Odd they picked NAIVE for KMFDM. I’d have gone with ANGST or NIHIL. I JUST found the original NAIVE for < $10 at Vintage Stock late last year. Soooo stoked. Been 20+ years looking for it.

ETA - Oh and TKK’s Confession of a Knife is a great one too.

It may not have won official status as “industrial” but I just wanted to give some love to
https://en.wikipedia.org/wiki/This_Is_the_Day...This_Is_the_Hour...This_Is_This! 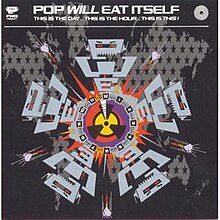 Wasn’t familiar with some of the newer bands, but have many of the older albums in one form or another… It’s a solid list, I think.

Also, right now listening to this… which I think I should pick up.

Solid list with quite a few I need to spend time investigating. Probably not a strange coincidence I spent yesterday listening through Skinny Puppies early catalog and the day before watching early Einsturzende Neubauten after listening to the video here about the girl that can’t find her ecig and some people complained her scream was unsettling and I thought of one of my favorite screams.

Ahh, some good mainstays in there and a few I’m unfamiliar with. Thanks!

A friend of mine runs an Industrial stream. Lots of noisome goodness!
http://www.ampedout.net/

I scored a white vinyl copy of that in the mid-90s. Such a good album.

Love to see a release of Hit & Run Holiday on wax…sigh…not industrial, but their most fun album by far.

Love to see a release of Hit & Run Holiday on wax

That’s a great album too!

Great list. There are a bunch here that I would have added, too (Tactical Neural Unit, Disco Rigido (LOVE that record), The Process, Man Amplified, Tyranny For You).

I’m glad Cabaret Voltaire made the OP list. It feels like they sometimes get lost in the shuffle of history.

Die Warzau is one of those great bands people forget about, for some reason…
now i know what i’m listening to, this afternoon

I wanted to pick nits as is the first impulse when seeing a best of list, but that really was a good list. There are some albums I haven’t listened to and some artists where I would have chosen a different album (I love Ebbhead from Nitzer Ebb) but really you couldn’t go wrong listening to those 33 albums.

Yes I would have loved to see some Clock DVA. Man amplified is such a great album. Oh man I know what I’m listening to tonight!

Also agree this is a great write up. Appreciate the acknowledging of T.G.'s original concepts attached to the industrial moniker - my read on it was always that their idea alluded more to the inhumanity/mechanization of the boardroom than the factory floor in it’s original formulation i.e. 2cnd Annual Report, (among other industrialized aspects in their imagery to be sure). The secret history of the intertwining of hip-hop and industrial getting it’s due is also refreshing.

Including Mica Levi’s Under the Skin soundtrack was unexpected and totally on point - loved that score, it really makes the film.

Current mood as the edibles kick in.

Front Line assembly - Flavor of the Weak. Although I guess many would call it synth-pop relative to your list.

PWEI would have definitely been industrial if they had officially released A Lick Of The Old Cassette Box. That’s close enough for me, I don’t believe in hard lines between genres.

I’ll admit that I have only ever explored the edges of industrial, even as bands and DJs who I respect talk about how they were influenced by it. Maybe I should start looking into it now.

My current daily playlist is mostly frenchcore with some gabber and millennium hardcore thrown in for variation.