Silicone dish scrubbers: because I'm tired of being told kitchen sponges are gross

Sharing a kitchen with a sloppy person, this very thing has been on my mind also.

You can throw your kitchen sponge in the wash with everything else.

Wait, so sponge isn’t one of those words that bbs censors?

I imagine this is only for people who wash their dishes in a sink full of soapy water. Like a few of the reviews mentioned, these do not retain water or soap which doesn’t really work for my cleanibg style.

You can throw your kitchen sponge in the wash with everything else. 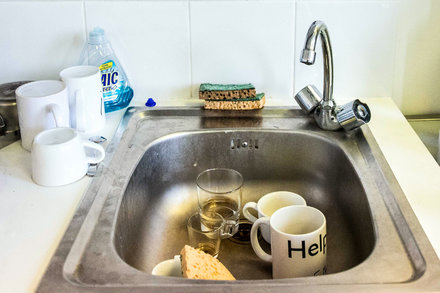 Researchers found that microwaving, boiling or throwing used sponges in the dishwasher encouraged the proliferation of its strongest microbes.

I microwave my sponges once in a while. Should get rid of everything nasty if I nuke it long enough?

You get health care. @orenwolf

Should get rid of everything nasty if I nuke it long enough?

Not according to the article I linked.

About $1/apiece from aliexpress, including shipping.

There should be a way one could make microdonations to BB every time one buys something on their recommendation but uses a cheaper supplier than their affiliate link.

I tried that once. But I didn’t know that the sponge had to be wet… My microwave caught fire…

How do they work on things like cast iron pans? I’m looking for something that will remove the crusty fried on bits but not the rest of the non-stick seasoning. I wanted a bamboo scrub brush, but none of the ones on Amazon look worth the price.

After coming to the same conclusion about bamboo brushes, I’ve been using an Oxo grill brush on my cast iron pan since April. No complaints.

We’re a wand household for stuff that doesn’t go in the dishwasher:

The sponges are replaceable and we swap them out weekly, so it costs us about $5/month. I’d love to use something reusable like these silicone pads, though. Worth a shot.

I hand wash dishes. A few times a week I include a tablespoon or so of bleach in the wash water and this keeps the sponge fresh as a daisy.

a gallon of bleach lasts forever and is much cheaper. i rinse our sponge in bleach water from time to time, and change it out entirely once a month. works for me!

also, for scraping hard bits off of cast-iron, i use these:

How do they work on things like cast iron pans? I’m looking for something that will remove the crusty fried on bits but not the rest of the non-stick seasoning.

That’s what I’m moving off of!