that is really neat. and kind of creepy if those are real planes with real pilots…

( also interesting that it seems nintendo was into the two panel displays long long before ds. wonder if there’s any direct connection there )

I’m guessing the two displays are more so it can quickly flip between them. Sort of like how with Dragon’s Lair and its siblings controller inputs were simply changing chapters on a LaserDisc (which kind of kills the magic once you know this).

But yeah Nintendo does have a long history with dual screens. The Game & Watch series in particular is regarded as their original entry into this space: 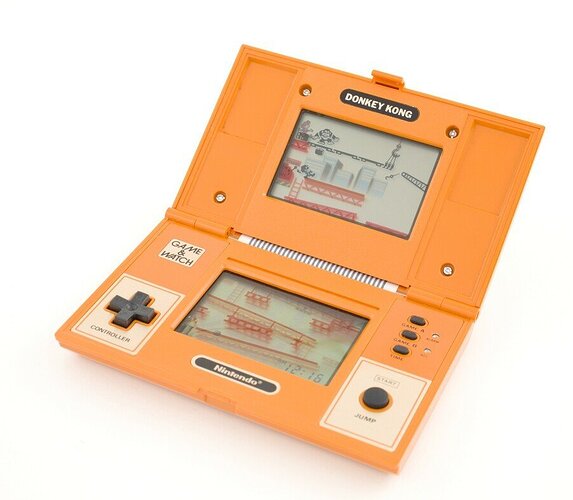 I mean, that’s totally a proto-DS that predates the DS by some 22 years.

I don’t know if I played that particular one, but there was genre of them, going back years before 1976.

I’m guessing the two displays are more so it can quickly flip between them.

OK, so I think I know exactly what’s going on with the two screens. The second screen has a white dot that traces the path of the plane. When the player pulls the trigger on the cabinet’s gun, presumably the console shifts a mirror to switch the display between the two halves of the image. This briefly puts the light dot exactly where the plane was, allowing the console’s gun – using a version of the same light gun technology that would eventaully appear on the NES – to register (or not) a hit. If a hit is registered the mirror is locked in place to display the explosion, otherwise it quickly returns to its initial position.

I’m not sure how it might have addressed the timing delay between when the targeting dot appears and when the explosion film begins; maybe they just dealt with the light dot staying on the screen for a fraction of a second, or maybe it was actually some kind of double-image system where the two images were overlaid on each other.

[Disclaimer, this is (well-informed) speculation, not actual knowledge.]

I vaguely remember playing that at a local amusement park. They also had a quick-draw western game that used live footage.

Yeah, before 1977’s Space Invaders standardized what an “arcade game” should be like (i.e. sprites moving on a video screen), arcade machines had a wide diversity of options. Some used filmed images, others used actual physical models of cars or planes or motorcycles in the machine, others were basically modified pinball (I remember playing a baseball game where you had a bat that was basically a pinball flipper and the baseball was a pinball).

The Game & Watch series in particular is regarded as their original entry into this space:

I still have mine! Identical to the one in the picture - dad bought it back from Tokyo and I thought it was the best thing ever.

You forgot Pong lol! Funny you mentioned the physical models…at that same park, they had some helicopter-type one that was wired to a central tower, and a backhoe game where you had to pick up coffee beans & dump them in the hopper…such good memories!

I remember playing Flying Ace, which used similar technology but was set in WWI in which you were fighting another biplane.

OK, so I think I know exactly what’s going on with the two screens

that link @kmoser cited has a pdf of the lower cabinet and some descriptions of doing alignment from a similar game, i can’t really tell but it does sound something like that.

( there’s maybe a targeting disk that aligns with the plane? and that’s what the light shoots through to register a hit, rather than - like with duck hunt - the gun actually looking at the screen. maybe. )

there was also this image of the skyhawk cabinet 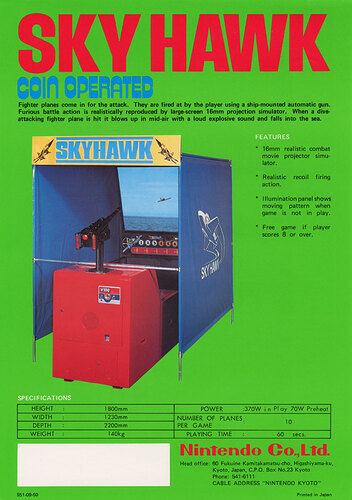 Looking at the Flying Ace instructions, I wonder if you’re right that the gun is not targeting the screen directly. From those instructions it sounds like Flying Ace requires the user to track the target for some period to register a hit, and maybe that’s the way that Sky Hawk works. In which case it would make sense for the explosion to only happen at the very end of the targeting reel.

I think the reason that Flying Ace talks about “disks” is that it’s using a different technology to display the screen, but I think if you swap out disks for film then we’re probably close to understanding how Sky Hawk operates. I think there still needs to be some kind of mirror trick to get the explosion to switch in for the plane at the end of each opponent reel on a hit, but I think you’re right that the gun targets the lower half of the 16mm image at the same time the user sees the upper half through some other mirror-related trickery.

Oh i did play this game, and as a big fan of ww2 airplanes as a kid, i loved it! Played at time out tunnel in springfield mall in virginia . definately made for america as its an american machine gun and a japanese plane. 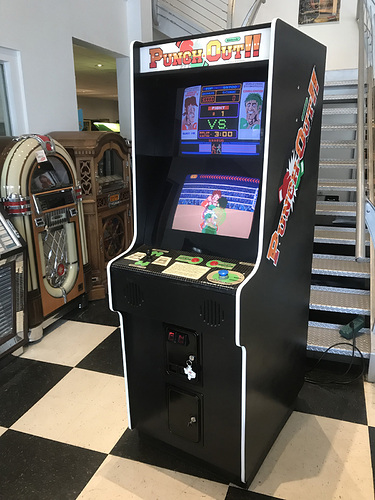 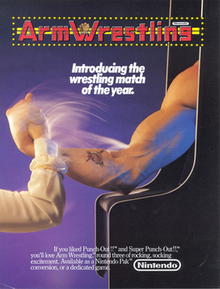 Arm Wrestling is a 1985 arcade game developed by Nintendo and released only in North America. As a spin-off of the Punch-Out!! series, and created by the same development team, Arm Wrestling has many of the same features, such as a dual-monitor system and quirky computer opponents. The game was developed by Nintendo R&D3, the same team that created the Punch-Out!! series. It is the final dedicated arcade game Nintendo both developed and distributed. The game's announcer uses some voice samples o...

I loved this one! I played it every time I went to an arcade on Route 9 in Framingham/Natick, Mass. They had it situated by itself in a dark area so you could really get immersed in it.

They didn’t have dual screens in reality, that’s just how the footage was posted on YouTube. There was one big screen as you can see in the cabinet image above and depending on whether you made a hit the plane video would either switch to the crash one or keep flying off.

I also loved Wild Gunman, where the cowboy’s eyes would flash when it was time to draw and shoot him. More at: