My first reaction: Slashdot is still a thing?

YC hacker news is today where Slashdot was before it sucked.

I spent many hours lurking (and much more rarely commenting) on Slashdot back in the day. Some of what I found there was actually informative, insightful or funny. They had a pretty good, and widely emulated, system for putting trolls in their rightful place. Sadly it doesn’t seem to have scaled very well, given that trolls now rule vast empires, not all of them virtual.

An important site for a while, despite some notorious bloopers. My vote for most memorable Taco/Slashdot quote: “No wireless. Less space than a Nomad. Lame.” (Re the announcement of the first iPod, for those who don’t remember.)

I’m still a fan of their commenting system. IMHO, it’s better than anything else (including Discourse). I wouldn’t use it on Facebook or even here, but on a tech site like Slashdot it makes perfect sense.

Unfortunately the comments slowly turned into a cesspool of Gamergate types, right-wing trolls, and other reactionaries.

Sheesh, I probably haven’t logged in for the past 10 years.

I lurked and posted there from about the mid 90s until maybe 2010. But after they sold it to Dice it just slowly got less and less cutting edge, and the smart people left, leaving the comments sections to the trolls. These days I get my broad tech news fix at Ars. But I agree that the moderation system was/is still one of the best and I wish more sites had taken up the model.

I’ve heard that 20 is the year of desktop linux.

And it’s been at least 10 years since it really started to go downhill. 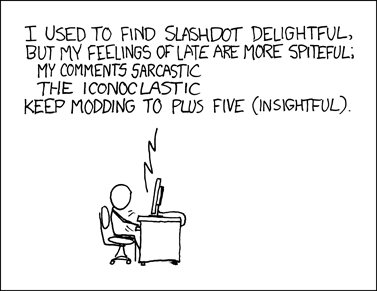 Got to agree that the moderation was smart. Decent categories, and a limited score.
And as a commenter, it was good seeing the moderation progress, with each “Insightful” or “Interesting” making you feel better about it. If more sites did that, it’d be great.

My first reaction: Slashdot is still a thing?

Yea. I still glance over it, but it’s kind of sad. It’s kind of a hollow shell at this point, and became that way when it was sold.

I never created an account there, although I remember the day they made logins live. My first thought was “hmm, why do they want me email address? Well, they’re not getting it!”

But I agree that the moderation system was/is still one of the best and I wish more sites had taken up the model.

Unless you’re an AC (as I always was, see above). Even with a relevant post you have almost no chance of it being seen.

It is… and I still have it in my news feed but I haven’t commented or bothered to read the comments in over a decade. I think it’s kind of sad what happened to it.

They left out Jon Katz…

This is a biased stroll down memory lane!

Not just that; the bloat and being beholden to advertisers means that just about any time I visit /., I’ve already read most of the stories a day or more before elsewhere.

Without current news and a decent discussion forum, there’s little incentive to visit the site.

YC hacker news is today where Slashdot was before it sucked.

It’s not a totally unfair comparison – they have some similarities – but the feeling of Hacker News and Old Shashdot are/were really different. A lot of the same types on readers, but something is different.

Probably just the fact that it’s 20 years later. Slashdot started in the height of the exuberance of the Internet. Today it is much harder to remain exuberant.

I kind of miss the days were one could be optimistic about technology… before Google, before Facebook, before…

“No wireless. Less space than a Nomad. Lame.”

As someone that once owned a Nomad I remember feeling similarly. I mean, FFS, I had like 20GB in my Nomad. Way more than that iPod and its paltry 5GB.

Then I actually tried one and was sold.

Today it is much harder to remain exuberant.

I kind of miss the days were one could be optimistic about technology… before Google, before Facebook, before…

And everybody say, “yatta!”

Used to go to Slashdot all the time in the late 90’s early 2000’s, but it really changed after it was sold. It’s a shame that such a great site is now more or less a footnote. I miss the comments by CmdrTaco and Cow orker and the generally intelligent discussions in the comments. I guess it was one of those right place at the right time during the early burgeoning years of the world wide web.

Missed, but not forgotten…